Seducing and killing his victims

Manipulate others
Fighting
Mocking his father

Kill his father and avenged his mother's death. (abandoned)

Kill and take over Romulus' empire. (Failed)
Ingrain himself as a friend to the Fantastic Four. (succeeded)
Get his father to kill almost all of his children. (succeeded)

Daken, also known as Wolverine II and by his real name Akihiro, is the biological son and former enemy of Wolverine, and a former member of both the Dark Avengers, and the Dark X-Men.

Raised by the immoral Romulus for half his long lived life, Daken is manipulative, narcissistic, extremely intelligent, and usually amoral. However, in rare instances he chooses not to kill others, though usually just because he feels they aren't worth his time.

One of the earliest known children of the long lived mutant wanderer and killer, Logan also known as Wolverine, the child that would one day be become Daken was born from the union of Logan and his Japanese wife, Itsu. In 1946, Itsu, while in the last stages of her pregnancy, was murdered by the Winter Soldier in an attempt to draw Wolverine out and return him to the custody of Madripoor. After Itsu's death, a man in black took the baby after cutting him from his mother's womb and leaving her body behind. The baby survived the incident, due to a mutant healing factor and physiology, which he inherited from his father.

The man left the baby on the doorstep of Akihira and Natsumi, a wealthy, young and traditional Japanese couple. They took the child's arrival as an answer to their prayers and raised him as their own. Though he was named Akihiro by his father, the servants and other families of his town secretly referred to the boy as Daken (駄犬, "mongrel"), a racial slur on his obvious mixed heritage. As Akihiro grew up, he was often teased by the other children of the town. This harsh treatment and his adoptive mother's indifference toward him caused Akihiro to develop a very cold persona to all except his adoptive father.

One night, Natsumi confessed to Akihira that she didn't love their adopted son and that, after years of trying to conceive, she was pregnant. Akihiro overheard this and felt his position in the household to be threatened. In 1955, after the birth of the baby, Junichiro, Akihiro confronted his mother, telling her that he had killed her son. When Akihira found out he disowned Akihiro, taking him into the forest behind their home and telling him to leave and never return. Daken furiously responded that "Akihiro" was not his true name. Natsumi then appeared, running at Daken and trying to kill him with a rifle's bayonet. The attack caused Daken's claws to extend reflexively, and with a flail of his arm, he accidentally slashed Natsumi through the chest, killing her. Unable to force himself to harm his son, Akihira instead committed suicide with the discarded rifle. Romulus then appeared to the boy for the first time since infancy, saying that he was what Daken would someday become.

4 years later and now in his teens, Daken would sent to a boot camp in Canada ruled by a Frederick Hudson, a man who had a familiar connection to him as he was his grand uncle, the same camp where his real father Wolverine had first trained more than forty years earlier. Daken was also trained by the same man as his father, Silas Burr. Burr trained Daken for 9 months before Daken disappeared one night. While two search parties were sent out to find him, Daken, at the behest of Romulus, reappeared in the camp and slaughtered every person there before confronting Hudson and Burr.

After killing Hudson, Daken then confronted his former drill instructor, during their fight, Daken attacked with not only his claws but also his power to ramp up and manipulate his own pheromones, using the ability to make Burr so giddy that he started laughing, confusing him and allowing himto draw first blood. Burr, however, quickly recovered, punching Daken across the room with so much force that he believed for a moment to have killed his former student. Daken got back to his feet after Burr turned away, holding a revolver which had been dropped by the last man he'd killed. Daken fired three shots into Burr's back and then prepared to fire one into his head, but Romulus appeared and stopped him, telling Daken that he had plans for Burr. Romulus then decided to bond the indestructible metal called Adamantium to Burr's skin, Burr survived the surgery and became known as the assassin/hitman Cyber years later.

While his actions are left unknown during the 60s and early 70s, in 1977 Daken is seen in the middle east on an assignment for Romulus as he kills a man. It was that, that the enigmatic immortal would tell his protégé that his real father was still alive and lie about the events surrounding his real mother's death. This lie sowed a seed of vengeance in Daken that Romulus continued to feed in the following decades.

This seed would start to take form and blossom as Daken joined the Red Right Hand, an organization dedicated to the death and everlasting suffering of the mutant killer known as Wolverine. During his time with them, Daken tracked down and found all the known illegitimate children of his father born from his years of wandering the world and forgotten relationships. Manipulating their common angry and grudges against their father, he would turned them over to the the Red Right Hand who on his advice trained them in order to use them as weapons and pawns against Wolverine. Daken knew that they wouldn't stand a chance against him but having his father inadvertently kill his forgotten children would hurt him in the worst way possible. Those individuals would later become collectively known as the Mongrels.

Modern Times and Meeting his father

Decades later, Daken would finally met Wolverine face to face for the first time in a century, after Wolverine was captured by the S.H.I.E.L.D., Daken disguised himself as a S.H.I.E.L.D. agent. Upon seeing his child he thought long dead, Wolverine would begin to cry. After seeing this emotional display, Daken was disgusted by his father as he deemed him weak, he then slashed and disbowled him across the stomach, killing him temporarily and leaving him to bleed on the floor, as his mother had been left many years before. Daken's action also "aided" his father in escaping from S.H.I.E.L.D., but not for benevolent reasons.

After disappearing Daken next arrived in Berlin at the home of a woman he had been been having a relationship. He led her to believe that he had been cheating on her with a man that he was actually just planning to kill for a passport. Knowing that she would drink an entire bottle of burgundy which they had purchased together, Daken secretly poisoned it with sleeping pills, making it appear that she had committed suicide as he stated that she was a footprint he was erasing.

Afterwards while walking through the streets of Potsdam, Germany, Daken was contacted by an anonymous messenger who reminded him of his displeased master's "ultimate goal". Daken dispatched the messenger in anger that he was being prevented from having the opportunity to confront his father on open ground as his master had promised him. Later he was on a train to Brussels, watching his father in a nearby stolen car. He then received a phone call from an unknown "friend", who was actually his former instructor and newly revived Silas Burr now known in the modern era as Cyber. Cyber confirmed his father's destination. After "helping" him escaped from S.H.I.E.L.D., Daken lured his father into a bank vault in Brussels that contained a Carbonadium synthesizer, Daken engaged Wolverine in a brief battle, with Daken demonstrating great fighting prowess similar to his father. The fight was interrupted however, by Cyber. He challenged Daken, one of his finest student, to combat in hopes Daken would take him to his supposed "master". 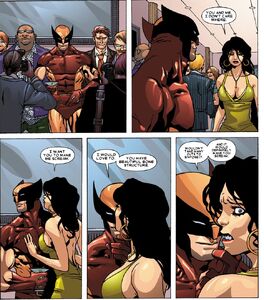 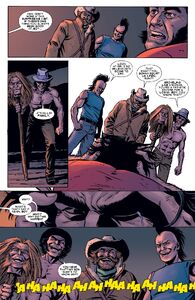 A version of Daken mocking and laughing at his father with his grandfather, Thomas, his uncle Dog, and Sabretooth.