Prevent himself and BOB from being returned to the Black Lodge

Find out the truth about Judy

The doppelganger of Agent Dale Cooper, also known as Mr. C, is a major antagonist in Twin Peaks and the main antagonist of the 2017 revival series of the same name. He is a Black Lodge entity created by Killer BOB, who used the doppelganger to escape the lodge and go on the run for the next 25-years.

He is the father of Richard Horne.

He is portrayed by Kyle MacLachlan, who also played Earl Raymond Diggs in Tales From the Crypt, Cliff Vandercave in The Flintstones, Isaac Izzard in The House with a Clock in its Walls, Donald Love in Grand Theft Auto III, King Claudius in the 2000 film adaptation of Hamlet, and Calvin L. Johnson in Marvel's Agents of S.H.I.E.L.D.

When the doppelganger woke up, he asked how Annie (Cooper's girlfriend) was, and excused himself to the bathroom to brush his teeth. In the bathroom, he squeezed the toothpaste into the sink, looked in the mirror and smashed his head into it. This alarmed Sheriff Truman and Doctor Hayward, who knocked on the door to check if "Dale" was alright. The doppelganger looked into the mirror, with the reflection of BOB looking back. He turned his head to the door and began to ask "How's Annie" repeatedly, and burst into maniacal laughter.

The doppelganger was taken to hospital for his head injury. There he raped a comotose Audrey Horne. After this, he left the town of Twin Peaks and cut off contact with the FBI, who were unaware of what happened to Dale Cooper. A couple or so years later, he visited Diane - the former secretary of Dale Cooper, and began to question her about the FBI. She knew there was something wrong with Cooper, and the doppelganger sensed her fear and proceeded to rape her. He took Diane to the gas station and created a duplicate of her which assumed the real Diane's identity.

The doppelganger was destined to return to the lodge 25 years following his escape. Along with BOB, he created a second doppelganger of Dale Cooper called Dougie Jones, in the hope that he will be instead taken back to the lodge in the doppelganger's place. In the next 25 years, the doppelganger began running his own crime syndicate, and was feared by both his allies and enemies for his ruthlessness and cold demeanor.

25 years following his escape from the lodge, the doppelganger attempted to make contact with former agent Phillip Jeffries. "Jeffries" stated that the doppelganger will be returned to the lodge soon, and that Jeffries will once again be with BOB. This bothered the doppelganger, who wondered if it was really Jeffries on the line.

Whilst driving, the doppelganger felt sick, as he was due to be returned to the lodge. Pulling over to the side of the road, he held in his vomit whilst watching the clock, which began to emit electric sounds. After Dougie Jones was taken to the lodge instead, the doppelganger began to vomit a yellow substance, before then passing out. The unconscious doppelganger was discovered by police, with one of them becoming seriously ill after being exposed to the sick. The doppelganger was recovered and taken to prison after officers found a machine gun and a leg of a dog in his trunk. Dale Cooper's former FBI colleagues Gordon Cole and Albert were informed of "Cooper's" imprisonment.

Mr. C intimidates the warden into releasing him into the custody of his henchman Ray Monroe, who drives him out to the middle of nowhere and turns on him, shooting him twice in the chest. As Mr. C falls to the ground, however, a group of ghostly Woodsmen appear and revive him as a terrified Monroe drives away.

Shortly afterward, Mr. C arrives at his gang's hideout, kills Monroe, and takes Richard Horne with him on a job in Twin Peaks after learning that the young sociopath is Audrey Horne's son. They drive to a field near Twin Peaks, which matched two of the three coordinate sets Mr. C had acquired from Monroe, Phillip Jeffries, and Ruth Davenport. He tells Richard to take a tracking device and locate the exact spot for him. Richard climbs onto the rock and follows the device's beeps. Just as it becomes a constant tone, Richard begins lighting up like a torch as he is electrocuted, screaming, and then apparently disintegrates. Mr. C says, "Goodbye, my son.".

Mr. C arrives in Twin Peaks and goes to the Sheriff's station, where Cooper's old friends Andy and Lucy Brennan welcome him, believing him to be Cooper. However, their suspicions are aroused when Mr. C turns down a cup of coffee, something the real Cooper never would have done. The real Cooper suddenly bursts in and reveals that Mr. C is an imposter. Lucy then produces a gun from under her desk and shoots Mr. C in the back, killing him. BOB emerges from Mr. C's body, but is himself destroyed moments later by prisoner Freddy Sykes, who punches BOB with a supernatural glove given to him by the Fireman; Freddy pummels BOB through the ground hard enough to open a hole to Hell, then knocks the orb into the stratosphere, shattering it into pieces that fall into the pit of fire and finally destroying BOB once and for all.

In the Black Lodge, Cooper's doppelganger is shown trapped in a chair and covered in flames. 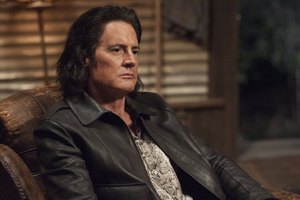 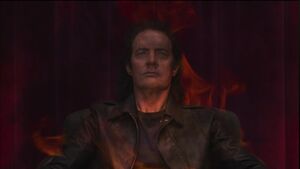 Retrieved from "https://villains.fandom.com/wiki/Dale_Cooper_(doppelganger)?oldid=3945409"
Community content is available under CC-BY-SA unless otherwise noted.