Get revenge against Dan Otey (succeeded)

Get back his daughter (failed)

Dale Schrader is the main antagonist of the Criminal Minds episode "Retaliation". He is a bank robber who attempts to carry out an elaborate plan to get revenge against the accomplices who betrayed him and sent him to prison years earlier, as well as reclaim the money he stole and kidnap his young daughter.

A lifelong criminal, Schrader robbed a series of banks throughout the 1990s before he his accomplices Dan Otley and Joe Muller, the latter an undercover police officer, sold him out to the police in May 2001. He was arrested, and imprisoned for eleven years. During his incarceration, he obsessively planned a detailed scheme to get revenge against his former accomplices, get the money he had stashed away before his arrest, and kidnap Jenny, his daughter with his ex-wife, Connie.

Two days after he was released from prison, he kidnapped Muller's wife and children. He left them in a crack house frequented by Stacy Ryan, the addict sister of one of his former cellmates, and hired a group of addicts to guard them. He threatened to kill them unless Muller gave him the key to the police storage locker where his money was kept. He then kidnapped Jenny and killed Stacey because she was a liability. He took Jenny to a cabin on the Canadian border. Local contact the FBI's Behavioral Science Unit (BAU) to profile Jenny's kidnapper.

BAU agents Emily Prentiss and Derek Morgan track Schrader down and arrest him, and Prentiss rides with Bunting, a local police officer, as he takes Schrader back to prison. On their way, however, their car is hit by an utility truck driven by Muller, who fears that Schrader will kill his family unless he does as he is told. Schrader strangles Bunting and escapes with Muller. He tries to kill Prentiss as well, but Muller stops him.

After ditching the truck, Schrader goes with Muller to the latter's house. Muller tells him that he won't be able to get the key until the next day, so Schrader makes him drive them to Otey's house. On the way there, Schrader offers Muller the chance to kill him, but Muller refuses. Schrader knocks on Otey's door, which Otey's young son answers. Before the boy can close the door at his father's order, Schrader shoots it twice, barges in, and kills Otey right in front of his son.

At Schrader's command, Muller reluctantly forces Otey's wife and son into another room and lock themselves in. Schrader and Otey go back to the latter's house, where they get into a brief fistfight. Once again, Schrader tries to goad Muller into killing him, but once again Muller refuses. A few hours later, they drive into town and locate the key.

Moments later, however, Prentiss and Morgan ambush them, having figured out Schrader's plan. Schrader takes Muller hostage and taunts the agents, daring them to shoot him. He then realizes that his situation is hopeless, however, and commits suicide-by-cop by pointing his weapon at Morgan, forcing both agents to return fire and kill him. Prentiss and Morgan then reunite Muller with his family and rescue Jenny. 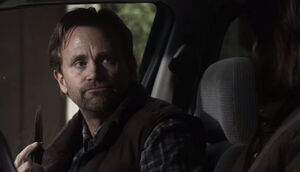 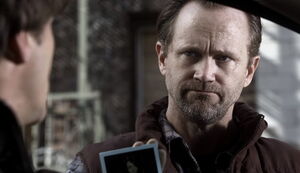 Schrader informs Muller that he has his wife.