Dalia Margolis (Hebrew: דליה מרגוליס) is one of the two opening antagonists (alongside Viktor Novikov) of HITMAN, appearing as one of the two targets of its first mission "The Showstopper". She is a retired supermodel and the ringleader of IAGO, and is assassinated by Agent 47 alongside her boyfriend Viktor Novikov.

She was voiced by Mary Elizabeth McGlynn, who also voices Nina Williams in the Tekken series, and also voiced Maria in the HD collection of Silent Hill, Echidna in Devil May Cry 4, Alex Wesker in Resident Evil: Revelations 2, and Cetrion in Mortal Kombat 11.

Margolis was born in Israel as the daughter of a hawkish Israeli military general. Following in the footsteps of her father, she become a Mossad agent and used her modeling career to gather confidential information for them. Her intel lead to the arrest of The Mongoose in 2007, and the successful drone strike against Red Sabre in Lebanon. She later established the IAGO spy ring with Viktor Novikov, with which they offer for sale of national and private sector secrets for their personal earnings.

She is generally acknowledged as having been one of the world's most successful supermodels since she retired and originated her own modeling agency. She and her partner and boyfriend, Russian oligarch Viktor Novikov, are a famous power couple in the fashion industry.

Margolis hosts IAGO's "auction of secrets" under the guise of Novikov's fashion show. She meets with Helmut Kruger in order to persuade him to spy on a consulting firm's CEO and also a sheikh. In addition, Dalia intends on killing her assistant, Valerie St. Clair after the auction, knowing that she is a spy. Agent 47 eliminates her and her boyfriend before escaping.

Dalia is the true brains behind IAGO. Using her intelligence, beauty and charisma, she effortlessly manipulates and exploits people in order to get what she wants. She is extremely conniving, planning her global espionage from the shadows while hiding behind her persona as a retired supermodel. She sees others as pawns for her schemes and will instantly remove them when they are no longer useful, such as conspiring to assassinate her boyfriend when he becomes too volatile.

She is also ruthless, ordering the deaths of anyone she sees as coming close to thwarting her, such as her assistant who is an undercover spy for Dalia's rival. In contrast to her perceptive ability, she's also extremely relentless, wanting to tie up any loose ends even if some people posed no threat to her whatsoever.

Unlike Viktor, who genuinely loves her, Dalia sees him as nothing more than a meal ticket, and uses him for his power and wealth. She doesn't see highly of him and has nothing but contempt for the majority of her underlings.

In spite of her coldness and aloof persona, she is snarky and maintains a sense of humour, usually making flippant remarks as a response to Viktor's pretentiousness. She's also motivated by wrath, using her global espionage ring as a way to get back at her father, a MOSSAD officer. 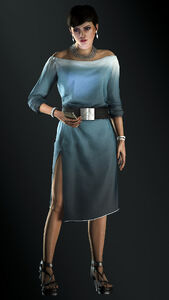