Beavis and Butt-head Do America

Dallas Grimes is the main antagonist of the 1996 animated satirical comedy film Beavis and Butt-head Do America.

She was voiced by Demi Moore, who also played Madison Lee in Charlie's Angels: Full Throttle, Sarah Robertson in Margin Call and the General in Animals.

Her role is first mentioned in the movie when Muddy is asking a friend to send men to have her killed and to take the X-5 Unit. She is first seen when Muddy hands a picture to Beavis and Butt-head when he mistakes them for the hitmen. Muddy assigns them to "do" (murder) his hot wife and offers an amazing award for it.

When Beavis and Butt-head find her in Las Vegas, Dallas is about to shoot them when she meets them in her hotel room, although she realizes they are practically harmless and really stupid. She asked them how much Muddy was paying them to kill her, Butt-Head said, "10 uh." Dallas took that as an insult, "10 Grand. Oh that Cheap-Ass." She at first asks them to go and "do" Muddy for twice the money, although it is then when she realizes that they think to "do" is to have sex. When Beavis takes his pants off and fights Butt-head on who gets to "do" her, she takes the pants and sews the X-5 Unit into it.

Later on, she's given a cavity search by ATF Agent Hurly and confesses that the unit is really is in the pants of one of the boys. In Washington D.C., Muddy decides he should just kill her himself when the duo go missing, until she seduces him when she says that "They'll both kill them." When they are arrested, Muddy thinks that they are back together, but Dallas betrays him believing that she'll be let free if she helps the ATF put Muddy away for life, only to suffer the same fate and they are both placed under arrest. She is last seen in the secured truck when Tom Anderson is mistaken for the real suspect and thrown into the truck under arrest.

Dallas is an opportunistic, charismatic, and seductive woman with a great of intelligence and wit always being able to stay one step ahead of her enemies. On top of this however she was also incredibly cold, sadistic, traitorous and dangerous. 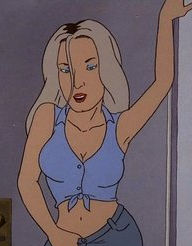