Damage, real name Jamie Ortiz, is a supervillain from Marvel comics and an opponent of The Punisher and Wolverine.

Damage led a street gang known as the Bunsen Burners. Their reign of terror throughout Manhattan drew the attention of the Punisher. Damage learned that the Punisher was after him, and attempted to ambush him. Damage led his gang to try to capture or destroy the Punisher's war van. However, the automated defenses of the van proved too much for his gang—they were all killed. Damage himself actually succeeded in breaking into the van, but he was disabled by a set of mechanical tentacles within the van. He fought so hard to get free that he broke virtually every bone in his body...and still remained trapped. The Punisher found him, still struggling and cursing, and decided to send him to the hospital rather than the morgue, to let him live a life of agony, completely crippled.

The Kingpin, having heard of the reputation of Damage, sent one of his men to rebuild Damage to be part of an elite team of assassins. Damage's badly injured body almost died after surgery, but his desire for revenge on the Punisher allowed him to pull through.

The Kingpin made a deal with Donald Pierce of the Reavers. Pierce granted the Kingpin access to a set of designs to rebuild Damage into a much more powerful version. These designs were granted at no charge in return for the promise to kill the Punisher within ten days, or a penalty of ten million dollars would be required.

Wishing to disgrace Castle before killing him, the Kingpin also had his agents rebuild Damage to appear as a double of the Punisher. Damage then traced the Punisher's steps, executing innocent victims at the sites of his battles. While Castle attempted to determine who was committing these killing, the deaths also drew the attention of Wolverine. Wolverine followed the trail back to Damage and attacked him. While Castle was occupied with his old foe, yet another agent of the Kingpin, the Sniper, Wolverine and Damage ripped each other to shreds. The two had incapacitated each other by the time Castle arrived. Castle pulled the impaled Wolverine off of Damage's arm-remnant, but Damage, like any good grade B horror villain, suddenly arose once again and dove at Castle. The Punisher threw a lit lighter at Damage, who had been covered in toxic chemicals during his previous struggle, he instantly burst into flames and then exploded.

The Kingpin recovered Damage's remains, preserved them in cryogenic suspension, and sent them to Pierce, along with an additional 40 million dollars as commission to rebuild Damage.

Jamie Ortiz/Damage appeared in 2005 video game The Punisher as a minor antagonist, serving as a main antagonist in first mission in game.

In the game, he works with the Gnucci Crime Family, dealing drugs for them. During the patrol, the Punisher witnessed a man being thrown through a window from Damage's crack house. The Punisher entered the building where he murdered all the gangsters, and when he found Ortiz, he interrogated him. The gangster revealed to him that he was tipped off that the Punisher would come for him, and was then thrown out of the window, dying on the spot.

When the Punisher left, assassin commissioned by Gnucci tried to kill him but failed, thus creating a conflict between the Punisher and the Gnucci Family. 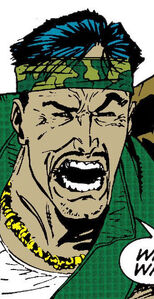 Damage as he appeared in his original body.