Tokio Ubaune (in the Japanese version)

Prevent the creation of the Yo-kai Watch (failed).

Dame Dedtime (also known in the original dub as Tokio Ubaune) is the main antagonist in Yo-kai Watch: The Movie and the final boss in Yo-kai Watch 2: Bony Spirits, Fleshy Souls and Psychic Specters

She was voiced by Kataoka Ainosuke IV in the Japanese version, and by Alicyn Packard in the English dubbed version.

When she was a human, Dame Dedtime was arrested for a crime that she did not commit and rotted in jail with her entire life wasted. Ever since then, she became a Youkai and was obsessed with stealing time from everyone with aid of Kin and Gin.

Dame Dedtime is not shown until the player defeats Kin and Gin. When the player defeats Toadal Dude (in Bony Spirits or Psychic Specters if the player sides with the Bonies) or Arachnus (in Fleshy Souls or Psychic Specters if the player sides with the Fleshies), it is revealed that her Wicked Yo-kai started the war between the two factions disguising themselves as normal Yo-kai. Then she's revealed to the player and their grandfather. Then, the two faction leaders, Toadal Dude and Arachnus, started to attack her. But the attack was blocked by Unfairy, one of the Wicked Executives. As they see it's too powerful for them, even with their powers combined, plus naming then "his new toys", the two formed a seal to contain him to not do any more further damage. After the player completed "Master Nyada's Trials" and defeated Unfairy, Dame Dedtime sends the player to his timeline, in an apocalyptic world where her Wicked Yo-kai had infected everyone under mind control. Including the player's parents and friends.

So, the player finds a Miradox so he/she can travel back 60 years ago and after defeated the other Wicked Executives creating a smoke to infect the people, the player and his/her grandfather goes to her lair and every time the player battles her, she will always regenerate to full health with the help of Kin and Gin, but after the player's grandfather defeated Kin and Gin with the help of his Yo-kai friends, the player can finally take her down. After defeat, Dedtime decides to absorbs the human positive feelings of Old Springdale, thus transforming herself into the monstrous Dame Demona. After Dame Demona is defeated and was sent flying with the help of the player's Yo-kai friends, Dame Dedtime is now imprisoned in the lowest floor of the Infinite Inferno for 60 years.

Dame Dedtime first debutes as a shadow at an abandoned warehouse, where Kin and Gin reports to tell her that Hovernyan traveled back in time with Nate to help his grandfather, Nathaniel, build the Yo-kai Watch after Kin and Gin took it away from him. Dame Dedtime became outraged that the Yo-kai Watch would bring Yo-kai and humans together if made.

She first appeared in front of Nate, Nathaniel, Hovernyan, Whisper, and Jibanyan. Dame Dedtime then uses her staff to encase Jibanyan in a cage, telling the group if they want him back, they must come to the Yuuhigaoka Factory in the third district of the town, and also having Hovernyan hit by Kin and Gin as she, Kin and Gin, and Bronzlow warp back to the factory with an encaged Jibanyan.

As Nate, Nathaniel, Whisper, and Hovernyan made their way to the Yuuhigaoka Factory, Dame Dedtime was unhappy with her henchmen's progress for possessing babies, nerds, and farm animals. She then began to scream, which wiped out some of her henchmen, and started muttering to herself, stating that she's angry when she's hungry. Just then, Kin and Gin reported to tell her that the heroes are on their way to save Jibanyan. Jibanyan became overjoyed after hearing this and then started insulting the old Yokai for their smell, annoying Dedtime and made her yell at him to stop, telling him that they smell fine. Kin & Gin explained that once they destroy them, the Youkai Watch will never be made, so that Youkai and humans would never be in harmony.

Dame Dedtime reencountered Nate and Nathaniel as they entered the factory. She then noticed Nate and Whisper operating the machine that was imprisoning Jibanyan and threatened them to get away from the controls as she stated that only license professionals are allowed to operate it. While fighting the Wicked, Nathaniel ran up to Dame Dedtime and was about to strike her, when suddenly, he was taken back in time by Kin and Gin who were using the giant clock. Not knowing what to do, a giant projection of Master Nyada appeared above them, who told them to use the hose that he gave them. Nate attached the hose to a nearby faucet and used it to spray the clock, thus destroying it.

Kin and Gin attacked them as Bronzelow was rebuilding the clock, but then Dame Dedtime disbanded them as she summoned the most powerful Wicked, Untidy. Hovernyan tried to take on the powerful wicked, but was struggling to do so. Nathaniel tried to help him, but was afraid after remembering a time when he let a friend of his down after the Wicked possessed some kids who bullied him. Despite that, Nathaniel acted courageously by throwing his bat at Untidy's head, completely destroying him. As Nate and Nathaniel went outside to call help from their youkai friends, thus creating the youkai watch, Dame Dedtime became outraged and began to drop Jibanyan into a pit of fire. Luckily, Nate reentered the factory with Nathaniel and their watches and summoned Jibanyan with it. He and Nathaniel then summoned all of their youkai friends to aid them. Dame Dedtime said she had more than enough after seeing all youkai and turned to Kin and Gin who resummoned the Wicked army.

While she was ordering the Wicked around during the fight, two youkai came charging at her, but were zapped by Kin and Gin. Kin informed them that once the clock is fixed, the youkai are finished. However, Robonyan targeted the clock and flew towards it, destroying it in the process. Then Shogunyan finished off Kin and Gin, along with their brother, Bronzelow. Just then, Dame Dedtime muttered that it is not over as she roared in frustration. Curious about why she was so evil, Nate ordered Tattletell to reveal her secret. Tattletell jumped onto her face, making Dame Dedtime reveal her past. She initially felt utterly depressed as she explained that she most of her life in prison, and then became furious as she vowed to get revenge on the rest of the world. She began to unleash a wave of energy that was tearing the factory apart, making both the youkai and the Wicked flee in terror.

As Nate and Nathaniel made it out of the destroyed building, they saw Dame Dedtime as a giant monster. The youkai tried their best to fight her, but she was immune to their attacks as Whisper pointed out on the youkai pad that she is made out of a million clones of her. In order to defeat her, the youkai fused all of their energy into the youkai watches. Nathaniel gave all the energy to Hovernyan, turning him into Darknyan. Nate was about to give Jibanyan the power until Whisper came flying in, also wanting the power, fusing him and Jibanyan together into Buchinyan. Darknyan flew Buchinyan around the monster while dodging her attacks. He then threw Buchinyan at her who started punching her several times, causing Dedtime and her clones to explode, thus restoring the present.

Dedtime resembles a large, elderly woman with wrinkled pale gray skin, black lips, black eyelids, yellow eyes, long violet nails, and purple hair styled in a courtesan-like fashion, complimented by a golden hairpiece with two red threads which end in golden tassels. Her attire gives her a regal appearance: she wears an orange noblewoman suit with a layer of lighter-shaded orange cloth under that and another dark green layer underneath it, fastened by an orange obi. She also wears a black haori lined in gold. She also carries a purple cane with a lime green handle.

After becoming Dame Demona, her body becomes serpentine-like and coiled, fuchsia in color. She gains four arms garbed in a black jacket. Her face becomes more beast-like with her eyes becoming pure red and circled by blue lines, and her head gains a set of eight hairpins below her hairpiece, with her hair becoming fuchsia-colored and ending in the sides with two spiked wing-like braids.

In the first film, her Kyodai Ubaune form is composed by tiny Dame Demonas, and the overall shape of her body resembles a serpentine creature. Also, Kyodai Ubaune has Dame Dedtime's hairpiece.

Dedtime is shown to be a manipulative and vengeful old woman who holds a deep grudge for humans due to the long time she spent in prison when she was alive; in her own words, since she was robbed of her precious time, she will do the same with the time of everyone. Dedtime does not seem to understand the bonds between humans and Yo-kai, which lead to her desire of preventing the creation of the Yo-kai Watch 60 years ago, which is further evidenced by her creation of the Wicked Yo-kai in order to sever the bonds between humans and Yo-kai and between themselves, by sparking the war between the Bony (Ganso in the Japanese version) and Fleshy (Honke in the Japanese version) armies and infecting the humans during the 60-year lapse.

Her negative qualities are further enhanced when she becomes Dame Demona by robbing humans of their positive feelings. She is also shown to be extremely obstreperous when she likes to shout "Duun- Duun-Duuuuuun!!!!!!" in the localized version, like a suspense sound effect while ending phrases of suspense or in a plot twist. 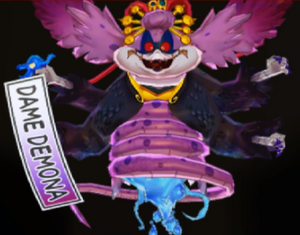 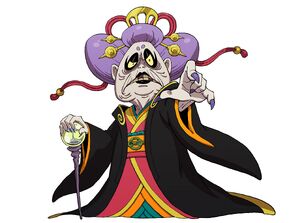 Retrieved from "https://villains.fandom.com/wiki/Dame_Dedtime?oldid=3464724"
Community content is available under CC-BY-SA unless otherwise noted.