To get rid of the royal family (Mostly succeeded)

To rule Gardania through her daughter, Delancy (failed)

Power Hungry villain
Dame Devin is the main antagonist of the 2011 animated film, Barbie: Princess Charm School. She is a subsitute teacher at the school who tries to live out her royal dreams through her daughter, Delancy, but she has evil plans to rule the kingdom, Gardania.

Dame Devin was a commoner who went to the Princess Charm School to be a lady royal after winning a lottery raffle. She held a grudge against Isabella for not picking her as a lady royal in her final year at the school. After the family was killed, Dame Devin lived in the palace with Delancy. She's a substitutue teacher at the Princess Charm School that tries to live out her dreams through her daughter and had evil plans for Gardania. Dame Devin was cruel to Blair when she first arrived due to her commoner status, since she was once a commoner herself.

Later on when she learned that Blair was the lost princess that survived the car crash, she intentionaly trapped her, Hadley and Isla in the palace basement in order to prevent them from interfering with her daughter's coronation by challenging the claims, but they escaped. However, Delancy put the crown on Blair's head and it revealed her as Princess Sophia. Dame Devin was enraged and yelled at her for ruining their future. She unknowingly and publicly revealed that she deliberately killed Queen Isabella and King Reginald in a car crash so Delancy could rule one day.

Everyone was shocked and Dame Devin tried to say otherwise. However, the royal judge ordered the guards to arrest her and she was removed (before vowing revenge), much to the shock of Delancy. 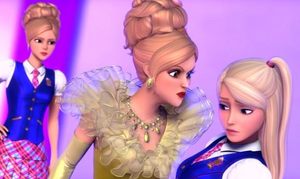 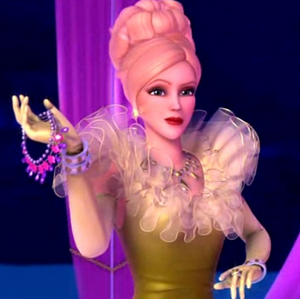 Dame Devin holding a necklace she put in Blair, Isla and Hadley's room to frame them. 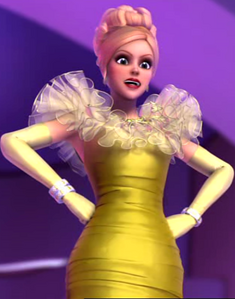 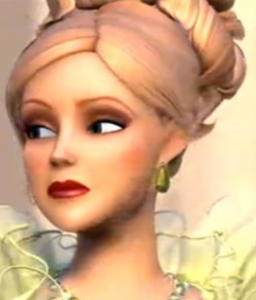 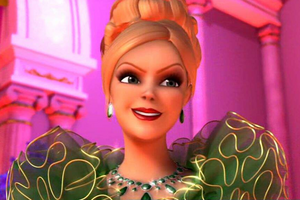 Retrieved from "https://villains.fandom.com/wiki/Dame_Devin?oldid=3888403"
Community content is available under CC-BY-SA unless otherwise noted.