Member of the Twilight Army

Help Ewan, AxeKnightmon, and Bagramon take over the Digital World and the Real World (failed)

Damemon is one of the major antagonists in Season 1 and 2 of Digimon Fusion. He is Laylamon’s former pet and Ewan’s partner of the Bagra Army. He is a Digimon who has a bad habit of criticizing others regardless of the person or situation. While a member of Twilight, Damemon is partnered to Tyutyumon.

Damemon is a Champion Level Digimon that resembles a mechanical version of Sukamon armed with tonfa. He acts a bit childish and clownish.

Unlike his alter-ego, Damemon, Tuwarmon is a taller version of Damemon. He has the same arms and hands as Damemon. The metal parts are separated to four robot-like wings on his back, and his feet are different, and he has an symbol shaped like the letter "X" on his chest.

Prior to the series, Damemon appeared before Ewan Amano and guided him to AxeKnightmon who gave the child his Fusion Loader and tricked him into aiding their scheme. Soon after, Damemon serves as AxeKnightmon's spy within the Bagra Army by playing the role of Laylamon's pet to occasionally sit in on meetings with Lord Bagra and the Head Officers, criticizing them constantly.

After the Bagra Army succeeded in conquering the Digital World, Tuwarmon (Damemon's alter-ego) is reassigned as Ewan's personal bodyguard while beginning to show concern for the boy to the point of telling the boy the truth behind AxeKnightmon's lie. Damemon then became Tuwarmon and absorbed the Sun Bagra Army to become Ruthless Tuwarmon Beast Mode. After being mortally injured and defeated by Shoutmon X7, Tuwarmon changes back to his alter-ego, Damemon, with Tyutyumon abandoning him for having second thoughts about AxeKnightmon and telling Ewan the truth of being manipulated, Damemon succumbs to his wounds and dies in Ewan’s arms.

Digimon Xros Wars: The Hunters who Lept Through Time

Though able to revived after the defeat of Bagramon, Damemon make the choice to return to life a year later once Yuu has become strong on his own. Since then, Damemon became Ewan's partner in the Digimon Hunts occurring in the city. 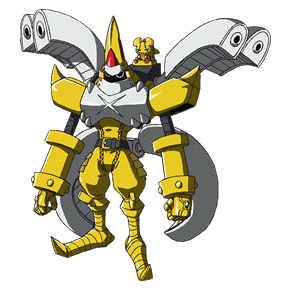 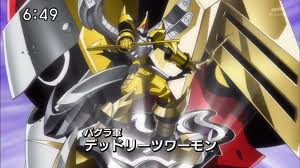