Be a great Pokémon Trainer.

Use Charmander to make himself look better than anyone (both failed).

Damian (in Japanese: ダイスケ, Daisuke) is a minor antagonist in the original Pokémon anime. He serves as the main antagonist of the episode "Charmander: The Stray Pokémon". He used to be Ash's Charizard's original trainer when it was a Charmander.

He was voiced by Hikaru Midorikawa in Japanese and by the late Maddie Blaustein & later Eli James in English.

Though Damian looks like a stylish guy, who boasts about collecting Pokémon, he's actually very arrogant, rude, sneaky, despicable, selfish and rather cruel. He is mostly interested in catching strong Pokémon, but expresses no legitimate interest in raising them himself. He abandoned his Charmander (simply because he thought he was too weak and pathetic) by leaving him on a rock and had no intention of going back to get it, and he didn't even care that Charmander would have died in the rain. In fact, he only returns for Charmander after seeing how powerful and useful he can be for him.

All and all, Damian's supreme ego and heartlessness is what ultimately causes Charmander to turn against him and give the arrogant & callous jerk the roasting comeuppance he deserves.

Damian owned a Charmander but he thought that it was too weak, so he abandoned him and left him on a rock and lying that he would eventually return for him. While Ash & his friends were at the Pokémon Center, Damian was bragging with his crew about how he abandoned his Charmander. Brock furiously confronts Damian and demands him to reclaim Charmander because he might die in the rain if his tail flame goes out. But Damien callously refused and attempted to battle Ash and his friends, but Nurse Joy intervenes, stating that using Pokémon to settle arguments is wrong. Angrily, Damian and his crew left.

Ash, Misty and Brock rush into the storm to save Charmander to find him being attacked by a flock of Spearow before Pikachu scares them away with his Thunder Shock. The gang then wrap Charmander in their raincoats and carry him back to the Pokémon Center. When they get there, they present Charmander to Nurse Joy. As Joy examines the weak Charmander, she is initially angry and asks they got Charmander into this condition until Ash explains that it was Damian who left the Charmander there, taking advantage of Charmander's loyalty. Brock pleads with Nurse Joy to save the Charmander, and she promises to do whatever she can. After an intense and distressing wait, Nurse Joy finally comes out of the operating room and reports that Charmander has pulled through, and he'll be fine by tomorrow. But as soon as Charmander recovered the next morning, he left to wait for Damian once again.

When Team Rocket creates a pitfall trap for Ash and friends and nabs Pikachu in a rubber bag, Charmander suddenly appears in front of them. He blasts the trio with his Flamethrower, and they flee in terror right past Damian, amazed at how much he underestimated Charmander's power. Ash and the gang thank Charmander for saving Pikachu and ask him to join them, but then Damian returns to take Charmander back, impressed by his power, and says that he didn't have to go through all the trouble raising Charmander himself, much to the gang's disgust. Damian then throws his Poke Ball at Charmander. Seeing the callous and uncaring jerk Damian truly is, Charmander smacks the Poke Ball back at Damian's face. Enraged, Damian attempted to attack the group with all his other Pokémon, but Charmander and Pikachu defeats him with a combination of Flamethrower and Thunder Shock. The singed Damian then runs away sobbing and scared, never to be seen again.

When Ash was Unova, he tells his friends about what happened when he first met Charmander. N makes it clear that he is utterly disgusted by what Damien did. 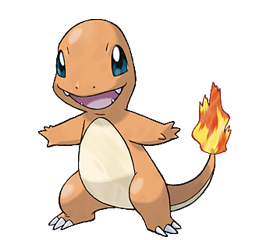