Damian Wayne of the Alternate Dimension is the twisted alternative version of the heroic main-universe Damian Wayne. He is the estranged son of Bruce Wayne, he appears as Nightwing in the present reality of Injustice: Gods Among Us, having accidentally killed Dick Grayson, the previous Nightwing, which caused his betrayal after he stopped being Batman's son, even Dick's girlfriend from Teen Titans Starfire developed a deep hatred towards Damian after his accidental murder but joining Superman's Regime in the worst part. Unlike the versions when he was Robin, this version is very dark and a lot more vindictive, despite having a bit of his counterpart's good side when he did cared about the late-Dick (now as the new Deadman after the original Deadman's spirit passed away and being the one who gave Damian his old Nightwing equipment as a birthday present), and Alfred (before the latter was killed by Zsasz prior the game's timeline retcons the comic timeline). He sides with Superman's One-Earth Regime in the parallel dimension, the man who responsible for sending Zsasz into killing Alfred to manipulate Damian as his pawn in the earlier 5 years later prior the retcon on the second game.

He later returned in Injustice 2, with Robin as his default outfit.

He is voiced by Neal McDonough in the first game, then by Scott Porter in the second game.

Damian first appears crashing into Joker's Asylum, quickly knocking out several Joker Clan goons. After the Clown Prince of Crime himself managed to defeat Hawkgirl, Damian tried to charge at the Joker but is repelled by the clown's razor sharp cards. Before the two fought, Joker notes him siding with Superman over Batman. To which Damian replied by calling his own father a criminal, just like the Joker. The two battle, but Damian ends up getting defeated by Joker. Before the Joker can get a chance to finish him off, the Insurgents arrive and Hawkgirl grabs Damian and retreats.

At Stryker's Island, when Batman's Insurgency is starting an attack to save the prime universe's Batman, Nightwing encounters Green Arrow. Green Arrow, thinking that this version of Nightwing is Dick Grayson, tried to reason with him until the parallel universe's Batman revealed that Nightwing is Damian Wayne, who killed Dick Grayson and took his identity. Batman states that he stopped being his son after that and that Dick Grayson was his true son. After defeating Nightwing, Batman said that he's "dead to him." After Superman's defeat at the hands of the prime universe's Superman, Nightwing, along with other Regime allies got arrested.

In his Classic Battle ending, after defeating Superman, Nightwing realizes that he is capable of anything and challenges anyone who gets in his path. Seeing his ability to inspire fear in others, Nightwing is chosen by a yellow power ring and is recruited into the Sinestro Corps.

Damian, as Robin is seen in the prequel chapter several years ago during the first game's prequel events. It will explain how he defects his father and joins Superman's Regime, and somehow retconning his killing on Alfred's murderer, Zsasz, with Alfred's dead remained unknown. In the prequel comic when Damian is freed and forced to return to Ra'as Al-Ghul's side instead of having his Regime friends freed along with it, Damian has a chance to resurrect Alfred to Lazarus Pit, while ambushing Batman's Insurgency, and ruining a wedding between Black Canary and alternate Green Arrow, including on kidnapping two of Black Vulcan's daughters and Connor Lance-Quinn (Black Canary and the original universe's late-Green Arrow's son) as hostages. As Harley Quinn in charge taking care of Connor, Vulcan's kid safely, Damian nurses a weakened revived Alfred. Despite Ra's threatening on Batman's Insurgency to surrender, Damian warns his grandfather that his father Batman will never give up no matter, and predicting the income of Insurgency's Justice League Task Force to Ra's hideout in South America, which became true as Batman implanted a nano tracking device on Connor, in case he is kidnapped like he is now. As Alfred began to recover, albeit still unable to talk for a moment in his recovery, Damian is having a heart to heart discussion with Animal Man on why someone who owned Batman a debt like Animal Man himself, even Vixen joins Ra's' faction. As Batman's Insurgence invaded Ra's' hideout successfully on bith rescuing the kidnapped children and bested both Suicide Squads members (safe for Katana) and the impostor Batman, Damian goes hiding, leaving Animal Man to take care of Alfred alone, predicting Batman will come to Alfred soon. Just as Batman arrived in time after knocking Animal Man out, Damian fights his father to prevent him from nearing Alfred and foolishly think his father will lock him again. As Damian let his father finish him off with no regrets, Alfred is both recovered and getting tired of watching the father and son fighting each other just as Batman's allies arrived and try to stop the two fighting each other, lecturing them to reconcile and never blame each other. Just as Ra's arrived and Batman failed to ceased Blue Beetle from firing the ceiling to enter the hideout, leading a battle between Ra's and Batman's side, Damian takes Afred to the safer place. When Blue Beetle accidentally kills El Diablo, causing an explosion on entire hideout with no one else being killed but only the animals are, Damian leave with his father, even though Alfred is now safe under protection of Batman's group.

Sometimes later, Damian cut his hair to short and paid a visit to his Regime ally, Black Adam on behalf of Ra’s proposal to co-operate. Despite Adam’s refusal, Damian understand Adam’s decision not to involve with Ra’s’ war for the sake of their Regime leader Superman. There, he first met Kara Zor-El, Supergirl and was unaware that she is Superman's biological cousin, despite Adam restrictedly warn Damian to stay away from her. Though being put in a comfined room by Adam, Damian has been visiting Kahndaq and knowing its environment for a long time since he joined the Regime 5 years ago. At night, he sneak into Supergirl’s room again just to train her powers. Shortly, he and Supergirl found the terrorists are threaten the hostage, and save them from the terrorists. On behalf of Kara not to kill the terrorists, Damian held back his killing intent and apprehended them, saving the hostages. Back at Kahndaq, Damian admit that his family are evil, but lied to Supergirl about Batman’s right reason to oppose Superman. As Adam witness the crime fighting Damian and Supergirl had done, Adam suggest Damian to stay in Kahndaq with them instead returning to Ra’s, and wants his help to rescue Wonder Woman from being imprisoned in Themyscira. Unaware to Damian nor Adam while both Regime members are worrying that the Amazonians will spill the truth about what the Regime had cause five years ago, they do not realize that one of the Amazonians are still loyalty to Diana and the Regime, meaning that Damian and Adam should not be worry about it.

When the news of the massacre on William City, Arizona reaches Damians ears, Damian suspect the massacre is actually Ra’s and Solovar’s doing through sending a robot killer Amazo on murdering innocent human civilians (including children and pregnant women) for their so-called “re-balance of the world”, leading him must head back to the League of Assassins, where they hid in Gorrila City. Damian manage to convince his fellow allies Vixen and Animal Man about the news for what Ra’s and Solovar did to the innocent civilians, then spills both later on what they are doing is wrong. As Ra’s and Solovar began completely massacre every innocent humans, after Gorilla Grodd’s failed attempt of his uprising, Damian, Vixen and Animal Man alerts their Regime allies of the League of Assassin’s recent movements. Damian soon devices a plan for a another coup, along with Animal Man and Vixen against Solovar and Ra’s. Damian do have agree about Ra’s vision about the cruelty of the world, but completely gone too far on wiping every innocent humanity, unlike Superman (although Damian himself was the one who sided with a child murderer who murdered Shazam in the first place). While devicing his plan alongside Animal Man and Vixen, they are spotted by the imposter Batman. However, it is revealed when Damian was forced to return the Assassins and spending time for Alfred’s revival, Damian figured out that the imposter Batman is actually none other than the revived Jason Todd. Damian try to convince Jason that they are completely sided with a wrong side like Ra’s and Solovar, and Damian still believe in Jason’s old vow not to hurt innocent humanity. Once Jason has finally been convinced, they rescue Professor Ivo, who was forced to work for Ra’s in control of Amazo while his children being held hostage, but was too late to realize that Ivo’s children was murdered for Ra’s’ cause. At a same time when the heroes of two factions are unable to stop Amazo, Damian told Kara that it is her time to join the fight and end Amazo once and for all. Although Amazo is defeated when Damian and his allies tried to escape from Ra’s, Damian got knocked out and caught again, and Animal Man is also killed. However, Vixen and Jason manage to escape and began to warning the Regime and Insurgency of Damian’s captures. Thankfully, his mother Talia began realize how right Damian is, just as his sister Anthanasia fell for Ra’s betrayal, and releases both siblings then escape to Wayne Manor where Alfred and a redeemed Selina are.

In Batman's prequel chapter part when Damian was Robin, he is first seen aiding his father to find Superman in Cellblock C of Arkham Asylum, but later defects him as Robin kills Zsasz and accuse his father for letting Jason Todd, and Superman's family Lois and their unborn son died by someone dangerous as Joker's hand, and Damian claim that he himself was raised League of Assassins as an assassin, different than his father's ideal of without killing on fighting crimes.

In a recent chapter's present time in many days after Ra'as Al-Ghul's own Regime ends, at cost of Talia’s death, Damian is shown to have been return to his cell as a mean to wait for other Regime remnants to rescue him and his imprisoned Regime allies. He was later freed by the remaining escaped Regime members Black Adam and Wonder Woman (assisted by a newly recruit Supergirl), along with Cyborg during Brainiac and Society's reign, until Batman stops the conflict and made an uneasy alliance with the Regime to stop Brainiac and the Society, thus freeing Superman. He is last seen beaten by Supergirl when she is about leave in broken heart after learning how the Regime heroes have fallen 5 years ago, but must deal with Brainiac before the arguing start again first.

After his father Batman sacrifices himself to protect Damian allowing him to deliver the final blow to Brainiac. Now with an appreciation of what their family's symbol truly means, Damian decides to carry on his father's legacy as the new Batman.

If the Bad Ending alternative occurs the event of Injustice and the Masters of the Universe, Damian and Cyborg began to redeem himself like how Shazam, Flash and Hal, including Aquaman did, with Damian becoming the new Batman. He summons He-Man and his allies to Injustice Universe, due to He-Man’s nemesis Skeletor allied with Superman. 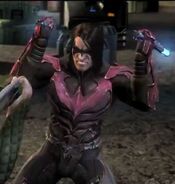 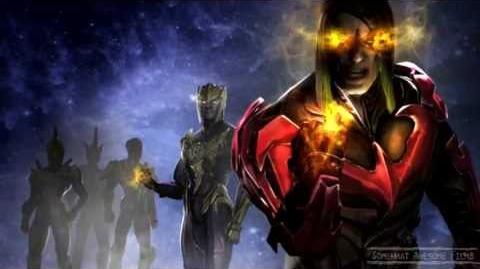 Retrieved from "https://villains.fandom.com/wiki/Damian_Wayne_(Injustice)?oldid=2800219"
Community content is available under CC-BY-SA unless otherwise noted.