Mr. Thorn
Son of Darkness
Son of Satan
Messiah of Death
Son of the Devil
Prince of Darkness

Take over the world and revert it to Satanism (ultimately failed).

Damien Thorn is the main antagonist of The Omen trilogy. He is the son of the Devil and the Biblical Antichrist who is destined to bring on the apocalypse, in the first movie Damien was a child and was just beginning to utilize his apocalyptic powers against the world but as he grew older his influence expanded until his climactic battle with the Second Coming of Christ during the events of Omen III.

He was portrayed by Harvey Spencer Stevens in the first film, Jonathan Scott-Taylor in the second film (who also played Ronnie Winslow in The Winslow Boy), Sam Neil (who also portrayed Charles Bromley in Daybreakers, Dr. William Weir in Event Horizon, and Mr. McGregor in the Peter Rabbit film) in the third film, and Seamus Davey-Fitzpatrick in the remake.

In the original film, Damien was born of Satan and a jackal in Rome at 6:00 AM on June 6, 1971 - which is linked to the number 666, the traditional sign of the Devil, and the number 666 also appears on Damien's body as a birthmark.

Damien was adopted by Robert Thorn, the American Ambassador to Britain after his child died in what he assumed was a stillbirth, a fact he hid from his wife and together they raised him as their son - things started fine until Damien reached 5 years old, at which point the Devil arrived during his birthday celebrations in the form of a dog and hypnotizes Damien's nanny into hanging herself in front of the crowd while declaring it was all for Damien.

Soon after Robert is approached by Father Brennan, who tries to warn him of Damien's true-power but fails and Robert remains unconvinced, Father Brennan would meet a grisly end for his stand against the Antichrist however when he was impaled by a church spire that was knocked down by lightning presumably summoned by Satan himself - around this time a demonic woman by the name of Mrs. Baylock manages to obtain the position of Damien's new nanny and secretly becomes the budding Antichrist's guardian.

Damien's behavior becomes more unnatural as time progresses and his mother Katherine ultimately loses her next unborn child when Damien knocks her off a balcony using a tricycle and Robert finally begins to question the origins of his "son", with some added help from a photographer named Keith Jennings.

Together Robert and Keith seek out the hospital where Damien was born to find his birth-mother and get answers - only to discover the hospital burned down in a horrible accident, killing several people and all of the records - however they learn of one of the survivors, the head priest at the hospital, and locate him - finding him gravely ill but alive and he tells them where to find Damien's mother, who turned out to have been buried at an ancient and abandoned Etruscan graveyard.

Robert and Keith head to this graveyard and find the woman's grave next to the grave of Robert's true son - when they remove the cover of Damien's mother's grave they find a jackal's corpse in place of a human's, confirming Damien was not of the natural world. Keith understandably becomes alarmed and wanted to leave but Robert wanted to uncover the grave of his son in the hope it would contain a similar corpse and give him some hope that his son could be alive - to his horror, this isn't the case and the grave holds the remains of a human child - the skull having a wound showing it was murdered at birth.

At this point, the Devil is tired of the two men snooping as a pack of dogs suddenly sets upon them and drove them from the graveyard.

During these terrible events, Katherine is thrown out of the hospital window by Mrs. Baylock to her death - devastating Robert when he finds out. later he and Keith journeyed to Israel to find a man named Bugenhagen, an archaeologist who knew how to stop the Antichrist.

Robert learned that he had to stab Damien with the seven daggers of Megiddo to end the Antichrist's power but Robert was repelled by the thought of killing a child and threw the daggers away, Keith ran after them only to meet his fate as he was decapitated by a pane of glass from a run-away truck - this death prompts Robert to return to London with the daggers, intending to kill Damien and put an end to the carnage.

Returning home, Robert finds Mrs. Baylock's guard dog awaiting him but he manages to lock it in the cellar and then goes upstairs to check whether Damien has the "666" birthmark of the Antichrist when Damien is revealed to indeed have the birthmark Robert knows what he must do.

However, Mrs. Baylock attacked him on Damien's behalf but was fought off, ultimately being killed when Robert stabbed her during their violent struggle - after this, he dragged Damien to a church with the intent of killing the Antichrist on the altar.

Robert arrived at the church and laid Damien on the altar, reaching for the daggers and prepared to kill Damien but is shot dead by police who arrive on the scene, and thus Damien's life was spared. The movie ends with Robert's and Katherine's double funeral, where Damien is seen holding the hand of the U.S. President, their backs facing the camera. Suddenly, Damien turned completely around, and looked straight at the audience and gave a sinister smile - knowing his reign on earth had just begun.

In the second film Damien has returned and lives with his uncle Richard and his wife Ann and Damien is enrolled in Davidson Miltary Academy.

He has been chosen to succeed his uncle in his business, but a Satanist in the business desires Damien to kill his cousin Mark and start his reign of terror. Damien accidentally shows off his powers in military school by reciting all of a historical battle's events as if he had been present. This shocks the teacher until the Satanist approaches him after class warning him to keep a low profile because now is not the time for the world to know who he is. Confused, Damien asks him who he is, to which he is told to read Revelations because it speaks of the near future and Damien's role in it. Shocked at finding out he is the Antichrist, Damien initially rejects his powers out of fear. However, after careful thought, Damien begins plotting to conquer.

During a school trip to Thorn Industries, Damien and the other students are infected by loose gases. However, when the doctor examines Damien's skeleton for damage, he finds to his shock Damien's internal system is that of a jackal. Horrified, he attempts to alert the authorities but the Devil kills the doctor by malfunctioning an elevator he was riding.

From here, Damien only grows in power. Knowing he is protected by the Devil, he kills his own cousin Mark after a horrified Mark threatened to reveal Damien's secret. However, Damien only reluctantly kills Mark as he truly cares about his cousin and wanted Mark to accept him. Richard is devastated but retrieves the Daggers of Megiddo. He attempts to kill Damien at a museum, but his wife betrays him, revealing she was also a Satanist and kills Richard. She then yells for Damien, who nonchalantly sets the museum on fire, burning her to death, as Damien calmly walks out into the night and is rescued by police.

In the third and final film, Damien had grown into a powerful politician, and revered cult leader who commanded a crowd of fanatically devoted, Satanic 'Apostles' known as the Disciples of the Watch, who sought to take over the world - going as far as committing a modern-day Massacre Of The Innocents when he became aware of the coming of the Messiah. He also uses his Hellhound to manipulate Barbara Dean into killing her husband, Harvey, and her son with a hot iron.

Later in the film, he rapes journalist Kate Reynolds, whom he had become romantically involved with and manipulates her son Peter into being his disciple, but later uses him as a human shield against Father De Carlo when he tries to stab him, resulting in his death. However he was unable to stop destiny and ultimately died in the climax of this movie: having been stabbed by three mystical daggers by Kate and laying by the image of what is presumably Jesus - defiant to the end Damien looked upon the face of the Messiah and uttered "you have won... nothing" before collapsing, the death of Damien was symbolic of a fresh beginning and as the film ends it is heavily implied that the Second Coming has occurred: sealing Damien's fate forever. In other words, he will never hurt or manipulate anyone ever again.

Although Damien Thorn died in the Omen III he was succeeded by a daughter of his who became the antagonist of the less popular Omen IV and joining her younger twin brother who is the other child of Damien himself.

In 2006 Damien Thorn was introduced to a new generation of viewers in a remake of the original film - this remake sought to bring The Omen to a new audience and was also likely designed to play on a one-time marketing device due to the date 06.06.06 - which makes up the numbers "666", Damien's birthmark and the traditional symbol of the Beast.

Due to his unholy heritage and his destiny as the Antichrist, Damien possessed several harmful and unholy abilities and weaknesses. He could cause machinery to break down and/or stop working and could cause people to see horrific visions and develop aneurysms. He also knew vast information about virtually every known historical event.

It was also shown that Damien was seemingly immune to all major and minor mortal ailments (from colds and chickenpox to chemical poisoning) and that the Seven Daggers of Megiddo are the only weapons that could harm him, and even then Damien had to be killed with all seven of the daggers on a church altar to destroy his body and incapacitate his soul. He could cause people to see others as someone else, and could also control animals such as dogs and horses.

Because of his Satanic status and lineage, Damien deeply feared churches as a child and felt discomfort and pain when the second Star of Bethlehem formed during the Second Coming of Christ. 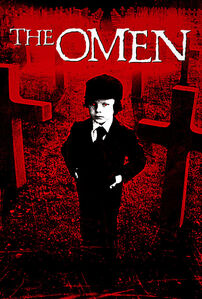 Damien on a poster of The Omen. 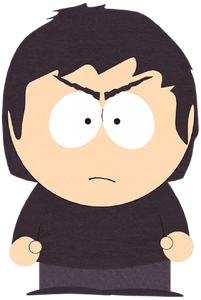 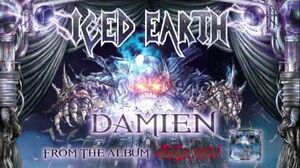