Aid Lord Profion in his diabolical quest for power.

Breaking the undead curse that plagued him due to possession by Profion's tentacled demon with the Orb of Falazure.
Awaken the Dragon God of Death and Decay Faluzure.
Avenging his demise and Profion's downfall by destroying all of the magical kingdom of Izmir.

He was portrayed by Bruce Payne, who also played Charles Rane in Passenger 57.

Damodar is an evil sorcerer and the personal henchman to Mage Profion, who resides in the Empire of Izmir. When Profion sends Damodar to find clues to the whereabouts of a magical sceptre known as the Rod of Savrille (that allows its user to control red dragons), Damodar confronts a library wizard and interrogates him. The wizard, unwilling to tell him, sends a map that reveals the location of the sceptre to a young Mage named Marina that busted Snails and Ridley, prompting Damodar to kill him. As Marina succesfully escapes with two thieves named Ridley and Snails, and they possesses the map, Damodar frames her and her companion for the wizard's death to ensure that the authorities will not cooperate with them. Before he did so, however, Profion punishes Damodar for his failure by inserting a tentacled monster into his head.

Damodar and his men pursue Ridley and his companions in an attempt to take the map from them at the bar, but they manage to escape just in time. Later on, after Ridley obtains a relic called the Eye of the Dragon that will open the door to the tomb where the Rod of Saville rests, Damodar confronts them, and succesfully kidnaps Marina during the ensued chaos. He interrogates her, even with pleads as he revealed her that Profion have him cursed with tentacle monster inside his body (reveals discoloration of his ear and some part of his skin). Despite his pleads, she refuses to talk anyway.

Infuriated, he torments her with tentacle from the monster inside his head due to Profion's magic, in which he is eventually able to find out what she knows. Ridley and Snails, convinced by elves that work for Norda, travel to the castle where Marina is being held and Snails takes the map back from Damodar's room. Damodar caught him stealing the map, and chases Snails to the roof of the castle. He then has Snails hostage in front of his friends after subduing and cornering him, demanding to them to offer the Eye of the Dragon. However, Snails sacrifices himself by throwing the map to Ridley, which prompts Damodar to kill him and hurl Snails' body off the castle. Enraged by the death of his friend, Ridley attacks Damodar but he stabs him with his own sword. Before Damodar can finish him off, Marina uses magic powder to create a portal through which she and the wounded Ridley disappear.

After Ridley takes the Rod of Saville from the tomb, Damodar and his guards reappear, capture his companions and promises to free them in exchange for the Rod. Ridley, albeit hesitant, gives the Rod to Damodar. But Damodar, orders his men to kill them anyway before leaving, though he also had them to kill Ridley first. The group manages to break free from the guards and they travel to Sumdall, the capital city of Izmir, where Damodar finally hands the Rod to Profion. Damodar demand Profion to free him, and Profion remove the tentacled monster from Damodar's head, but not did the same with his immortal curse.

As Damodar and Profion climb to the top of a high tower to battle Empress Savina with an army of red dragons, Ridley confronts them and fights Damodar once more. This time, Ridley succeeds in beating his opponent by stabbing him with his sword, before throwing Damodar over the edge of the tower to his death, finally avenging Snails.

Damodar later revealed to survive his fall, and discovered that the presence of the creature Profion implanted into his body has caused him to walk the earth as an undead shadow of his former self. Driven insane by the curse, he seeks revenge against the kingdom of Izmir, and the descendants of those who defeated him.

After years of searching with the aid of two dark talon lizardfolk shamans, he locates the Orb of Faluzure, an ancient artifact linked to the power of dragon god of death and decay Faluzure himself who imprisoned under Saragasso's mountains. Breaking the curse that has plagued him for so long with the Orb's power, he prepares to awaken the dragon God to destroy Izmir, that has long changed since revolution done by Empress Savina.

The Orb's removed caused a disturbance that aroused the attention of Berek, the veteran fighter and minister of the House of Lords of Izmir, and his love Melora the Mage, who then investigate reports of poison gas emanating from Saragasso's caves and find the still-slumbering dragon. Fascinated by her beauty while realizing the scope of the threat she pose on his plans (as he caught her attempting to reassemble the Librum of Turam which holds the key to stop Falazure) Damodar magically spirited away some strands of her hair and used them as a medium to subject her with a curse that slowly turning her into a corrupted undead. Afterwards, he revealed himself to Oberon and Mage Councils when they attempted to track the missing Orb with discern-location spell.

As he awaits for the day Falazure regaining enough strength to break out of his prison, Damodar is approached by a lich lord Klaxx the Maligned who offers his services to Damodar. Klaxx also revealed that Berek and his companions, Lux the Barbarian, Nim the Rogue, Dorian the Cleric of Obad-Hai, and Ormaline the elf Wizard; are on their way for the goblins of Kurtl in order to find the Pool of Sight within Malek's Vault. Undaunted, Damodar reassured that he's unstoppable as long as he as the Orb.

However, Damodar's arrogance leads to a brief setback where Berek exploited it in a brief confrontation in which he and his companions teleported their way into the throne room of his lair and seemingly recklessly attacked him head on: Once Damodar lowers his guard with aid of Nim and Ormaline, Berek cuts the dark mage's hand off to steal the Orb within his grasp before he and his comrades teleported away to the Temple of Obad-Hai so Nim and Ormaline receive proper treatments on their injuries. Outraged, Damodar scattered his demons to retrieve the Orb as his lizardfolk shaman treating his wounds.

Fortunately for Damodar, Klaxx, who had assassinated Oberon in order to infiltrate Izmir, retrieved the Orb for the dark mage just as Falazure is about to fully awakens. With the Orb of Falazure returned to his hands, Damodar summoned the dragon god from his mountain prison before uneasily offered him his servitude in return of seeing the destruction of Izmir. Destroying the orb that handicapped his powers, Falazure accepted Damodar's proposal under the condition where he sacrifices 100 people every new moon in honor of his release.

As Falazure begins his rampage, Berek and Melora discovered that the original Orb of Falazure was created from Turanians's prayers for Obad-Hai, and that she had to prove her worth to the deity of nature to gain another. With a new Orb in her possession, Melora rallied her surviving fellow mages to combat the dragon god while Berek set out for Damodar both to cure her and ensuring her success. Knowing that the tide has turned against him, coupled with Klaxx denounced his service and left, Damodar attempted to leave the scene only to be intercepted by the vengeful Lux who sought to avenge her comrades. Fortunately, Berek managed to calm Lux down and the two proceed to coerce Damodar to break the curse she put on Melora. Reluctantly giving in to their demands, Damodar reluctantly lifted the curse, but reassured Berek that he is currently delaying the worst. With maladies Damodar put on her completely undone, Melora swiftly turned the tide of her fight against Falazure and imprisoned him deep within a lake not far from his original prison.

Damodar is last seen imprisoned in a dark dungeon beneath Izmir, but smiling to himself as if he is fully prepared to wait another hundred years to have his revenge. 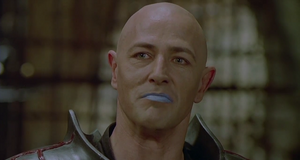 Damodar's pleased grin upon his master's success with his experimental Dragon Rod. 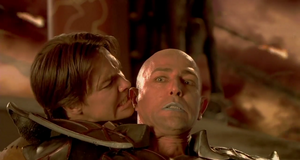 Damodar is stabbed through the back before being thrown from a tower for his first death. 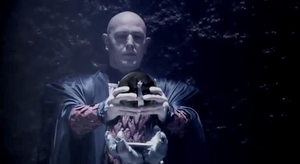 Damodar acquiring the Orb of Falazure. 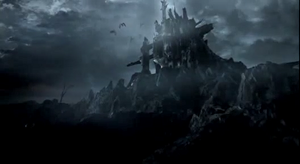 Damodar's dark castle in Dungeons and Dragons: Wrath of the Dragon God. 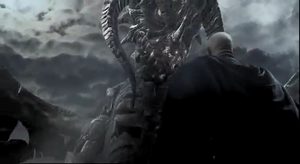 Damodar and the awakened Falazure. 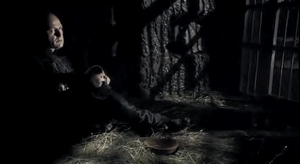 Damodar imprisoned.
Add a photo to this gallery
Retrieved from "https://villains.fandom.com/wiki/Damodar?oldid=3840215"
Community content is available under CC-BY-SA unless otherwise noted.