Get Joe Darke guilty by any means necessary.

Kill Bruce Goodman in order to hide the secret of Darke's conviction.
Kill Neil Marshall to frame Darke for the murder (all succeeded).
Get a guilty verdict for other criminals by any means necessary (mostly succeeded).
Avoid prison (failed).

Damon Gant was the the District Chief of the Los Angeles district police department. He, along with his partner, the chief prosecutor Lana Skye, formed a legendary duo for their formidable services of law enforcement. Gant was the brains of the duo, famous for his crime-solving abilities.

The last case of the legendary duo was the SL-9 case in which a businessman named Joe Darke committed a string of murders. Along with the investigation team, which included detectives Bruce Goodman, Jake Marshall and Angel Starr as well as Jake's brother, prosecutor Neil Marshall, tried to gather enough evidence to convict Darke, but didn't make it. During Darke's interrogation, a power outage occurred, which Darke used as his advantage to flee the interrogation room. Neil chased him to Gant's office where they had a fight. Gant followed Neil and after arriving at his office he saw Neil, Darke and Lana's sister Ema, unconscious from the fight. Gant saw this as an opportunity to convict Darke once and for all, so he impaled Neil's unconscious body on the sword of a suit of armor, killing him.

Gant arranged the crime scene to make it look like Ema was the murderer. When Lana arrived, she and Gant rearranged the scene to make it look like Darke was the culprit. Later, using false evidence, the duo along with prosecutor Miles Edgeworth managed to sentence Darke to death for his crimes. Gant then fired Angel Starr and demoted Jake to patrolman level in order to ensure that the investigation team stayed quiet about the case. For the next following years, Gant blackmailed Lana to keep control of the city's law enforcement since she wanted to protect her sister.

Shortly before the SL-9 incident was transferred into storage for good, Bruce Goodman, convinced by Jake Marshall, decided to reopen the case. In a moment of panic, Gant killed Goodman with Darke's knife. He then cleaned up the crime scene and with the help of Lana moved the body to the underground parking lot. With false evidence, Gant then managed to frame Lana for the murder.

Phoenix Wright managed to break into Gant's office later on and found decisive evidence from his safe which would imply that Ema was the one who murdered prosecutor Marshall two years earlier. Not refusing his defeat, Wright pleaded the court to summon Gant to the witness stand. Along with his and Lana's testimony, Wright created a clever plan to prove that Gant was the murderer. After Gant admitted that he had cut a piece of cloth from prosecutor Marshall's vest, Wright noted that since there were no blood in the piece of cloth, that would prove his guilt once and for all.

After Gant's breakdown, he admits to the crime and actually expresses sad self-reflection over his actions, regret over losing The Judge's friendship, and good wishes for Phoenix's and Edgeworth's futures.

In his breakdown, Gant starts clapping his hands and laughs hysterically, increasing the amount of clapping more and more until returning to his former, calm self.

Gant mostly seemed like a very jovial, coltish, eccentric person, but was nevertheless the respected leader of the police force. He also called other people with his own nicknames, such as "Wrighto" for Wright, "Worthy" for Edgeworth, and "Udgey" for the judge. He also had a passion for swimming and would constantly invite people to swim with him.

However, this all changed during the SL-9 case. Gant, frustrated, and angered about being unable to prove Darke guilty, decided to take matters into his own hands. The chief of the police force thus became a cold, knavish, calculating, manipulative criminal himself using his once-jovial nature as a mere façade.

Damon was very intelligent and cunning, having an extensive knowledge of the criminal system, effortlessly manipulating both the prosecutor's office and the court to turn the tables against his opponents. His understanding of the legal system allows him to dismiss arguments and evidence, penalise and intimidate Phoenix Wright and manipulate outcomes to suit his desires.

Despite how far he has fallen by the time of his conviction, he seems to show genuine remorse for what he has become, lamenting the fact that the Judge has lost all respect for him, before congratulating Phoenix Wright and Miles Edgeworth for catching him. He then accepts his conviction, leaving Edgeworth with (cynical) advice and warnings, finishing his speech by alluding that the two men aren't too different. 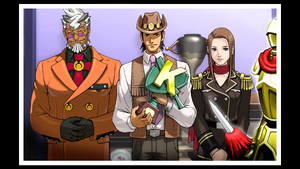 Damon Gant before he turned evil

Damon Gant and Lana Skye together