Archenemy of the Dover Boys

Raging about the Dover Boys.

Defeat the Dover Boys (both failed).

Dan Backslide is the main antagonist of the 1942 Merrie Melodies cartoon The Dover Boys. He is a parody of Dan Baxter from the Rover Boys book series.

Dan makes his appearance in this cartoon by kidnapping Dora Standpipe while playing hide and seek with the Dover Boys, and then proceeding to take her to his mountain lodge. She proved to be quite the fighter, however, and she managed to beat him to a near pulp, all while yelling out for help. When the Dover Boys arrived to save Dora, they proceeded to beat up Backslide, and then themselves, after Backslide had cleverly collapsed to the floor. All of it ends with Dora leaving him, Tom, Dick and Larry for the strange old bath suit wearing man, then both of them jumping into the sunset. 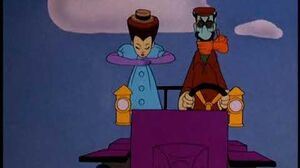