Owner of the Freak Show (short-lived)

Using his wealth to bribe the authorities

Take over the Freak Show.

Daniel "Dandy" Mott is the main antagonist of American Horror Story: Freak Show. He has a unique role in the show as he slowly develops into a serial killer.

He was portrayed by Finn Wittrock, who also portrayed Harvey Morell in Criminal Minds and Cameron Tyler in Law & Order: Special Victims Unit.

Dandy was physically beautiful, but as the Freaks themselves eventually realized, this was in no way reflected by his personality, and metaphorically, he was the most rotten apple of his family tree. He is an utterly psychopathic man child, has an absolute lack of conscience, is easily bored, fearless, and prone to emotional outbursts of rage. Other than that, he is a completely emotionless, remorseless and devoid of all empathy for others. He is charismatic and considers himself to be the embodiment of perfection and a living god. He was emotionally and psychologically disturbed, along with being a scion who finds passion in violence. After having every whim catered by his mother (though eventually, Dandy decided that he needn't of her anymore), Dandy became a spoiled man-child. Despite being an adult, he enjoyed children's toys and playing dress-up, along with having a room full of stuffed animals.

Because he felt and thinks that the world revolves around him, he reacted negatively when his desires were not met, He tended toward raging malevolent tantrums, along with threatening and harming others including animals. He would still pretend in his luxurious recreation room and despite there being only two apples left in his family tree (including himself), he had no aspirations to fall in love and start a family as he considered the women presented to him as "smelly cows" and babies as "boring", though he grew interested in having a family when he met Bette and Dot.

Despite claiming that he loves the twins, it is indicated that his "love" for them is nothing more than an obsession. Dandy also eventually made it clear that he did not truly love them, as he would not have killed their family otherwise. In his youth, he took pleasure in killing small animals and presumably played a role in another boy’s disappearance, which was a tell-tale sign of his psychopathy, along with the numerous murders he would later commit in his adult life. His psychopathic traits were often stimulated by boredom and malice, as a result of him feeling like he had nothing else left to achieve.

He considered himself superior to others in his community and fancied himself a living "God," above the law and above society in general. He used his family's status and wealth to manipulate the authorities so they would look away from his atrocious behavior and vile actions (though his therapist himself warned Gloria that it would be in her best interest to take action after noticing signs of Dandy's insanity in the sessions), showing that he was crafty and emotionally manipulative.

During his therapy session, Dandy admitted that he considered having an interest of bathing in people’s blood, which he began doing after killing his mother. He also entertained the idea of cannibalism, though he didn’t end up eating any of his victims.

He proved himself to be a much worse owner than Elsa, as unlike Elsa herself, he did not care about the freaks at all. Additionally, he made Ima Wiggles feel uncomfortable around him by playing "Here comes the airplane". And while he didn’t go through with it, he proposed the idea of mutilating the freaks to make them more exciting, which was a contributing factor to them leaving employment.

Unfortunately for him, he was proven wrong about the world revolving around him when the Freaks worked together to bring him down, including the Tattler Twins, who he assumed he could emotionally manipulate (as with the case with his mother), but was proven wrong.

Dandy is Gloria Mott's only child and was spoiled throughout his entire life. He lived in a mansion with his mother and their maid, Dora, who grew up with her daughter, Regina. While Gloria loved Dandy and gave him everything he wanted, she also raised him the way her own parents raised her, and thus became an absentee mother who was never there when he needed her most. Dandy is a descendant of wealthy Edward Philippe Mott, who while not evil was described as a “mentally disturbed introvert”. Due to genetic disorders, it became apparent that madness always ran in the Mott family, as he was especially known to be a rather mentally troubled child even before becoming a serial killer, since he killed the family pet and implicatively murdered the gardener's child. The family line ended when Dandy Mott died in Florida in early 1953.

Dandy at first murders several animals to appease his boredom, but befriending a mentally insane clown (Twisty the Clown) allows him to work up to torturing people. Twisty's captives escaping (freed by Jimmy Darling) "ruins his Halloween", after grabbing and wearing Twisty the Clown's mask, this finally provokes him into murdering Dora. His mother immediately catches on as she finds her the next day in the same spot. She helps him hide her corpse in the garden. Dandy attempts murder again as he stabs and mutilates a male prostitute, but is easily horrified at the fact that he was still alive after most of his disposing of evidence was finished.

The only person (or rather, persons) that Dandy is attached to are siamese twins, Bette and Dot Tattler. While Bette adored Dandy, Dot could see that he was not well in the head and had wrote down disrespectful thoughts of him in her diary. Dandy has a mental breakdown when he reads Dot's diary and they leave him to return to the freakshow. Gloria then tries to get him help and send him to therapy, as Regina, the daughter of Dora (whom was Dandy's first murder victim),

Regina begins to grow suspicious when she realizes that Dora has disappeared and threatens to go to the police. Dandy tells his mother that he will continue the therapy sessions if she kills Regina, which she doesn't. Dandy confronts his mother of her origins with his child molesting father, who was also the cousin of his mother. From seeing his mother depressed, he holds a gun to his own head to try and kill himself to help his mother, but she says that she wouldn't be able to live if he had done so. He then murders his mother and proceeds to bathe in her blood.

Dandy proceeds to kill a door-to-door saleswoman, and ties her severed head to his deceased mother to re-enact the two as a puppet representing Bette and Dot. Out of fear for his mother not being able to cover up his murder, he goes to see fortune teller, Maggie Esmerelda. Having satisfied with his fortune, he pays her 100 dollars. Dandy encounters a drunken Jimmy, talking about how he recalls Dandy as the second clown who had assisted Twisty with his murders. Dandy then taunts Jimmy by saying that he is his God, and that he will destroy him and everything he loves.

Dandy allegedly follows Jimmy to the Tupperware womens party, and after he leaves, Dandy approaches and knocks on the door saying his car is broken down. Dandy is then let inside to use their phone, and while unseen, later on, all the women in the household are later found violently murdered in a large pool of blood. Regina later confronts Dandy about her going to the police, and Dandy delightfully confesses everything to her, then willingly invites her into his bath of blood, to which she protests. Dandy allows her to leave, while screaming out loud that he is a God. Regina brings a policeman, Det. Jack Colquitt, to Dandy's house. Dandy confesses to Det. Colquitt as well, just before offering him one million dollars to kill and bury Regina, to which he accepts immediately by shooting her in the head. After this, Dandy truly is "above the law."

He reappears working with the detective to manipulate Chester Creb, a new addition to the freak show. He does a psychological background and learns that he murdered his wife and her lover under the influence of his puppet/alternate personality, Marjorie. He steals Marjorie, and convinces Chester that she ran away and was going to tell the law about his murders. He tells Chester that she is in the big tent in the Freak Show, where "Marjorie" tells him to saw Bette & Dot in half.

Dandy appears once again to Bette and Dot some time afterwards. He attempts to warn them about Chester's mental illness, but they ignore his warning. This lead to the twins living and Maggie Esmerelda dying in their place instead. Before escaping the wrath of her defected employees, Elsa Mars sells the Freak Show to Dandy. Dandy arrives at the Freak Show later as the new owner. He proclaims that his dream has come true.

However, Dandy proved himself to be an even worse owner than Elsa. The freaks, having had enough of his abuse, stand up to him with Paul insulting him before announcing that they are all quitting. The next day, Dandy shoots Paul in the head with a gun and then kills Penny, Toulouse, Legless Suzi, Barbara and Amazon Eve while making his rounds, leaving only three freaks remaining alive (Desiree, The Tatler sisters and Jimmy). Bette and Dot agree to marry him and while at the dinner table, he begins to feel woozy after drinking some champagne. It's then revealed that Bette and Dot (along with Jimmy and Desiree) had been setting him up the entire time in order to avenge their fallen brothers and sisters. At the freak show, they chain Dandy up inside of a Harry Houdini escape box and turn on a water hose, telling him that, regardless of how handsome he is, he is an even bigger freak than them. They eat popcorn and watch in amusement as Dandy drowns inside of the box. 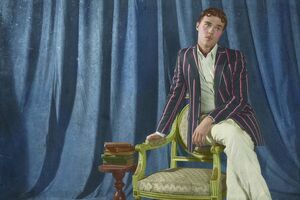 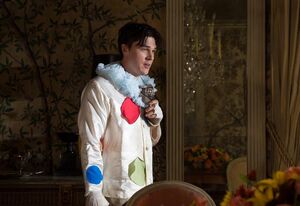 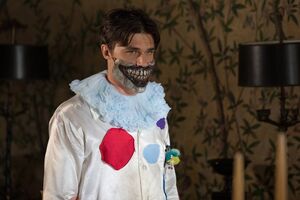 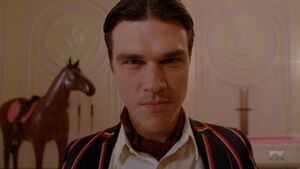 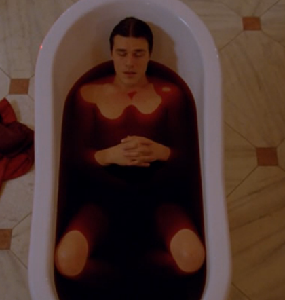 Dandy bathing in his mother's blood. 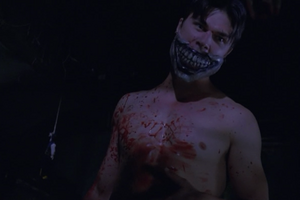 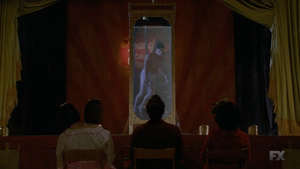