Prick in a suit

Director of Special Projects for the Ultor Corporation

Later Chairman of the Board of Directors

Getting Stilwater gangs in Ultor's pocket.

Dane Vogel is the Director of Special Projects (and later Chairman of the Board of Directors) of the Ultor Corporation, and served as the main antagonist of Saints Row 2.

In Saints Row: Gat out of Hell, Vogel returns as a main character and ally to the two player characters Johnny Gat and Kinzie Kensington.

He is voiced by Jay Mohr.

Vogel appeared as a Director of Special Projects of the Ultor Corporation, he was a wealthy, powerful, and influential man who enjoyed the luxury of being one of the most prominent and iconic figures in Stilwater. He had nothing but contempt for gangbangers, homeless bums, and other undesirables of Stilwater society. In his mind, Vogel truly believed that he was doing Stilwater a favor by burying the city's poverty and crime beneath a glass and steel utopia.

On the outside, Dane Vogel was a Stilwater celebrity, ladies loved him for his looks and men applauded him for bringing order and peace to the city. His actions had gained him a great deal of respect and admiration among his peers during the period when the Protagonist lay in a coma at the Stilwater Penitentiary.

This deal is ultimately broken at when Shogo's father, and the Ronin's true leader, Kazuo Akuji, demands a more substantial tribute from Vogel for continued protection. Vogel refuses to comply with the demand, so in response, Kazuo severs all ties between Ultor and the Ronin, much to Shogo's disbelief.

To accomplish this feat, he secretly manipulates the Protagonist into massacring every member of the board during an annual corporate party aboard one of their private yachts. After receiving his promotion to chairman from the corporate office, Vogel celebrates by calling a press conference to outline his ambitions for "The Revitalization of Shivington."

During this conference, Vogel tries pleading with the Protagonist, claiming to be the Saints' "number one fan," only to be shot in the mouth in mid-speech, sending him crashing through one of his top story office windows.

In the aftermath, Eric Gryphon is appointed as Vogel's successor, and he befriends the Saints following the events of Corporate Warfare. This opens up as to how the Saints become major celebrities in Saints Row: The Third. At this point, they have entered into a partnership with Ultor known as the Saints/Ultor Media Group

Throughout the game, Vogel takes on the role of a guide, giving hints, quests, and challenges.

Vogel also uses Tacos Malos as a front, through which the "Last Supper" weapon is unlocked.

Centuries later, in the Shawarma cutscene which unlocks after completing City Takeover, Kiki is kidnapped by William Sharp and Vogel risks his own life to save her. He succeeds and the two of them decide to get married with "ironclad prenups," and force Sharp to be their waiter. 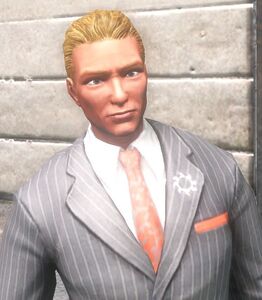 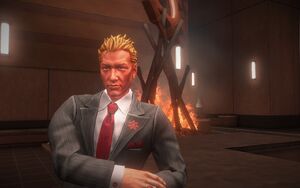 Vogel in the Ultor lobby in Gat out of Hell. 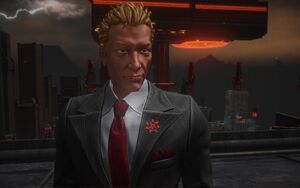 Close up in Gat out of Hell.
Dane Vogel.png

This article contains content derived from the "Dane Vogel" article on the Saints Row Wiki, licensed under CC-BY-SA.