Rule the Vampire Nation with Drake/Dracula (both failed).

Danica Talos is a vampire who is the CEO of Talos Industries and the secondary antagonist in the 2004 film Blade Trinity.

She was portrayed by Parker Posey, who later voiced Dreamcatcher in Skylanders Academy and played June Harris in Lost in Space.

Not much is known about Danica's past other than that she was a Catholic woman and she had a brother named Asher. They were some centuries ago attacked by some unknown vampire and was sired. She would like most vampires embrace her dark side and would form her own little empire and brought her brother Asher and another vampire, muscle-bound Jarko Grimwood. They would form a corporation and work with other vampire covens. She would be respected by other coven leaders despite the fact she wasn't a pure blood. Reason being, is because she had a knack for manipulating the human system and use human politicians, lawyers, and law enforcement like pawns. It often brought the vampire community much success and power.

She would also like many vampires have familiars doing jobs for her, including bring humans no one would miss to her and they would be part of a blood bank where they would forever produce blood and kept alive with machines. She would also have 'pets.' One of them was Hannibal King. He seduced her one night, brought him home. She would during sex sired him. He was made into her pet. She forced him to do very bad things, even tortured him for her own amusement. That is until Abigal Whistler, the daughter of Abraham Whistler freed him. Since then those two along with other members of the Nightstalkers were hunting vampires.

However, in the mist of all of this, she was looking for a legend. She was looking for a vampire named Drake, but he is known by his legendary name Dracula, the Patriarch of the Homius Nocturna; the father of all vampires. He had many names, one of those names being Dracula. It was a personal project of hers. Her obsession build even more after the arrival of one of the most ruthless threats that the vampire community has ever known, Blade the Daywalker. He has killed the renegade vampire Deacon Frost and the mutant Jared Nomak. Even though Deacon and Jarek were threats to the vampire community themselves and was happy to get rid of him, Blade himself was still a threat as well as the Nightstalkers.

Danica led an exposition to some tomb in Iraq and awakens Dracula along with Asher and Jarko. Dagon was pissed and he killed one the forth vampire that was with them. They somehow convinced him to join them. Shortly after, Danica put her plan into effect. She sets up Blade by making him kill one of her familiars who posed as a vampire. They got the feds to arrest him and in the process, had Abraham killed...albeit not intentionally, but it was a bonus. Danica would shortly after come to pick up Blade from a police station to kill him, or maybe torture him. But then Hannibal and Abigal came and rescued him, killing some vampires and injured Jarko in the process. That failure prompt Dracula, or as they would call him Drake, into 'joining the game' and wanted to kill Blade himself.

After a mission Drake was on to meet Blade, him and Danica made love and exchanged blood. Shortly after, Drake killed several members of Abigal's and Blade's Nightstalkers cell and brought an injured Hannibal and Zoe Sommerfield, the daughter of the Nightstalker deceased scientist, Sommerfield, as gifts to Danica. Danica along with Jarko and Asher pouneded Hannibal for information and threatens to sire him, starve him, and feed Zoe to him should he not comply with them. He never spoke and him and Zoe were rescued by Blade and Abigal. Danica and him had a final confrontation until a virus called Daystar, which was developed by Zoe's mother, was released and Danica (along with the other vampires) dies. 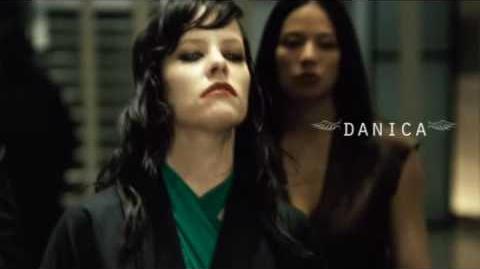