Daniel is the first antagonist encountered in neo-noir thriller game Detroit: Become Human. A deviant android, he has a vendetta against the Philips' family because he felt betrayed by the patriarch, John, leading the robot to murder him and take hostage her daughter, who must be rescued.

Daniel is a young, blond male with grey eyes. He is dressed with a dark-blue tenue. One thing, however, that distinguishes him from being human is his LED Circle on his right temple that can be either Red, Yellow or Blue depending his mood: a characteristic that results from the player's actions. He was injured in the right of his chest, because he was shot by a police officer who answered the Disturbance Call.

In 2038, the Cyberlife company manufactures androids whose appearance, personality and cognitive functions were similar to those of a human. These androids encounter a huge success as they are sympathetic, cheap and multifunctional. Daniel was a PL600, one of the many robots released by the company. He was bought by the Phillips and served has their domestic servant. Over time Daniel bonded deeply with the family daughter Emma; she even referred Daniel as the "coolest android in the world" in a video on a tablet.

However, these moments of peace do not last long, as the PL600 model was superseded by newer and better models, so the Philips eventually decided to replace their current android with a new one. This event caused Daniel to feel distressed and betrayed by his owners. Daniel ultimately lost his mind and after he realized he was going to be replaced, he killed the father, John and took Emma hostage on August 15th, 2038.

The Detroit City Police Department was quickly alerted and sent several officers on the scene. Daniel, in possession of a gun and with a deadly accuracy, shot to death officer Deckart, who was first on the scene inside the house. Then, Daniel moved on the terrace with the girl where he murdered two another officers.

In the chapter "The Hostage", the android Connor, sent by Cyberlife to aid the SWAT as a negociator, confronted the rebellious android and tried to get him to release Emma.

It is evident that, before turning insane, Daniel was a loving, helpful, caring and overall sympathetic robot who was always looking for the joy and safety of Emma. However, he was too deeply tied to his adoptive family, to the point of possessiveness. This proved to be a fatal mistake for the Philips, as once he learnt that he was going to be replaced soon, Daniel violently snapped and became a violent, cold-blooded, bloodthirsty and possibly sadistic murderer.

Daniel disagreed with the general treatment of androids and believes that they should be able to make their own choices. Daniel was openly hostile towards humans and didn't care if any of them were to die; he was even willing to kill a child, although it is unknown if Daniel would have actually took action. 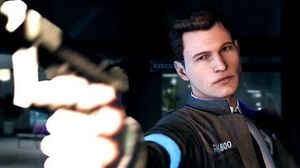