Member of the Nova 6 project (formerly)

Doctor Daniel Clarke is a supporting character in the 2010 video game Call of Duty: Black Ops. He is a British chemical engineer who defected to the Soviet union in order to assist in the creation of the Nova Project for Nikita Dragovich.

He was voiced by Gary Oldman, who also played Norman Stansfield in Léon: The Professonal, Egor Korshunov in Air Force One, Jean-Baptiste Emanuel Zorg in The Fifth Element, Count Dracula in Bram Stoker's Dracula, Carnegie in The Book of Eli, Drexl Spivey in True Romance, Vladislav Dukhovich in The Hitman's Bodyguard, Dreyfus in Dawn of the Planet of the Apes, Mason Verger in Hannibal, General Grawl in Planet 51 and Dr. Zachary Smith in Lost in Space, and voiced Ruber in Quest for Camelot and Lord Shen in Kung Fu Panda 2.

Daniel Clarke was born in the 1920s in Oxford, England. He was a vocal Communist sympathizer until anti-Communist sentiment arose in Britain, forcing him to defect to the Soviet Union, where he began working for Nikita Dragovich on the Nova project, specifically stabilizing the Nova 6 gas compound. However, Dragovich ordered his assassination when the project was over. Knowing this would happen, Clarke escaped, and went into hiding in South Africa. Clarke intended to seek refuge with his brother, but went to Kowloon City to get rid of his notes and intel.

He appears in the mission "Numbers", in which Special Agents Grigori Weaver and Jason Hudson track him down and capture him in Kowloon City. Clarke is interrogated by the two, and reveals that Friedrich Steiner invented Nova 6, before a group of Russian soldiers sent by Dragovich show up to kill him, forcing them to try and evacuate them. During their escape Clarke also tells Hudson and Weaver about Dragovich's base in Mt. Yamantau and about the number sequences. As the three fight their way across the rooftops, with Clarke blowing up a helicopter using C4, Clarke falls from one of the rooftops but is saved by Hudson.

However, Hudson refuses to let him up unless he answers questions about The Numbers, which keep appearing to Alex Mason whenever he gets brainwashed by Dragovich. Clarke attempts to answer, but is shot in the head by a Russian sniper before he can forcing Hudson to drop his body. 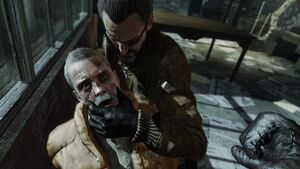 Clarke during his interrogation. 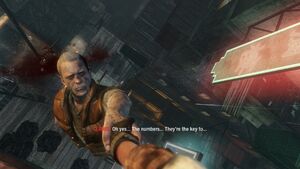