There Will Be Blood

Making money off of oil.

Gain as much money as possible.

Destroy all of his competition.
Get revenge of Eli Sunday for defrauding him.
Maintain a great status (all succeeded).

Daniel Plainview is the main protagonist of the 2007 epic drama film There Will Be Blood. He is loosely based on the James Arnold Ross character from the 1927 novel Oil!, who himself is based on the real-life oil tycoon Edward Doheny.

In the film adapation, he was portrayed by Daniel Day-Lewis, who also portrayed Bill "The Butcher" Cutting in Gangs of New York.

Plainview started as a silver prospector in California. When his leg broke in an mine shaft accident, he literally crawls out of the mine shaft and across the rocky plains with some of the silver he discovered. Some unspecified time later, he has turned his attention to oil, working with a small crew and has dug a well. After finding oil, one of the crudely designed digging apparatuses breaks and kills a worker, who happens to have a son. Plainview reluctantly takes the deceased man's orphaned son as his own and names him H.W. This proves to be useful to his future sales pitches, as he uses H.W. to play up people's sympathies.

Some time later, a stranger named Paul Sunday tells Plainview (at a price) of a town called Little Boston where there is a large amount of oil. Plainview takes up on the offer but not without threatening him that if he is lying he will have him murdered.

Daniel and H.W. travel to Little Boston under the guise of hunting quail. Plainview then meet Paul's father, Abel, with an offer to buy his land. Paul's identical twin brother, Eli, is wary of the bargain and confirms Plainview's true motivations, that the land is rich with oil.

Daniel quickly buys up the rest of the land, along with the notable exception of a large portion owned by a man named William Bandy. As he brings a large crew to build an oil derrick, Eli, who is a faith healer and leader of "The Church of the Third Revelation", requests he be able to bless the well and wants Daniel to introduce him. Plainview agrees but at the opening of the derrick he blesses it himself and brings up Eli's sister Mary instead. He also intimidates Abel into not physically abusing Mary for not praying.

The derrick has two accidents: the first kills a man, the second causes the entire derrick to set on fire and to injure H.W., which causes the child to go deaf. Initially, Plainview is delighted that the "whole ocean of oil" has finally surfaced, but later he is deeply troubled by H.W.'s newfound disability. When Eli demands money from the grief-stricken Plainview, the latter savagely attacks the preacher and angrily mocks him for being unable to heal his son.

Daniel then is approached by a man named Henry Brands, who claims to be his half brother. Baffled, Henry produces proofs of identity and certain Plainview family knowledge. Brands politely asks to work for Plainview, to which he agrees. The two share a contemplative conversation in which Daniel feels bitter and vituperative towards other people and how while he wishes he could become rich and self reliant by himself, he realizes he needs other people's help to achieve this.

H.W. discovers in Henry's diary that he is not in fact Daniel's brother and tries to kill him by setting him on fire, but does not succeed. Daniel, increasingly frustrated over being unable to communicate with or control his son, decides to send him to a school for the deaf. He dupes H.W. into getting on a train set for San Francisco, feeling that he is needed in Little Boston more to secure a transportation contract.

Daniel meets with Standard Oil to negotiate the selling of certain derricks. Already resenting Standard for cheating people on shipping costs, one of the agents, Tilford, draws Plainview's ire when he suggests that selling off all the wells will give time to Plainview to look after his boy. Daniel takes this to mean he has done a poor job at raising his son, and threatens to murder Tilford. He instead signs a deal with Union Oil, despite still not owning the Bandy property.

Later, Daniel becomes suspicious of Henry for not being aware of a presumably common local joke in Fond du Lac. The following night, Daniel holds Henry down at gunpoint and begins quizzing him about geographical details about their hometown. Henry reveals that he is not his actual half-brother but rather a friend of Daniel's half brother, who has since died of tuberculosis. Despite promising to leave and never return, Daniel shoots him in the head, killing the impostor, and buries him. He then cries himself to sleep after having looked at the pictures of his real half-brother.

Daniel awakes the next day to find William Bandy over him, who implies he is aware of the murder committed. He agrees to lease out his property for a pipeline (and to keep quiet about the murder) on the condition Daniel join the Church of the Third Revelation. Plainview, a staunch atheist, agrees with a great deal of reluctance and is put through a brutal initiation by Eli, who delights in having his revenge. After repeatedly striking Daniel as part of "removing the devil", he also forces Daniel to admit to abandoning his son.

As the final parts of the construction through Bandy's land are put through, H.W. returns with a sign language teacher. Daniel is overjoyed to have H.W. back again but quickly dismayed by the fact that he can't communicate with H.W. at all (and seems to refuse to learn sign language). He gloats over Tilford and Standard Oil about his success but simmers with resentment at Eli, who leaves Little Boston to do missionary work. Isolated and with wounded pride, Daniel starts drinking more than usual.

Years later, Daniel is shown to be living in an enormous mansion, but seems as unhappy as he was when he had nothing. He spends his time continuing deals, drinking heavily and shooting his possessions in boredom. He misses H.W.'s wedding to Mary Sunday; H.W. later approaches him with the request that he be released from their partnership so he can start a company in Mexico. Hurt, Plainview sardonically and cruelly berates H.W. and finally tells him his true origins. He disowns H.W., dismissing him as nothing more than a "bastard in a basket". H.W. finally leaves, saying he's glad he is not related to Daniel.

Daniel later gets drunk, apparently regretting the bad turns his relationship with H.W. had taken and is woken up in his bowling alley by Eli. The preacher admits that he has become financially ruined, and begs Daniel to enter a partnership with him to drill out Bandy's property. Daniel initially agrees but only on the condition Eli be put through a humiliating ordeal of having to admit that there is no God and that Eli is a charlatan. After making him say this repeatedly, Daniel reveals Bandy's land is useless as all the oil under it has been taken because Daniel has drilled into all the land around it, thus the oil under Bandy's has been sucked out by the surrounding derricks. Crestfallen, Eli begins to cry while Daniel harshly mocks and verbally abuses him, finally getting to Eli's Achilles Heel by telling him that Paul is an immense success. Daniel, in a state of insane rage, chases Eli across the bowling alley and finally beats him to death with a bowling pin. His flabbergasted butler comes down the steps, asking if everything is all right, to which the exhausted Plainview tells him "I'm finished". It's unknown as to whether or not he was arrested afterwards, although given his wealthy status, it's likely that he was able to get away with having murdered Eli. 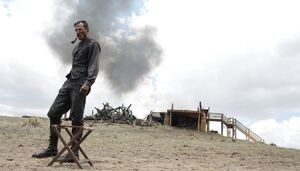