Killing people and draining them of the Speed Force

Daniel West, also known as the Reverse-Flash, is a villain who has appeared in the Flash comic books, and in the DC Comics. He is the third villain to go under the alias of the Reverse-Flash. He was given his super-speed abilities after crashing into Dr. Elias' stolen monorail car, powered by a Speed Force battery. He was also the younger brother of Iris West.

Daniel's mother died during childbirth, which earned him the loathing of his father, William, which resulted in Daniel being subject to his alcoholic father's abuse for years. While he was defended by his sister Iris, Daniel ultimately lashed out against his abusive father, shoving him down a flight of stairs and crippling him for life. In fear of his sister's disapproval, Daniel fled the house, abandoning Iris to live with her paraplegic father for years to come.

Daniel became a criminal in adulthood but tried to make amends with Iris, who resented that he had left her to care for their father. He was ultimately imprisoned by the Flash during an attempted heist, and released five years later, only to learn that his sister still resented him. He wads captured by Gorillas during an attack on the Gem Cities, but was rescued by the Rogues. Daniel attempted to flee, only to crash into Dr. Elias's monorail car, powered by the Speed Force battery, endowing Daniel with super-speed and giving him the ability to turn back time.

Daniel decided to use his newfound powers to turn back time far enough to kill his father and change his relationship with Iris. He began murdering those who had been touched by the Speed Force and drained them of it, increasing his power so he would be able to travel farther into the past. Eventually, the only ones who remained were the Flash and Iris, who was given a containment suit so Daniel could not sense her. Daniel lured the Flash to Dr. Elias' lab and turned back time to his last happy memory when he was eight-years-old, and then attempted to kill his father. However, he was distracted when his younger self and Iris arrived on the scene. The Flash managed to convince Daniel to give up his powers, and they returned to the present. Daniel was then imprisoned in Iron Heights, with Iris turning his back on him for good. 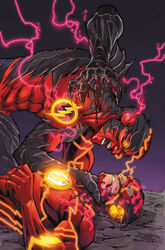 The Reverse-Flash battles the Flash 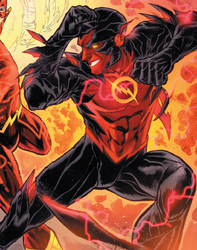 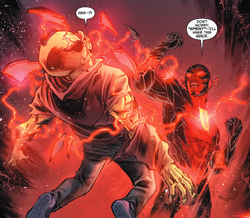 Reverse-Flash drains one of his victims 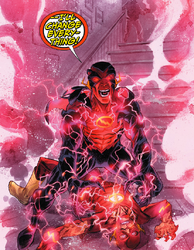 Add a photo to this gallery
Retrieved from "https://villains.fandom.com/wiki/Daniel_West?oldid=3701031"
Community content is available under CC-BY-SA unless otherwise noted.