Member of the Great Wheel of the Zodiac (formerly)

Daniel Whitehall, better known as the Kraken, is a villain from the Marvel Comics, appearing in Secret Warriors series. He is a legendary HYDRA agent and recuiter as well as a former member of the Great Wheel of the Zodiac.

Daniel Whitehall was a British intelligence agent operating a decade after World War II. Along with other intelligence agents (John Garrett, Thomas Davidson, Vasili Dassaiev, Cornelius van Lunt, Baron Strucker, Dum Dum Dugan, Nick Fury, Jake Fury, Shoji Soma and Viktor Uvarov), Whitehall was called by Leonardo Da Vinci, alias Aries, to form the Great Wheel of Zodiac. Each member was assigned a codename from the Zodiac Calendar, with Daniel's being Leo. The group consisted of the best covert intelligence agents from around the globe. After only a few key missions for Da Vinci, he would provide them resources that would be of great value to their own separate agendas. The mission was a success, and Vasili began conspiring with Viktor. Together, they betrayed the Great Wheel and stole the technology their missions had acquired.

Daniel Whitehall became the Kraken, a legendary HYDRA agent whose existence had been unverifiable until recently. Any S.H.I.E.L.D. agents that tried to find documented proof all disappeared. The Kraken preferred to work behind the scenes, seeing it as his mission to help people become what they are meant to be, usually with dangerous results. For decades he was responsible for developing HYDRA's best assets, training their best talent. This involved a lot of human trafficking, theft and murder. He was the head of the school that trained orphaned girls, including a young Viper, into human weapons.

Six years before Hydra's latest war with Leviathan, he met with a young Tomi Shishido, in Kobe, Japan. There he gave the boy the Godkiller Sword, as part of his mission to help people become what they are meant to be, in which it would result in him becoming Gorgon. Around this time he also arranged for a simple HYDRA recruit to be subjected to a genetically engineered parasite, becoming the creature know as the Hive. Again, this was a part of his self-appointed mission.

A year after that, he met with Baron von Strucker at his home on Hydra Island. There he informed Strucker of Tomi's existence, but he also told Strucker that he was dying. Strucker promised that one day, they would stand atop Fury and Uvarov's bodies in Pieta to exact vengeance.

Three years later, Jacob Fury went to the Kraken's home in London. Jacob knew Daniel Whitehall, but did not know him as the Kraken. In the London house, Jacob found the Kraken's journals, and learned his entire history under HYDRA. Jacob tracked down Whitehall, who laid dying in a hospital. There he took the Kraken's helmet against Whitehall's objections, and wore it himself. The helmet grew down Jacob's body, covering him in the Kraken's green armor. The new Kraken killed Daniel Whitehall by shutting off the machines keeping him alive. Jacob then infiltrated HYDRA's leadership.

Despite being killed and having his alias stolen, Whitehall's alter-ego as the Kraken was remembered as a legendary HYDRA agent who was crucial to their infrastructure and future leadership. This was proven when Tomi Shishido became Gorgon and a leader of HYDRA.

Daniel Whitehall made his live-action debut in the TV series Marvel's Agents of S.H.I.E.L.D. as the main antagonist of the first half of Season 2. In this version, he is a Nazi scientist and HYDRA leader who gained longevity from dissecting the Inhuman Jiaying. Unlike the comic book version, he doesn't use his "Kraken" codename but is regarded as one of the organization's most prominent leaders.

He was portrayed by Reed Diamond. 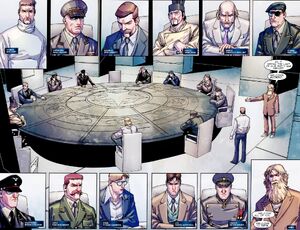 Whitehall alongside the other members of the Great Wheel of the Zodiac. 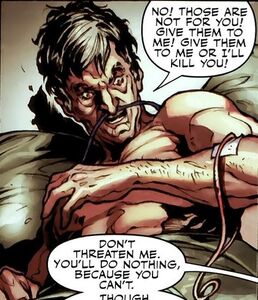 An aged and dying Whitehall, moments before his death. 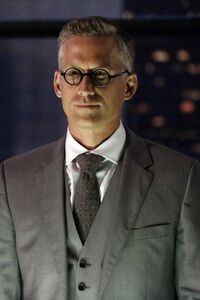