Enjoying luxury and the fashion scene.
Staying rich.
Smoking hookah.
Seeing humans as ugly and miserable people.
Enjoying the finer things in life.
Drugging and trapping people in their most beautiful dreams forever.

To have herself and her couture coven remembered in history as the ones who defeated Kaulder (failed).
To aid Belial in retrieving the the heart of the Witch Queen (succeeded) to celebrate her fellow witches' new reign once the Witch Queen returns to eradicate all humans in the world (failed).

Danique (full name: Danique Van Dorn), also known as the "Eastern Veil, is a villainess in the 2015 supernatural action movie The Last Witch Hunter. She is an Easter European witch who lives a luxurious lifestyle in America while underneath her form as something of a typical fashion model due to her skill in the craft of glamour, a form of magic used in casting illusions and altering physical forms. She enjoys the fashion scene and loves smoking hookah and she does take delight in the fashion scene. She has a mastery of only memory potions but she is capable of drugging people and permanently trapping them in their own most beatific and precious dreams via magic.

She was portrayed by Dawn Olivieri.

Kaulder and Chloe go to a place where witches are disguised as beautiful women, even in the style of fashion divas with the power of magic gems and vanity charms that conceal their physical deformities and old age. They find the woman who presides over them, Danique Van Dorn. This snobbish and glamorous sorceress who was born in Eastern Europe and lived for a couple hundred years, had been informant of Kaulder's for a long time, knowing that not only he serves the Axe + Cross organization, but she recognized him as the known immortal human who has walked through the ages and encountered many of history's famous and controversial figures such as Napoleon Bonaparte, Rasputin, Joseph Stalin and Adolf Hitler. He told her that there is no need to be nostalgic about it for the world had enough evil in it. She than blows a smoke from her hookah which puts Kaulder under a trance where he sees Helena and Elizabeth.

Chloe enters Kaulder's mind and breaks him out of the trance. Kaulder grabs a blue square-shaped gem from Danique's gold pendant. They then interrogate Danique over her business with the renegade warlock Belial. She confesses that he sells her the vanity charms powering her glamour magic in return for helping him obtain the heart of the legendary Witch Queen and selling him burial dirt used for her resurrection ritual. Before they leave together, Chloe grabbed Danique's gem from one of her champagne glasses, and she mocks her by saying "You know what I liked about thrift shops? Everything in them is old.". She then steps on and crushes Danique's precious gem which destroys her physical beauty in the process, making her look like a hag once again. The furious Danique calls Chloe a "b--ch", never forgiving her for ruining her precious, fabulous life.

Danique's supernatural beauty is maintained by a forbidden vanity charm. Her trade in illegal herbs and tinctures is facilitated by her couture coven, who serve as her personal guards. According to axeandcross.com, the name of this power called Glamour. 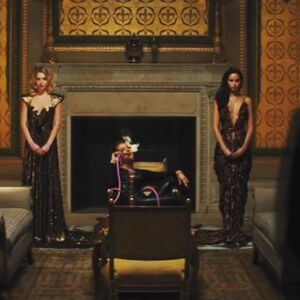 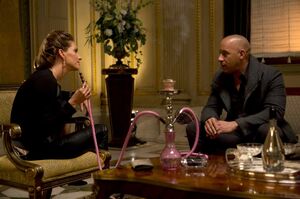 Danique's true form.
Add a photo to this gallery

Retrieved from "https://villains.fandom.com/wiki/Danique?oldid=3372152"
Community content is available under CC-BY-SA unless otherwise noted.