Danno Wolfe is the main antagonist of the 2009 direct-to-DVD sequel film Curious George 2: Follow That Monkey! He is the head of security for the magician Piccadilly and when he suspects that George and his yellow-hatted owner Ted have captured Pickadilly's elephant Kayla--the star of the show, he becomes bent on capturing them at all costs--even if it means through illegal means.

He was voiced by Jamie Kennedy.

Danno Wolfe is a tall, slender man with short slick brown hair. He usually wears dark grey sunglasses, a light brown windbreaker jacket with red t-shirt underneath and blue jeans and grey sneakers. Danno Wolfe does not wear a wedding ring and does not have a wife and kids, which makes him a single man. He is also shown to be a straight man.

Danno Wolfe is shown to be very proud of being Piccadilly's head of security as he states this several times. His pride causes him to take his job too seriously and believe his far from accurate accusations are always correct without further investigation and despite evidence of the contrary. Danno also does not have very good deductive skills, as he initially thought that George was a person who speaks Chinese. Danno Wolfe's age is shown to be around his late 20's or early 30's, which makes him 29 or 30.

Danno Wolfe is the head of security who is assisted by Mrs. Fisher. Danno questions Ted about the kidnapped elephant and gets suspicious about him and George. Later a cryptic message from a monkey Danno thinks speaks Chinese leads him to believe that George and Ted have kidnapped the elephant. He begins attempting to find them. Danno was even more certain that Ted and George have kidnapped Kayla, when Ted uses what little change he has to call Piccadilly, but does not manage to complete the call. Mrs. Fisher traced the call which allowed Danno to find his way the Humbleton station.

At Humbleton Station he is told by the staff owner that Ted was chasing after the California Express which was planning to stop at Grand Junction.

With two henchmen by his side, Danno arrives at Grand Junction only to learn that Kayla, Ted, and George had escaped his clutches due to the boxcar uncoupling from the rest of the train. Later on Danno shows up in a helicopter at Kayla's home, when the protagonist's were about to leave there. After the pig throws Danno into a rain barrel, Kayla scares the pilot into flying away. At the park, Danno shows up again and arrests George and Ted and captures Kayla.

They fly back to the city, but after George gets the handcuff keys from Danno, they all escape by jumping out of the plane. They make it back to Piccadilly and everything is fine, except that Danno has followed them once again. Kayla subdues him and throws him onto the stage's trapdoor which Piccadilly opens, dropping Danno onto the same mattress he fell on earlier. Danno then asks Ms. Fisher what he is doing wrong to which she responds "I think you need to work on your people skills.". Danno retorts "I bet they have an internet course for that" and most likely redeems himself afterwards. 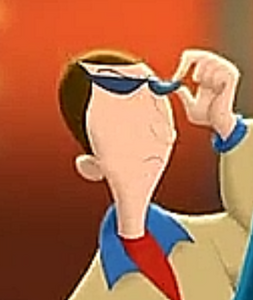