Scavenging for food
Protecting his treasure

Danny Darrow is a minor antagonist in Scooby-Doo! Mystery Incorporated, being the main antagonist turned supporting character in the episode "Escape from Mystery Mansion". He is a crazed hermit and the last surviving member of the Darrow family.

Due to his self imposed exile and obsession over his treasure, he has grown into a decrepit old man with an unkempt look after living over 70 years underground.

After the Evil Entity was destroyed, a new timeline was created with Danny looking much healthier than he did in the previous timeline.

After being alone for so many years, Danny has grown a very violent aggression personality because of his obsession for his treasure. However, after being outsmarted by Mystery Inc, he finally comes back to his senses and is much more gentler and remorseful of the error in his ways.

When Danny was still a young child, he and his family were a mystery solving group known as "The Mystery Fellowship" and one of the many people who were manipulated by the Evil Entity. On a Halloween night, Danny and his family had come upon one of the pieces of the planispheric disk, a key to finding the cursed treasure of Crystal Cove. The disk piece corrupted Danny and his entire family with greed and caused them to fight over possession of it. When Danny had just got his hands on it, an earthquake caused their entire mansion to be swallowed up below ground.

Danny had somehow survived underground for about 75 years, outliving his family because he was the youngest. When he was disturbed by the old Mystery Incorporated he thought they were after his treasure, and he tried to fill the mansion with traps for them, but they left while he was still working on the traps.

When the gang discovered a way down to the mansion, his crazed mind mistook them for the original Mystery Inc., and he tried to trap and kill them. However, they managed to escape, and eventually he realized they were not who he thought. Unfortunately, all the traps in the house that were set off, caused the area's faultline to reawaken. Danny then gave them the puzzle piece and let them escape, just as the ground around the mansion began to collapse. He is presumed to have died in the collapse.

After the Evil Entity was destroyed, a new timeline was created with Danny now the owner of Darrow Mansion, which never sunk underground. 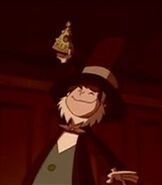