Danny McBride (This Is The End)

Note: This article is ONLY for Danny McBride's fictional portrayal in 2013 film This Is The End, NOT about his real-life self.

This Is The End

Actor and comedian (before the movie)

Eating well.
Drinking well.
Making movies
Doing drugs such as marijuana and ecstasy.
Having sex with Channing Tatum.
Eating other people.
Having high power over other people.

Daniel Richard "Danny" McBride is the central antagonist of disaster black comedy film This Is The End.

Unlike his real-life counterpart, the movie version of Danny McBride is portrayed as a selfish and homicidal idiotic manchild who uses up food and water that the rest of the boys is carefully trying to ration. He is actually a protagonist at first due to his friendship with Jay Baruchel and Seth Rogen, but later ended up as an antagonist when his rival James Franco kicked him out.

He was portrayed by himself, who also played Boss Wolf in Kung Fu Panda 2 and Sonny in Arizona.

Apocalypse Began and The Living Misfortune of the Group

Danny comes to James Franco's house without being invited. He falls unconscious from drinking lots of alcohol in Franco's bathtub therefore he failed to notice that an apocalypse was happening on Earth and Jay, Seth, Jonah and Craig became forced to stay with Franco at his house to stay alive, with each agreeing to preserve their limited food supply as much as possible.

Danny then takes out Franco's food to make breakfast for himself without permission and when all of the five celebrities were sleeping. Danny used up almost all the food they had left such as eggs, cereal and bacon to make a huge all-you-can-eat for himself. James quickly objects to Danny using up most of their food without asking them.

Next, Danny started using up much of their limited water supply complaining that he deserves it since he's more thirsty and weighs more. Franco objects to being patient with Danny any longer, complaining that patience was a mistake since Danny has an overeating habit and that he saw him visibly gain weight while they were all hiding in Franco's house. After the group finally has enough, they kick him out of James Franco's house. McBride storms out of the house without hesitation.

Later, the surviving characters run into Danny again, who has become the leader of a gang of cannibals with Channing Tatum as his sex slave/pet. Seth Rogen and Jay Baruchel escape, but James Franco fights off the gang and tries to get Raptured. The Rapture fails miserably due to him flipping off Danny. As James begs to be sent up again, Danny warns him that he was being petty before he joins the cannibals to eat him alive. He then gets the cannibals to chase after Seth and Jay, though the two escape and eventually get raptured into Heaven themselves.

Of all the main characters, Danny's fate at the end of the movie is left unrevealed. The viewer however can tell that because the world was incinerated by fire, earthquakes and sinkholes, Danny possibly died one of two ways. He and his gang may have starved to death not being able to find food or water, and it is unlikely they will find any other humans to eat besides Franco. Another likely fate for Danny is he was killed by Satan or one of his demons since he wasn't very far from them.

Danny is portrayed as a self-righteous, egotistical, cocky, uncaring, remorseless, basically assholic individual who only cares about himself. He crashed James Franco's party and drank all of the beers in his bathtub until he was passed out, and while the rest of the people were sleeping, he prepared a breakfast and wasted all of the bottled water just to wash his body, also using the food all for himself by using the food they organized for rations.

James Franco noted he gained weight while he was there for real, further proving this point. He masturbates all over James Franco's house with a defiant attitude, and when they are having dinner, he serves himself a second glass of water even though they all agreed to only one glass.

He quarrels it's because of his weight that he needs more, but when they still deny him, he chugs all of the water and ruins it for everyone simply for being petty. It gets to the point that everyone decides to kick him out because of this, and when he realizes this, he fibs to them all about how he made the breakfast as an apology, even though it was only for himself, and when James gives him his gun, he shoots everybody, and would have slaughtered them had there been any real bullets inside the gun. When he got blamed for this attempted murder, he simply says whatever, claiming all of his friends are self-righteous. Interestingly, it appears that out of all of the people he was with, he held the least resentment toward Craig. This can be seen when he does not shoot Craig, instead opting to shoot Seth twice, and when he insults everybody, he just states he was very disappointed in Craig, not going beyond that in comparison to everybody else.

Only for the Rapture to fail!

Danny then used this opportunity to maul Franco alive.

Danny with a piece of Franco's face before feast on him. 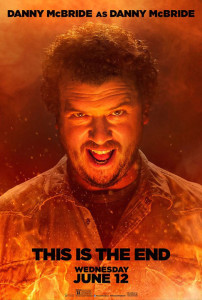