Danny St. John is a character in the first season of Telltale's The Walking Dead. Although at first he and his mother and brother appeared friendly towards Lee and his band of survivors, Danny was eventually revealed to be one of the three main antagonists of the second episode "Starved for Help" (alongside his family), who resorted to murder and cannibalism in an effort to stay alive during the zombie apocalypse.

He was voiced by Brian Sommer.

He and his brother Andrew are members of the cannibalistic St. John Family. Danny was the secondborn of his parents, and was more openly hostile, having a predatory nature whilst both his brother and mother had disturbingly calm outlooks on the work they did.

Danny, like his mother and brother, was quick to silence anyone who may jeopardize their way of life and when Lee and the other survivors became aware of the cannibalism (after being served Mark's meat) he was the first to say that they would eat the other survivors as well, once they became ill or dying.

Once they find out that the bandits shot Mark with an arrow, Danny helped Lee go scouting to find their camps and take revenge. They discovered and found a small camp where they found Clementine's hat. Jolene then confronted them and tried to kill them with her Crossbow. If Lee doesn't decide to kill Jolene, Danny will instead shoot her in the head without warning, then claims once they see her corpse the others will get the message.

Since Mark has been wounded, Danny and the others cut his legs off and then used the meat as their dinner. Though Lee found out and warned his group to prevent them from eating, so Danny and Andrew got out their guns to stop them from escaping. Lee is then knocked out and they are locked up in the Freezer Room except for Duck and Katjaa.

Thanks to Clementine, Kenny and Lee managed to escape and went to save Duck and Katjaa as well as take down Danny, Andrew and Brenda. The two found out that Danny was placing out Bear Traps, once they looked again, Danny tried to kill them with his Shotgun but Lee put it away and sliced him.. Kenny then opened the door which hit him and then sliced him, causing him to fall into his Bear Trap and then fell on the hay.

In No Time Left, He was mentioned by the Stranger where he criticized Lee for killing Danny with a pitchfork in front of Clementine If Lee does decide to kill Danny. 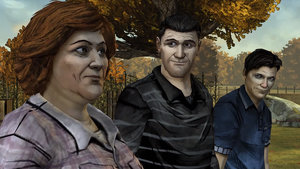 Danny with his brother and mother. 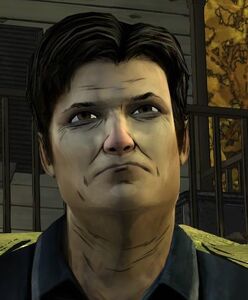