Committing atrocities in villages with his biker gang.

Ordering his men to murder and torture people while watching for his own amusement.

Dante the Immortal is the main antagonist in Violence Jack: Hell's Wind. He is the leader of the biker gang known as Hell's Wind. He also has two henchmen known as Gokumon and Guro the Drifter.

Dante is a wicked, sadistic, and heartless individual who enjoys seeing innocent people suffer in horrible ways for his own amusement. He and his motorcycle gang commit atrocities such as raping women, murdering people, torturing people, and destroying villages without showing a single sign of remorse or emotion. Although he himself isn't seen doing anything evil (at least in the anime), he still orders his fellow motorcycal members to commit the most heinous things imaginable and it's obvious he himself isn't above doing the same horrible deeds either. He is also not above betraying his own members, for example when he forces one of his men to be a suicide bomber to kill Jack. Despite evil, he is also a coward, seen in the example he runs away from Violence Jack after he challenges him. later on, Dante is eventually killed by Jack by having his skull crushed. It is later revealed in the anime adaption that Dante and his motorcycle gang work for the Slum King.

Dante wears a leather biker outfit, and he has bandages wrapped around his face possibly due to an injury.

Dante, the self-proclamed Immortal, as he appears in the anime. 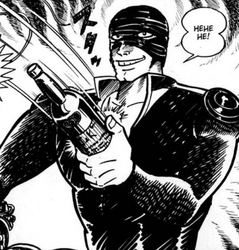 Dante as he appears in the manga.

Dante having his head crushed by Jack in the anime. 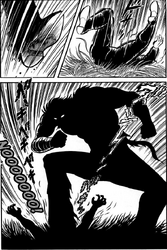 Dante's death in the manga.
Add a photo to this gallery

Retrieved from "https://villains.fandom.com/wiki/Dante_the_Immortal?oldid=4084610"
Community content is available under CC-BY-SA unless otherwise noted.