Ability to create replicas of himself

Danton Black, nicknamed Multiplex by Cisco, is an antagonist in the first season of The Flash. He is a meta-human, having gained the power to replicate himself.

He was portrayed by Michael Christopher Smith.

At a university gathering honoring Simon Stagg, Danton Black and his replicas arrive, intending to kill Stagg. However, Stagg has already left. Disappointed, Black and his replicas start taking valuables from the guests. One security guard then tries to stop the robbers, but is outnumbered. Every replica moves simultaneously and shoots at the guard, who is saved by the Flash. Barry follows the robbers but passes out as they enter their van.

After the failed attack, he meets with Java, Stagg's head of security in an alley. Java asks Black where the rest of his crew is but Black responds that he is alone. When asked what he wants, Black replies that he wants Java's boss dead. Java tells him that he told Black where Stagg would be, not how long he would be there and that it was not his fault Black and his team moved to slow. Black then demands security access to Stagg's office and home from Java, but Java refuses as he has a reputation in the security business to keep and it makes a difference if his employer gets killed or if his employer gets killed in his bedroom. Black threatingly tells Java that he should do as Black says, but Java responds by hitting him in the face. Black falls to the ground and Java turns to leave, rhetorically asking Black what he is going to do without his army. Angered, Black creates replicas of himself, who advance on Java while he tries to enter his car and beat him to death.

Detectives Joe and Eddie meet with Stagg, as they are correctly guessing that he is targeted by the robbers. During the conversation they mention Danton Black, who worked for Stagg but was fired. They mention that Black is currently suing Stagg. However, Stagg assures them that Black is not the murderer as he is a criminal researcher and not a criminal mastermind. when Stagg plans to leave, they are ambushed by Black and two replicas. While Joe fires at the attackers, Eddie brings Stagg to safety. Joe manages to shoot one replica, but Danton merely creates another. While the attackers advance on Joe, the Flash arrives and swiftly takes their guns. After bringing Joe to safety, the Flash demands that Black and his replicas give themselves up but they respond that they are not going anywhere until Simon Stagg is dead. Barry then attacks, but Black keeps creating new replicas who eventually defeat the Flash and beat him up badly and Barry is forced to flee.

When Barry is called by Caitlin and told to come to Star Labs, he arrives to find out that Caitlin grew a replica from Black's cells, however it is motionless. From this, the team deduces that every replica is contolled by Black. This means that if Black is taken out, his replicas are as well. However, the replica suddenly moves and is promptly shot by Joe, who has arrived to apologize to Barry. Caitlin realises that this means that Black has called his replicas to battle and that this means that Stagg is in danger.

Indeed, Black and his replicas arrive at Stagg Industries, killing every security guard on the way. Eventually, Stagg walks out of his office, right into Black who attempts to shoot him. However, Barry grabs Stagg and brings him back into his office. He then attempts to reason with Black, but Black shoots at him. Determined to stop Black, Barry keeps attacking but each time only fights a replica. While fighting, the replicas tell Barry that Black does not want to kill Stagg because Stagg stole his research, but because Stagg stole Black's research when Black was about to clone a new heart for his dying wife. Eventually, Barry manages to isolate the true Black and knock him out, causing the other replicas to faint as well. However, the real Black regains consciousness and lunges at Barry, but Barry quickly moves aside and Black smashes through a window. Though Barry grabs his hand and tries to save him, Black wrenches himself free and falls to his death.

Black' replicas during the robbery 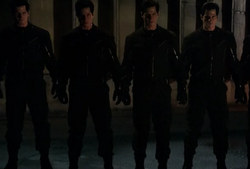