Extorting the residents of Broker, including Roman Bellic.

Get Roman to pay his debt (failed).

Dardan Petrela (April 12, 1975 - April 2008) is a minor antagonist in Grand Theft Auto IV, who serves as the first enemy in the game. He is a member of the Albanian Mob and is notorious for his loan-sharking activities in Broker.

He was voiced by Peter Linari.

A member of the Albanian Mob, Dardan operates out of Broker alongside his two underlings Bledar Morina and Kalem Vulaj, and is a notorious loan-shark, harassing the low-class immigrants who live in the area. Roman Bellic owes Dardan a significant amount of money due to gambling, and in spite of Vlad Glebov's orders to leave him alone, Dardan and his men continue harassing Roman for money.

Eventually, Dardan and his thugs show up at Roman's office and smash his computer, threatening Roman with a knife if he continues not paying them. However, Roman's cousin Niko Bellic, who had just arrived in the city, appears just in time and manages to scare the Albanians off, though they promise to retaliate.

Later, Dardan orders Bledar and Kalem to beat Roman up while he is at a basketball court, but Niko arrives before they can inflict serious wounds, and beats both of them up. Spotting Dardan nearby, Niko then chases him and corners him at an industrial warehouse, where Dardan tries to kill Niko with a blade, but is instead pushed off the window and falls to his death at the river below.

Dardan is a middle-aged man with green eyes and dark gray hair. He wears a white shirt, a dark green vest, and gray trousers.

Dardan is a very violent, impatient, intimidating, and aggressive man who does not hesitate a second to assault his unfortunate victims in their houses or basements, including Roman. He is implied to be quite xenophobic and inequitable, as he despises low-class immigrants. He is very short-tempered and volatile, claiming to be paid at times in any circumstances. However, he looks terrified when Niko confronts him. 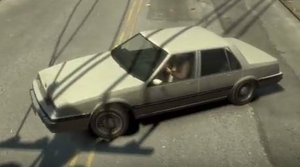 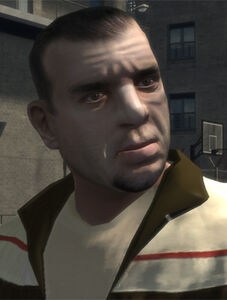 Bledar Morina, one of Dardan's friends. 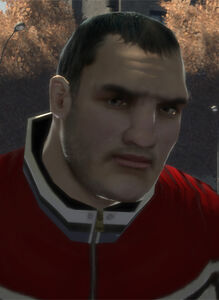