Dario Agger, also known as ​The Minotaur​, is a major antagonist in modern Marvel comics, primarily appears as a recurring antagonist of the Thor series. He is the corrupt President of Roxxon Energy Corporation, and a human with the ability to transforms into a Minotaur.

Dario Agger is the new CEO of the Roxxon Corporation. As a child, his family's private island is attacked by pirates and his parents were killed. Dario fled to a cave where he prayed to a unknown dark god to help him get revenge and the deity gave him the power to transform into a powerful minotaur.

As head of the Roxxon Corporation, he strives to make as much money as possible, regardless of the impact Roxxon's activities have on the environment, and he uses his wealth to get lobbysts and lawyers on his side in order to be able to pollute as much as he wants without getting into trouble with the law.

His most frequent critic and rival is the SHIELD agent Rosalind Solomon, who convinced the god of thunder Thor to help her in disrupting Agger's plans.

Later, after Jane Foster became the new Thor, Agger teamed up with Malekith the Accursed to try to conquer and exploit the resources of the ten realms and he also became a member of  the Universal Bank.

Dario Agger can transform into the Minotaur. In his Minotaur form, Agger has great superhuman strength and he seems to become more vicious and sadistic, as he joined Malekith in the killing of a group of Light Elves. 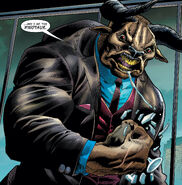 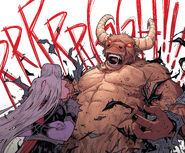 Retrieved from "https://villains.fandom.com/wiki/Dario_Agger?oldid=3561309"
Community content is available under CC-BY-SA unless otherwise noted.