Dario Brando is a minor but pivotal antagonist in JoJo's Bizarre Adventure, serving as the overarching antagonist of Phantom Blood.

He is the abusive father of Dio Brando, who also steals fortunes from the dead. Although a seemingly minor villain of the anime and manga series, the impact he left had a lasting mark on the overall story of the JoJo's Bizarre Adventure series, which also led Dio to become an even more dangerous individual despite the frequent abuse from his own father.

He was voiced by Tadashi Miyazawa in Japanese and Steve Kramer in English.

Dario is an old man with gray hair and a long gray beard. He has many missing teeth and in the anime, his teeth are yellow. In the manga and in the movie adaptation of JoJo's Bizarre Adventure: Phantom Blood, he had a scar on his head but in the anime, he doesn't.

Dario is incredibly greedy as he steals from the dead and cares for money more than his own wife and son. At one point, he left a baby to die in order to steal a ring from someone he thought was dead. He is addicted to alcohol, something which lead him to be an abusive father towards Dio. This constant abusive behavior caused his son, who already had a potentially dangerous trait to begin with, to become the monstrous person who would plague Joestar Family for many generations to come.

When George Joestar had a wagon accident on his way back home from auction of Stone Mask (at the time it was thought to be a mere ancient relic), Dario witnessed the crash and attempted to loot the wreckage on the assumption that there are no survivors. But a girl whom he made his accomplice noted that someone is still alive, Dario was seen by George, who assumed that Dario saved his life and felt indebted to him. But even when George later learned the truth when the head inspector alerted him that Dario was incarcerated from trying to pawn Mary Joestar's wedding ring, George pressed no charges and asked Dario to become a good man for his family. But even after receiving money from George to start a new life and business, Dario ended up right back in poverty and worked his wife to an early grave.

For the next twelve years, Dario took out his frustration on his son Dio as he grew to hate his father but still did his best to look after him. Then one day, Dario, in a drunken fit, threw the dress of his late wife to the floor and ordered his angry son to trade the dress of his wife for money. This was the final straw for Dio Brando. Dio secretly plotted to murder him with a poison of Chinese origin (exotic item so British police cannot trace the poison) he got from Wang Chan. With Dario unaware that his own son poisoned him, he died telling Dio of the debt George made to him and tells his son to take advantage of it. Even so, Dio's profound hatred towards Dario never disappeared.

In a letter it contained that Dario, knowing of his impending death, pleaded George Joestar to adopt Dio and raise him as his own. It states that Dario, while not really minding of his own miserable and wretched life coming to an end, his son Dio, would be left alone and would be forced to fend for himself. Not wishing to have his son repeat the same miserable life as he had, Dario asked George Joestar to adopt Dio. It is extremely unlikely that Dario was aware of Dio's diabolical intention towards the gentleman who saved him. So begins the long curse and enmity between Dio and Joestar Family. However, Dio was unaware of the letter Dario had sent to the Joestar Mansion, which would played a pivotal role in exposing his attempted murder of George seven years after his father's death. 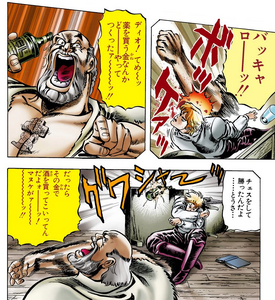 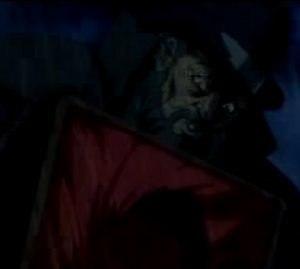 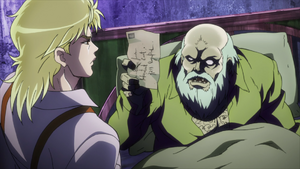 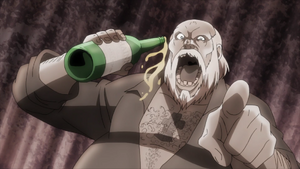