The Hand of Noxus

General of the Trifarian Legion

Darius, also known as The Hand of Noxus, is a villainous playable character in the multiplayer online battle arena game League of Legends. The most feared and respected general in Noxus, Darius earned his place as leader of the Trifarian Legion through his brute force and unending loyalty to the empire's cause, and remains the public face of Noxian might. While generally portrayed as a villainous character, he is the main protagonist of the Darius: Blood Of Noxus comic.

The 98th champion added to League of Legends, Darius was released on May 23, 2012, and is one of the most popular characters to play in the top lane.

He is voiced by Chuck Kourouklis.

An orphan in the port city of Basilich, Darius had to fight for survival from a young age, protecting his younger brother Draven from the local gangs and even the city guard. Draven would often get into trouble with the older urchins, forcing Darius into numerous fights and gave him multiple battle scars. During his time as an orphan, the brothers also met Quilletta Varn, a girl they accepted into their group. Darius and Quilletta became very close and fell in love, but things soon changed when the Noxian army arrived to conquer Basilich.

The Hand of Noxus

To avoid bloodshed, Basilich opened their gates to the empire, surrendering to Noxus without a fight. Angry at the elders' cowardice, Draven attempted to assassinate the Noxian commander, Cyrus, though Darius tried to stop him. When the attempt failed, Cyrus was impressed with the orphans, welcoming them into the Noxian military, where he believed their violent efforts would be better spent.

In Cyrus' warhost, Darius was the perfect soldier and embraced Noxian ideals with vigor. In Basilich, Darius was a lowly urchin, but as a Noxian, Darius was able to ascend the ranks with nothing but his sheer loyalty and strength. In battle, Darius refused to retreat, beheading his own generals whenever they displayed cowardice and winning many victories even when he was sorely outnumbered. It wasn't long before Darius was awarded with his own warband, earning a reputation as one of the fiercest and deadliest warriors in all of Noxus.

Darius fought in campaign after campaign with more discipline than Draven and more fervor than Quilletta, which eventually grew into a rift between the three former companions. Draven left the Noxian army for the gladiatorial pits of Noxus Prime, and during the Ionian invasion, Quilletta was disgusted at Noxus' use of Singed's chemical weapons, leaving the army to become steward of Basilich. But nevertheless, Darius remained at the head of Noxian forces, having been named the Hand of Noxus by the emperor Boram Darkwill himself.

As Darkwill's top general, Darius was commanded to lead the campaign against the Freljord, and the Ionian war left the forces in the far north stretched thin. As a result, Darius fought the barbarian tribes to a bitter stalemate, and after many years he marched back to Noxus in hopes that Darkwill would reconsider his strategy.

But when Darius returned, he was surprised to find that Darkwill was dead, having been killed in a coup by disgraced general Jericho Swain, who had been aided by a dark demonic power and was already supported by numerous allies, including his brother Draven. Confused as to what he should do next, Darius knew that the noble houses would want him to avenge Darkwill's death against the usurper. But Darius greatly respected Swain, and realizing his oaths were to serve Noxus (not the emperor), Darius gladly accepted Swain as the new Grand General.

Swain had a new vision for the Noxian leadership, reorganizing the empire so it would not be ruled by a single emperor but instead the Trifarix, a council of three based on the Noxian princles of strength: Vision, Might, and Guile. Darius would represent Might, and raised a elite military order known as the Trifarian Legion, the enforcers of the Trifarix itself. As one of the empire's new leaders, Darius has pledged to lead Noxus into a new age of glory and conquest.

In game, Darius is a juggernaut-type champion, using his durable armor and mighty battle axe to slice through anyone who gets too close. Darius' passive, Hemorrhage, means his attacks make his enemies bleed for 5 seconds, which deals damage over time depending on how much they were hit. Darius can use Decimate to swing his axe in a circle to hit enemies, Crippling Strike to slow enemies as they bleed out, and Apprehend to pull enemies toward him with his axe's hook. Darius' ultimate, Noxian Guillotine, has him jump in the air and hit an enemy with his axe, dealing more damage for each stack of Hemorrhage, and if the target dies, the ultimate's cooldown is refreshed for a short time.

A battle-hardened military leader, Darius is renowned as one of the most brutal and fearless warriors in all of Noxus. Completely devoted to the empire, Darius obeys his orders without question, even when they are morally-reprehensible, such as when he excused Singed's use of chemical warfare as a necessary evil for the Ionian war. Though he fell in love once, Darius was forced to separate himself from Quilletta when she defected, and after her death, Darius once again completely dedicated himself to the empire.

Like most Noxians, Darius values strength above all else, and follows a "might makes right" ideology. As a result, Darkwill was overthrown, Darius was more than willing to swear loyalty to Swain, as the new Grand General had earned his respect for his many years in battle. A warrior intent on fulfilling his empire's goals, Darius believes in victory by any means necessary, even if he must sacrifice his own honor to do so. While a war leader, Darius is not a sadist and carries out his orders with cold-blooded efficiency, seeing the empire's goals as the most effective reason to use his might over personal goals or bloodlust.

Having been an orphan, Darius despises the monarchs and nobles across Runeterra, as he sees them as weak and unfit to rule over their much more hard-working slaves and soldiers. As seen in the "Darius: Fear" cinematic, Darius believes that fear is the single greatest weakness in humanity, and seeks to eliminate all his own fears to become a great warrior. When others display fearlessness, such as the slave girl in "After Victory", they can earn Darius' respect, allowing them to ascend the ranks of his own army. He even has a begrudging respect for Tryndamere, the Avarosan barbarian king in the Freljord who fights his own battles. 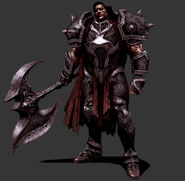 Darius as he appears in Legends of Runeterra.

Darius and the Trifarian Legion in "After Victory".

Darius in the "Darius: Fear" cinematic.

Darius in the "Breathe" music video.

Darius and Quilletta in the Darius: Blood Of Noxus comic.

Darius, the Hand of Noxus Login Screen - League of Legends

Tales of Runeterra Noxus “After Victory”