Powerful flames attacks
Ability to turn his tail into iron

Aid their masters with their goals.

DarkTyrannomon is a giant Champion level Dinosaur Digimon shaped like a T-Rex (Tyrannosaurus Rex). It's skin color is black with blood red stripes on it's body. It has green spines on it's back, and belts wrapped on it's hand.

The first DarkTyrannomon the kids encountered was one of Myotismon's minions. He first appeared when Myotismon isolated Odaiba from the rest of Tokyo in his search for the Eighth Child (Which is Tai's little sister, Kari). Mr. Ishida and his friends had a close run-in with him but escaped unharmed. DarkTyrannomon reared his head again when the captive populace of Odaiba attempted to escape from the convention center. Togemon battled him but she was outmatched. DarkTyrannomon was all set to finish off Mimi's parents when Mimi's Crest began to glow, allowing Togemon to Digivolve to Lillymon. Lillymon used a flower chain to tame the savage beast, rendering him harmless. Then Myotismon showed up and angrily blasted DarkTyrannomon back to the Digital World as punishment for its failure. In the Japanese version, however, Myotismon actually killed DarkTyrannomon at this moment. 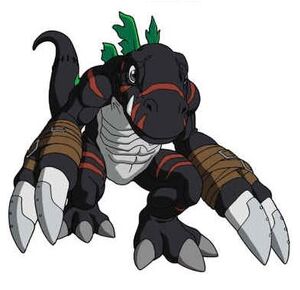 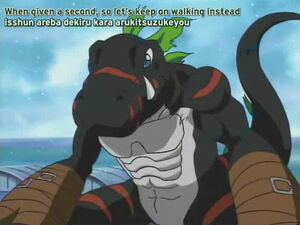 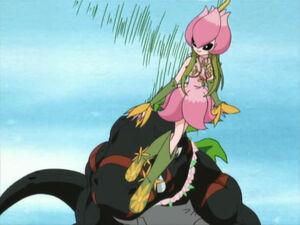 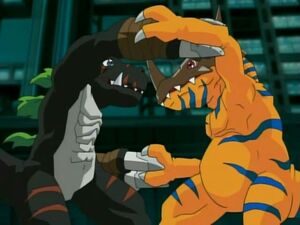 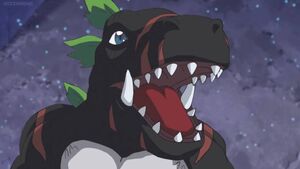