Fighting crime by any means necessary.

Maintain control and his rule of Saint Canard.

Stop all crime (even minor ones) with violence.

DarkWarrior Duck is the main antagonist of the Darkwing Duck series episode, "Time and Punishment". He is a twisted future counterpart of the titular hero who became the tyrannical ruler of St. Canard.

Just like his past-heroic counterpart, he was voiced by Jim Cummings.

DarkWarrior Duck wears a much more threatening-looking costume than his former Darkwing persona. He still has his signature hat, and cape, but now wears a (jump-suit like) purple costume with a dark belt, dark boots, large black gloves and heavy, spiky armor over his shoulders. His mask is also black now, and when he wears it his eyes glow red. His belt has a holster on it for his former gas gun. His entrance smoke is now red, instead of his normal blue smoke. Though this seems less like some form of technology and more of a way to visualize his insanity, since his eyes are normal the first time he sees Gosalyn even with the mask on.

While DarkWarrior Duck maintains his same amount of ego and love for crime-fighting as he did before, he has become far more ruthless in the pursuit of what he considers "justice". Even though DarkWarrior doesn't deem himself as evil and still has good intentions, he had strayed from the path of true heroism and became an extremely dark anti-hero. He wholeheartedly believes in the use of lethal force, does not bother to give criminals a trial, apprehends common civilians for the most minor of offenses and is liberal with giving out the death penalty in sharp contrast to Darkwing's non-lethal style. Even those who were once close to him are not safe from his wrath if they disagree with him, though he will hesitate to destroy them.

Being the future version of Darkwing Duck, DawkWarrior has all the same intellect and fighting skills plus experience. He also has greater resources at his disposal, including a legion of flying robots who follow his every command, a large tank (presumably in place of the Ratcatcher), the Thunderwing (loaded with guns and missiles), and his former gas gun (now a handheld missile launcher).

After Gosalyn accidentally got sent to the future in Quackerjack's Time Top with him and Megavolt inside, Darkwing had spiraled into depression, believing that she had run away out of frustration of not being allowed to help him catch criminals. When he sees a child that resembled Gosalyn in need, Darkwing decided to fight crime again, but this time with a much darker side. He ruled St. Canard with an iron fist (something the Fearsome Five had never done) and sent minor offenders to the electric chair instead of arresting them. He even fired his sidekick, Launchpad McQuack, for disagreeing with his new doctrine. With Launchpad, Gosalyn had defaced a statue of DarkWarrior to get his attention. Immediately, DarkWarrior fired a missile toward them, but stopped it when he saw Gosalyn.

He welcomed back Gosalyn with loving affection and arrested Launchpad, believing he put her up to vandalizing his statue. He decided to make Gosalyn his new sidekick, but arrested her when she disagreed with his doctrine and wanted to go back to the past so that DarkWarrior never existed. With Quackerjack's Time Top, DarkWarrior thought about going back in time and rewriting history to his iron-fisted image. Gosalyn had escaped with Quackerjack, Megavolt, Launchpad, and everyone else DarkWarrior had arrested, only for DarkWarrior to pull out his gas gun at her that he had turned into a missile launcher. He even declared that all her past misbehaviors meant that she was a bad egg from the start. He hesitated and stopped at the last second before Launchpad knocked him out, giving Gosalyn, Megavolt, and Quackerjack time to go back to the past and set things right.

Though Gosalyn returned home and it is assumed that the timeline DarkWarrior was from now never existed, he was meant to be brought back in season four before the show was canceled. Thus, it can be implied DarkWarrior now exists in an alternate timeline, much like how Negaduck existed in an alternate universe.

Darkwarrior Duck was one of the alternate Darkwings that were brought to St. Canard by Negaduck and Magica De Spell. He announced to the city that the War of Darkwings had begun and pointed his tank's barrel at Darkwing, but Morgana teleported him back to his house before Darkwarrior could fire. Later, when Quiverwing Duck was subduing the mind-controlled Darkwings, he ran into Darkwarrior, who had captured Professor Moliarty and Tuskernini.

Darkwarrior said Magica didn't have to hypnotize him, which is odd since Darkwarrior believes that what he is doing is good. Quiverwing took out the two robots Darkwarrior had with him and then destroyed his tank by plugging up the barrel with a cork arrow. Darkwarrior told Quiverwing not to bother with him and to help Darkwing, before he lost Gosalyn. He was presumably returned to his home dimension with the other Darkwings. 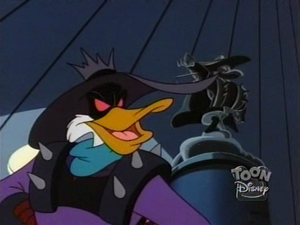 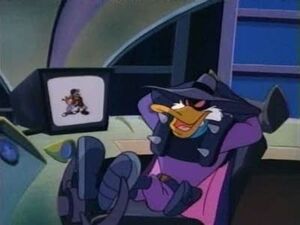 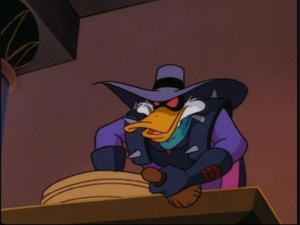 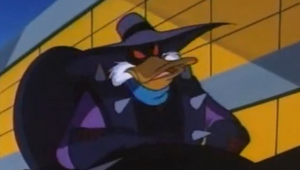 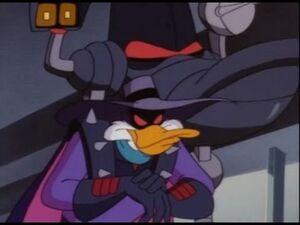 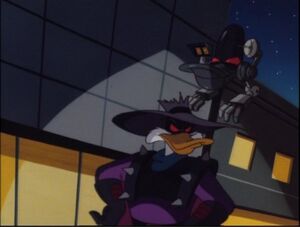 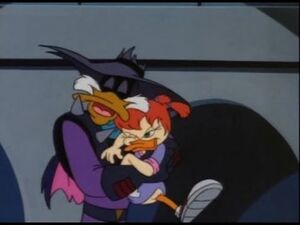 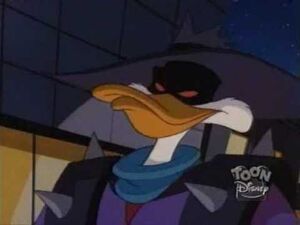 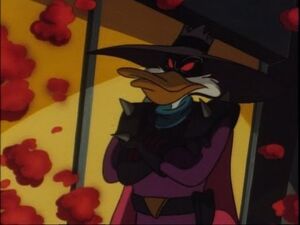 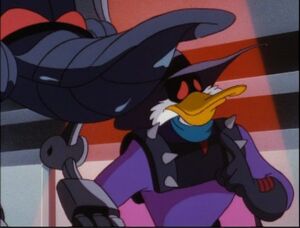 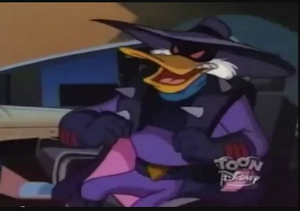 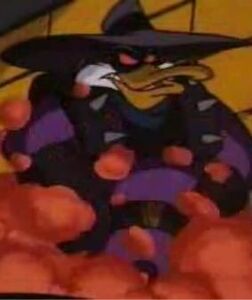 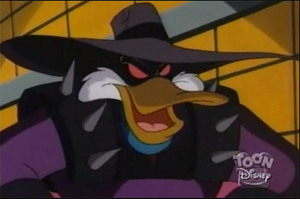 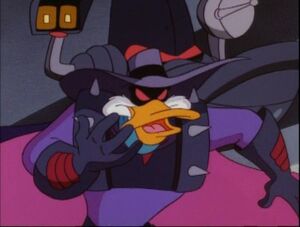 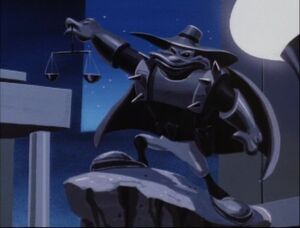 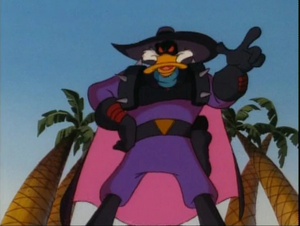 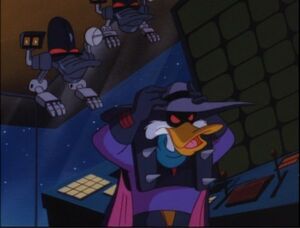 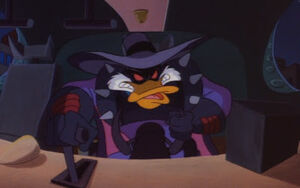 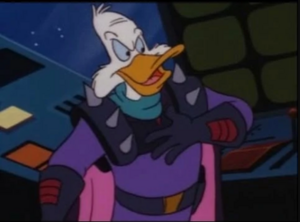 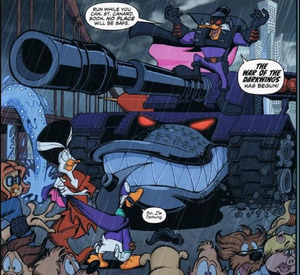