Manifestation of the dark half of Alessa Gillespie's soul

Killing those responsible for Alessa's suffering.

To avenge the torture and attempted murder of Alessa Gillespie (succeeded).

To destroy the cursed town of Silent Hill and everyone in it (succeeded).
To recombine with Alessa Gillespie's good side and be reborn (failed).

She is 9, 30, and 39 all at the same time. Her physical form is that of a 9-year-old girl, though her body's age is 30, as she first manifested 30 years before the events of the film. Because she comes from Alessa's soul, and Alessa is 39, Dark Alessa can also be seen as being 39 years old.

She is portrayed by Jodelle Ferland.

Sometime around 10 PM on the night of November 1, 1974, a young girl named Alessa Gillespie is burned alive by a group of religious fanatics who believe her to be a witch. The burning goes awry, causing a massive fire leading the cultists to abandon the sacrifical chamber, leaving Alessa alive, but with fourth degree burns over 100% of her body. After being taken to Brookhaven Hospital, Alessa's rage and hatred begin to spiral out of control.

Her hatred causes her to manifest extreme psionic powers, resulting in the flowers next to her hospital bed wilting. When a nurse named Lisa Garland looks into Alessa's burn tent out of curiosity, she lashes out, burning the nurse's eyes and making them bleed forever, staining her clothes. Immediately after that, Alessa's soul splits in two, causing the creation of Dark Alessa. Dark Alessa approaches Alessa, and promises her that she can help her to take revenge on the cult. Alessa gives in to her own dark side, and she and Dark Alessa create the Otherworld, an alternate reality infected by Alessa's dark side.

Dark Alessa uses the Otherworld and a horde of monsters under her control to torture and kill the cultists. In 1995, Alessa splits her soul a second time, and creates Sharon Da Silva, a doppelganger of herself containing her good side. Dark Alessa carries the baby Sharon to the Toluca County Orphanage, where she leaves her at the entrance to be found by Sister Margaret and adopted by her.

9 years later, Dark Alessa begins to appear to Sharon in her sleep, causing her to sleepwalk. Dark Alessa continues to call to Sharon, intending to bring both Sharon and her mother to Silent Hill, West Virginia, the town where Dark Alessa and Alessa reside and thus the events of the film happen.

In a sleepwalking fugue, Sharon Da Silva walks out of her house and to a steep cliff. As her mother calls to her, Sharon looks down and sees nothing but Dark Alessa, who seems to be beckoning her to throw herself off the cliff. At the last second, Rose Da Silva grabs Sharon and throws her to the ground, stopping her from falling to her death. The next day, Rose takes Sharon to Silent Hill, intent on discovering the cause of her illness. As Rose arrives on the outskirts of the town, Dark Alessa darts into the road, causing Rose to crash her car. Once Rose is knocked unconscious, Sharon is removed from the car, and Rose is shifted into the Fog World.

Dark Alessa appears to Rose almost immediately after she wakes up from the crash and into the streets of Silent Hill engulfed in the Fog World, luring her into a dark alley as the sirens in the town sounded upon the approaching Otherworld. Dark Alessa runs through a labyrinth of fences where she leads Rose to a live corpse strung on a fence, and the Grey Children that can burn Rose by touch. Rose comes across Dark Alessa again at Midwich Elementary School. As before, Dark Alessa leads her to clues pertaining to Alessa's past, starting from Alessa's classroom and ending in the girls' washroom. When the Otherworld overtakes the school, Dark Alessa appears to Rose in her natural form, with greasy, black hair, pale skin, and blood smeared on her mouth. Dark Alessa later leads Rose to the secret church-like chamber at the Grand Hotel where Alessa was burned alive, but she quickly catches fire and disappears, rather than telling Rose what happened in this sacrificial chamber.

At the Brookhaven Hospital in Alessa's sick room, Dark Alessa tells Rose "the truth", explaining Alessa's history and why Rose was brought there. She then tells Rose her most famous line throughout the film: "It's time for this dream to end, and so too must the dreamers within it. For over 30 years they (the cult) have lied to their own souls. For 30 years, they denied their fate. But now is the end of days, and I am the reaper." She also adds that it is time for the Brethren cult to suffer the consequences of their actions. Dark Alessa warns Rose that Christabella, the cult's leader, has likely found Sharon already, and that she intends to kill her. Desperate to save her child, Rose agrees to help Dark Alessa and Alessa to get their final revenge. Dark Alessa hugs Rose, allowing her body to merge into Rose's.

Rose then carries Dark Alessa into the local church, where she releases her thanks to a wound caused by Christabella. Dark Alessa's essence spills from Rose's wound that allows Alessa and Dark Alessa to appear in the church. There, Dark Alessa dances in the blood of Christabella as Alessa rips her apart with rusted barbed wire. As Alessa's revenge ends, Dark Alessa finds Rose hiding in the corner of the church, shielding Sharon's eyes from the carnage. Dark Alessa approaches Sharon and locks eyes with her, causing her to faint. The darkness ends immediately afterwards, and both Dark Alessa and Alessa disappear. After Rose and Sharon leave the church, Sharon gives a strange look to Alessa's mother, Dahlia Gillespie (who realizes that Sharon is now Alessa), and starts Rose's car with her mind, strongly implying that Dark Alessa has merged with Sharon, creating a full rebirth of Alessa living in Sharon's body.

Dark Alessa made a reappearance in Silent Hill's sequel Silent Hill: Revelation, taking the form of both a child and a teenager. She was portrayed by Erin Pitt. Her child form is seen in a flashback chasing cultists throughout the streets of Silent Hill and bringing the darkness with her upon the town, and later appears on the Happy Carousel within Lakeside Amusement Park. When Heather Mason, a renamed, older version of Sharon, returns to the town, Dark Alessa meets her on the carousel and then morphs into a teenaged version whose appearance and clothing match those of Heather. She and Heather recombine and become a complete incarnation of Alessa, allowing Heather to take control of the Otherworld before her ultimate confrontation with Claudia Wolf and her followers, the Order of Valtiel.

Dark Alessa appears to have the ability to shift her appearance at will, changing from looking identical to Alessa as a child to having a darker, more demonic appearance. She has the ability to be both tangible and intangible when she wishes, can appear and disappear at will, and also shows signs of extrasensory perception; as she is constantly aware of where Rose and the Brethren cultists are at all times. Also notable is Dark Alessa's silence when she takes the form of the regular child version of Alessa. When Dark Alessa takes on a normal appearance, she does not speak, but rather relies on rattling a fence, making jerky movements, and stomping loudly to catch Rose's attention. This likely is a reference to Alessa's inability to speak or scream after she was burned in the fire, given the heavy emphasis on Alessa's silence in both the theatrical poster and the script.

She is also shown to have possession of massive pyrokinetic abilities. She can ignite fire out of nowhere, demonstrated when she catches fire in Silent Hill, and again in Revelation when she burns Heather and sets a a massive group of members of the Brethren and its parent cult, the Order on fire. In all instances, her use of fire is symbolic of the torment of Alessa. When she catches fire in Silent Hill, she states, "Look at me, I'm burning", a clear reference to Alessa being burned alive by the fanatics. When she burns Heather in Revelation, Heather's form takes on a charred appearance, very similar to that of burned Alessa. In killing the cultists with fire, Dark Alessa is visiting the same suffering upon them that they forced onto Alessa.

Dark Alessa possesses a the power of essokinesis, capable of warping physical reality to suit her needs. She creates the Fog World and Otherworld as manifestations of the loneliness and anger of Alessa, and fills these worlds with horrific monsters born of Alessa's twisted psyche.

Dark Alessa strongly represents the Holy Ghost, a prominent figure in Christian beliefs. Like the Holy Ghost, Dark Alessa is created by a prominent God figure (Alessa), who splits off part of themself to exist as multiple entities. Dark Alessa also acts as a mouthpiece for Alessa, the same as the Holy Ghost is said in the Bible to speak for God. When she merges with Rose in the hospital, the scene acts as a metaphor for the impregnation of the Virgin Mary by the Holy Ghost. Further, the Holy Ghost is well recognized in the Bible as using the followers of God as a mouthpiece, possessing believers and literally speaking through them. This is seen when Dark Alessa merges into Rose and then speaks through her during the confrontation with the cultists. This symbolism is likely intentional, given director statements about the vast amounts of Christian symbolism found in the film. 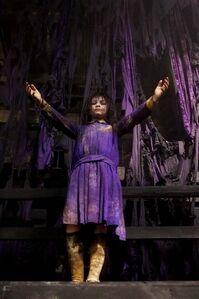 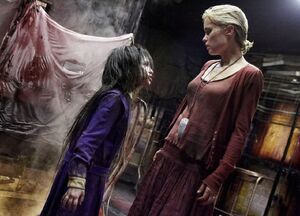 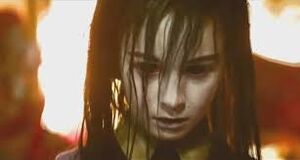 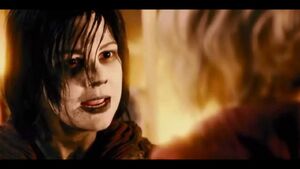 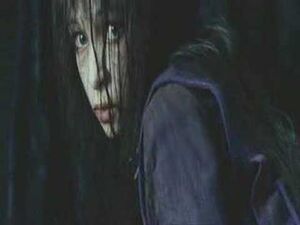 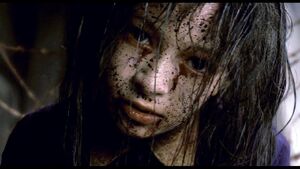