Destroy the Rebel Alliance (both succeeded)

The Dark Apprentice, also known as Starkiller, is a clone of Darth Vader’s secret apprentice, Galen Marek, that is completely dedicated to the Dark Side and a behind-the-scenes antagonist in Star Wars: The Force Unleashed II. He is also, in a sense, the villain protagonist of the game's Battle of Endor DLC.

Like his genetic template, he is voiced by Sam Witwer, who also voiced Galen Marek, played Mr. Hyde on Once Upon a Time, and currently plays Benjamin Lockwood/Agent Liberty on Supergirl.

The Dark Apprentice was created from the DNA of Galen Marek in the cloning facilities of Kamino as part of Vader’s attempt to create a loyal substitute for his former apprentice.

All clones before been had failures, due to genetic defects or inability to let go of Galen’s emotions and memories and at first, the Dark Apprentice too found himself dealing with his template’s memories. He was particularly fixated on Galen’s love for Juno Eclipse and upon awaking, he asked Vader about where she was. The Sith Lord replied that she didn’t matter and set about trying to train him. During the training, the Dark Apprentice asked Vader who Galen had been, but he never fully answered and just said his former apprentice was a weak and less powerful man. The Dark Apprentice excelled in his training due to inheriting his template’s skills and set out to surpass all the other clones. However he wondered how many failures had come before him and asked Vader. The Sith Lord didn’t answer, instead telling the Dark Apprentice that the only number that mattered was how many more clones would be needed if he was a failure as well, which he couldn’t do unless he gave up Galen’s emotions.

As time went by, the Dark Apprentice became able to separate his template’s memories from his own and overcome his emotions. With him having finally succeeded in this, Vader brought him to the room where he kept Galen’s body. The Dark Apprentice realized that the Sith Lord believed he would be the success he’d sought. In a fight with training holodroids, the clone demonstrated that he’d gone past his template’s emotions by cutting down one taking the form of Juno. The Dark Apprentice told Vader that he had nothing but disgust and hate for his weak template and he was proud that he had done what the other clones had not.

Non-canon Ending: The Rise of the Dark Apprentice

In an alternate ending, Starkiller tried to strike down Darth Vader, but before he could, the Dark Apprentice, using a cloaking device, stabbed him through the chest. He revealed himself and killed General Rahm Kota and the other Rebel soldiers. Vader congratulated the Dark Apprentice for his success and told him to find and eliminate all the remaining Rebels. The clone obediently went on his way, glancing briefly at the dead Juno Eclipse, but feeling nothing for her, before setting off in the Rogue Shadow. Much later, when the Rebel Alliance attacked the second Death Star from the forest moon of Endor, the Dark Apprentice was sent in to defeat the Rebel forces. He fought his way through the Rebels and the Ewoks assisting them and destroyed the Rebellion’s shuttle.

The Dark Apprentice eventually arrived at the shield generator base that the Rebels had taken over and faced off against Han Solo and Chewbacca in an AT-ST, successfully killing the two. The Dark Apprentice made his way into the bunker, cutting down both Rebel and Imperial soldiers. Eventually he came across Princess Leia Organa, who had become a Jedi after the death of her brother, Luke Skywalker, on Hoth.

The Dark Apprentice engaged her in combat, constantly overcoming her despite her even using the base’s machinery against him. Finally, he managed to slay her and sat down to meditate, before the Imperial forces started to advance on him, under orders of the Emperor, who had learned of the Dark Apprentice’s existence.

The Dark Apprentice possesses all the abilities and natural skill in the Force as Galen Marek. He is skilled in lightsaber combat due to his training on Kamino and he uses the dual lightsaber combat forms of Niman and Jar’Kai. The Dark Apprentice’s force abilities allow him to use telekinesis, unleash blasts of force, send out waves of Force lightning, and channel his negative emotions into a state of Force rage, increasing his abilities. 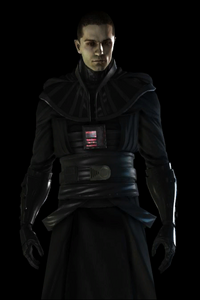 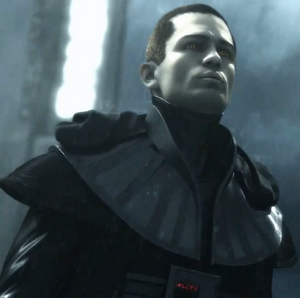 The Dark Apprentice on Kamino.
Add a photo to this gallery

Retrieved from "https://villains.fandom.com/wiki/Dark_Apprentice?oldid=4097019"
Community content is available under CC-BY-SA unless otherwise noted.