Führer of the New Reich

Oliver Queen, also known as Dark Arrow, is one of the two main antagonists (alongside Eobard Thawne) of the 2017 Arrowverse crossover Crisis on Earth-X. He is also the unseen overarching antagonist in the web series, Freedom Fighters: The Ray.

He is the Nazi version of Earth-1's Oliver Queen, the final Führer of the New Reich, the husband of Overgirl, and leader of the New Reichsmen. He hails from Earth-X and arrives on Earth-1 as part of an invasion force. Despite their plans of conquering Earth-1, his main motivation is to capture Supergirl in order to steal her heart and implant it into his dying wife.

Like his Earth One counterpart, he was portrayed by Stephen Amell.

Born on Earth-X, a world where the Nazis won WWII, Oliver was raised indoctrinated into the attitudes of the Third Reich. As every citizen on Earth-X, Oliver did not go to school but instead was part of youth groups and subjected to military training from an early age on. Like their Earth-1 counterparts, Oliver and Tommy Merlyn became best friends.

He eventually fell in love with the kryptonian refugee Kara Zor-El, known as Overgirl, and eventually married her. The two became a powerful couple in the Third Reich.

He alongside Thawne, Overgirl and other Nazis come to Earth-1 to attack the resident heroes during Barry and Iris' wedding.

At the end, he is saddened of the death of his wife and tries to shoot Earth-1 Oliver, but the latter shoots first. 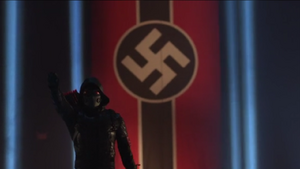 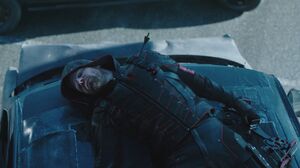