Each members possess their own super powers

Conquer Asgard.
Defend their "turf" that is called Earth.

Jingoistic Supervillains
The Dark Avengers are a group of supervillains who banded together under the leadership of the influential Norman Osborn, who was also the leader of the Thunderbolts and SHIELD. Osborn created the team to defend America after being appointed the new Head of S.H.I.E.L.D. after an invasion of the Earth by the alien Skrulls. Each of the members took on the identity of one of the Avengers. On their first misison they successfully defended Osborn's ally Doctor Doom from the demon hordes of Morgan le Fay. They were initially praised by the public as heroes, but soon showed their true colors. This group consists of about 21 supervillains.

Osborn formed an alliance with Loki and led the Dark Avengers in an attack and siege of Asgard. The Dark Avengers disbanded after this war and their final defeat by the real Avengers.

They battled the real Avengers many times throughout their career, as well as the X-Men.

After the invasion of the Earth by the alien Skrulls, Anthony Stark (also known as Iron Man) was ousted from his position as head of S.H.I.E.L.D. He was replaced with Norman Osborn (formerly known as the Green Goblin) due to his work with the Thunderbolts and the fact that he was the one that succeeded in killing the Skrull Queen Veranke. In addition to inheriting S.H.I.E.L.D., which he dismantled and reformed as H.A.M.M.E.R., Norman also inherited control over the Avengers. None of the then current Avengers, barring Ares and Sentry, were willing to work with him however, prompting Norman to form his own Avengers team, consisting mostly of the villains he had worked with in the Thunderbolts. Norman had these villains pose as known heroes, and took the identity of "Iron Patriot" (a blend of the heroic imageries of Captain America and Iron Man) for himself.

The team's first mission was to assisst Doctor Doom in reclaiming control over his homeland. While escorting Doom back to his home country of Latveria, the Dark Avengers came under attack by the evil sorceress Morgan le Fay. Morgan had come to the present to take revenge on Doom, and the Dark Avengers were caught in the middle. Morgan trivilaised their efforts to subdue her with her magic, but Doom and Osborn travelled back in time to Morgan's own time period, and disrupted the ritual that kept her in the present, trapping her in the far past.

After that, the group would fight renegade heroes at the time such as Clint Barton, War Machine and the Young Avengers. After realizing that Osborn's team was composed of supervillains, Noh-Varr, who was in the team under the alias of Captain Marvel, decided to leave. Osborn tried to stop him by sending Sentry to take him back but Noh-Varr managed to escape him thanks to new armor given to him by his Kree allies.

The team's next mission was to take care of the protests and social unrest in San Francisco after the X-Men led by Cyclops founded an independent nation at its shores. In order to appease the mutants, Norman created his own X-Men following the same method he used to assembe his Dark Avengers, with members such as Dark Beast and Mystique impersonating Professor X. The two groups ended up clashing but after being betrayed by his allies Namor and Emma Frost, Osborn and the Dark Avengers were forced to retreat and leave the mutants alone.

Some time after that, the team confronted Molecule Man after he had taken control of a little town. The supervillain trapped each member of the team in a nightmare-esque space until Sentry managed to defeat him. Back home, Sentry was shot by his wife Lindy, who was terrorized of his powers and of Sentry's poor control of them mainly due to his personality disorder and drug addiction. However, Sentry healed himself, now with the more evil personality known as the Void in control. Despite Sentry's attempts to retake control and stop the Void, the villainous personality began destroying New York until Osborn convinced him to stop. Osborn would then order Bullseye to kill Lindy to make Sentry more obedient towards him. However, that situation only added more stress to Osborn, which combined with Loki's own hallucinations, made him descent back into insanity.

Loki, one of Osborn's allies in the shadows, convinced the Iron Patriot of the danger of having Asgard on Earth (Asgard was floating over Oklahoma at the time). Loki claimed Asgard has to return to its rightful place among the Nine Realms, so he and Osborn tricked asgardian Volstagg into destroying a stadium full of people while deflecting an attack from the Dark Avengers. That gave Osborn the excuse to invade Asgard, but they found resistance from the asgardiands and the real heroes, who managed to defeat the Dark Avengers and take down Osborn. Ares, one of the members of the Dark Avengers, had been tricked by Osborn into helping him to take over Asgard, believing it had been conquered by Loki. Upon realizing his lie, Ares tried to attack Osborn only to be killed by Sentry (now controlled by the Void). A desperate Osborn then ordered the Void to destroy Asgard much to Loki's dismay.

Realizing he had gone too far, Loki decided to help the heroes defeat the Void, using his magic to power them up before being killed by the villain. In the end, the Void was defeated when Tony Stark dropped the H.A.M.M.E.R. helicarrier on him, forcing him back into his Sentry persona. The heroes then reluctantly killed Sentry to prevent the Void from regaining control.

After the battle, Osborn and the surviving Dark Avengers were arrested with the exception of Daken, who managed to escape.

Osborn eventually broke out of prison and took control of what remained of H.A.M.M.E.R.'s forces, assembling a new team of Dark Avengers with new supervillains such as Ai Pec, Gorgon or the Hulk's son Skaar. However, Skaar turned out to be a mole working for Captain America and, in the end, the team was defeated again, Osborn brought into custody, H.A.M.M.E.R. was disbanded and the Dark Avengers were sent to a parallel Earth by the Man-Thing while on their way to replace the missing Thunderbolts, in which they fought against warlord versions of Iron Man and Doctor Strange before managing to go back home. 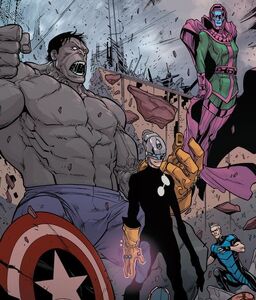 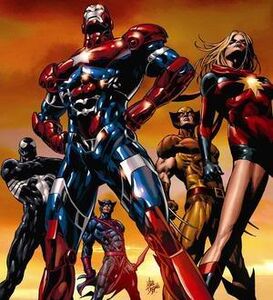 The Dark Avengers of Earth-616