Dark Beast is a villain from the X-Men series and he originates from the Age of Apocalypse time-line but managed to escape into the mainstream Marvel universe and has become a recurring antagonist - he is an evil version of the X-Men's own Beast and is a mirror-image of sorts to the hero: being nearly as knowledgeable but almost completely without redeeming qualities.

A murderer, sadist, torturer, and otherwise a complete monster, the Dark Beast worked in Apocalypse's slave-pens alongside Mr. Sinister but took manic glee in causing misery to his test-subjects, turning those who were deemed unworthy into genetic "soup" to be used as fuel for Apocalypse's hellish legions of the Infinite - his reputation was sufficient to earn him the name of "Beast" by many and he seemed to enjoy the fear he generated as he would proceed to mutate himself deliberately into a more bestial creature (in contrast to mainstream Beast, whose transformation was accidental).

Dark Beast would then manage to escape the Age Of Apocalypse before its destruction and began causing havoc in the mainstream Marvel universe, still thinking of others as little more than genetic play-things for his twisted mind - however he displayed a degree of frustration at how the mainstream Beast seemed to possess more knowledge than himself (this is due likely to the fact Dark Beast specializes in genetics while mainstream Beast has developed knowledge on multiple fields of science).

Dark Beast has sometimes disguised himself as regular Beast to cause chaos, killing many of Beast's friends - though he couldn't bring himself to kill Beast's parents, in anger over this he proceeded to brutally decapitate a civilian, Dark Beast has to dye his fur when disguising himself as mainstream Beast however as his fur-pattern is much darker (hence his name).

Dark Beast would also become a part of Norman Osborn's "Dark X-Men" where he fought more of Marvel's superheroes as part of the Dark Reign story-arc.

Dark Beast appears as a villain in the videogame X-Men: Rise of Apocalypse. Beast enters this villainous alter ego when he was under Mr. Sinister's mind control drugs and became a servant of Apocalypse, becoming the one who would betray his comrades according to what Mystique's friend Destiny foresaw, the prophecy of "The Four Who Are One". 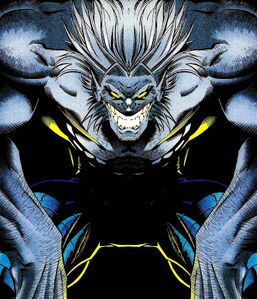 Dark Beast defeating Cyclops and Jean during the Age of Apocalypse.