Kirby and the Rainbow Curse

Clay manipulation
Able to shoot mines out his sunglasses

Killing anything that gets in his way.
Chuckling at Kirby getting hurt.

Drain all color from Popstar and possibly the rest of the universe for himself (failed).

Possess Claycia and use her sculpting powers to create minions (failed).

Dark Crafter (in Japanese: ダーククラフター, Dāku Kurafutā) is the main antagonist and final boss of the 2015 Wii U game Kirby and the Rainbow Curse. He is the one who possessed Claycia (who was thought to be the main antagonist while she was under his control), and forced her to drain the color from Dream Land.

Very little is known about Dark Crafter's origin. It is unknown where he came from or why he seeks to steal all colors. Prior to the start of the game, Dark Crafter possessed Claycia to do his bidding of stealing colors and using her sculpting skills to build an army.

When Claycia, the one he possesses, is defeated, the sunglasses he possess with her falls off. Angry that he lost control over her, Dark Crafter emerges from the sunglasses and flies off to steal all the colors himself. Little did he know, Claycia and Elline transform Kirby into a rocket and send him chasing after the monster.

Kirby and Dark Crafter have a long battle between each other. Kirby eventually wins, Dark Crafter magically explodes, and Claycia and Elline restore the colors that Dark Crafter stole from Popstar.

Dark Crafter soars diagonally through the cosmos. He attacks by launching mines from his sunglasses at Kirby Rocket. The mines are often released individually, in straight rows, or in ring formations. To attack Dark Crafter, Kirby must dodge the mines and collect the 10-Stars Dark Crafter flies past. After collecting 100 Point Stars, Kirby can Star Dash into Dark Crafter, damaging him. Each hit affected to Dark Crafter causes him to lose color and release more mines. Once he is hit three times, he loses all of his color and explodes.

Dark Crafter is a giant multicolored cloud-like blob with a giant eye and two floating hands that release magenta smoke every time he moves. He also has what appears to be tiny magenta sunglasses above his eye. When Kirby hits him, some parts of him revert to his true, Dark Matter-like appearance. 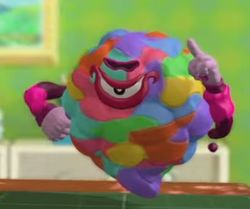 Dark Crafter with the other final bosses.