Dark Cure is a villainess who featured in Heartcatch Pretty Cure!, the seventh installment of Pretty Cure series. The character first appears in Tsubomi Hanasaki's dream, where she fights against Cure Moonlight before the Great Tree of Hearts. Although hurt, Dark Cure manages to get the upper hand in the battle, and succeeds defeating Cure Moonlight. She is later seen beside Sabaku whenever a Desert Apostle has audience with him, acting as his second-in-command. In the preview for the tenth episode, Tsubomi Hanasaki and Erika Kurumi claim that Dark Cure has lost her heart, though it is unknown if this will have a deeper meaning later on. In the thirteenth episode, Dark Cure says to Yuri Tsukikage that she is her. She claims that she is the "shadow" of the moon, and that Yuri is the "light" of the moon. She is desperate to destroy Cure Moonlight once and for all, and will not remain calm until she manages. It is revealed that she was created by Sabaku.

Dark Cure is pale white and usually has her left eye close, she has two color eyes the left is gold and the right is blue. Dark Cure wears a short black dress (and like Cure Moonlight) she has a black ribbon band with white lace on her left wrist of the other Precures and a long glove on her right arm. Dark Cure has one black "dragon" wing on her left shoulder. She has short dark teal hair that curls up a little, similar to Cure Moonlight's bangs, and has three red spike-like hair clips.

Dark Cure has a antagonistic rivalry with Cure Moonlight and has a deep conscious of defeating her competition and wants to eliminate her once and for all and very desperate. She is very mysterious, stoic, calm, but deadly in battle.

Before the Tree of Hearts

Throughout the rest of the time afterward, Dark Cure is seen beside Sabaku in the base of the Desert Apostles, always observing whenever someone comes to for an audience. Although she did not give any reactions herself when the news of a new Pretty Cure is revealed, she is told to go and fight them when Sabaku's henchmen continue to lose. Using her own status as a Pretty Cure, Dark Cure attacks innocents known to Tsubomi and Erika in an attempt to ruin the reputation of Cure Blossom and Cure Marine. When the two girls meet Dark Cure, she captures Chypre and Coffret and orders Tsubomi and Erika to bring her the Heart Pot. Tsubomi and Erika left with no choice, but with the help of the mysterious guy, the two girls rescue their fairy partners and fight Dark Cure. The pair are quickly beaten by Dark Cure, but as Dark Cure moves in to make the final move, Yuri appears behind them. Dark Cure realises Cure Moonlight survived their last battle and leaves Tsubomi and Erika. Her victory caused Tsubomi to lose her confidence for a while afterward.

Wanting nothing more than to destroy Cure Moonlight, Dark Cure attacks the train station where Yuri's mother works, attempting to draw Yuri onto the battlefield. She succeeds in her aim with Yuri, prooving a match for the Snackeys even without the ability to transform into Cure Moonlight. Before Dark Cure can destroy her, however, the mysterious guy appears again to defend her, and when she is about to track her down once more, Pretty Cure appears to fight her. When she defeats them once more and about to finish them off, Sabaku orders her to return to their base and to leave Yuri alone.

Some time later, Sabaku orders Dark Cure to locate the Tree of Hearts. She succeeds, only to discover a new fairy has been born and it uses its power to escape with the tree. Knowing Pretty Cure would go to the tree to repair the barrier, she follows them there. Dark Cure battles Pretty Cure and manages to fight them off easily, regardless of them now having Cure Sunshine to increase their numbers. However, Cure Blossom, Marine and Sunshine manage to push her far enough away from the tree long enough for Cure Sunshine and Potpourri to repair the barrier. The battle ends with the Tree of Hearts teleporting away with Pretty Cure.

With Dark Cure in possession of three quarters of Yuri's Heart Seed Dark Cure started to become obsessed with seeing Yuri destroyed. When the Heart Seed begins to glow Dark Cure suspects something is about to happen to Yuri and begins a search for her using the Heart Seed as a beacon drawing her closer to Yuri. When the signal stops due to Yuri going to the Great Heart Tree Dark Cure begins a battle with Cure Blossom, Marine and Sunshine. She quickly proves they are still not powerful enough to match her power and is ready to finish the fight when light from the Great Heart Tree makes the trees all around glow with light. Yuri appears and transforms into Cure Moonlight once again. The two Cures fight equally matching each others attacks, during the battle Cure Moonlight asks why is Dark Cure so obsessed with her to which Dark Cure replies that is Cure Moonlight is the light from the moon she is the darkness. Using their Fortissimo attacks against each other they fight across the sky until Cure Moonlight manages to score a blow which causes Dark Cure to fall to the floor in pain and unable to move. Just before Cure Moonlight has a chance to end the battle Sabaku appears and removed Dark Cure from the battlefield.

Sabaku had Dark Cure in a massive orb to help her recover from her loss against Cure Moonlight. He says that it will soon be time for her, a remark which causes her to give an evil grin. When the Cures are ready to defeat Cobraja, Dark Cure appears, catching them off guard. She opens her eyes which are now both gold in color revealing she no longer has heterochromia. This unleashes a massive amount of power from her which easily throws Blossom and the others to the ground. She collects Cobraja and leaves the battle.

After Cure Moonlight recovers from shock, she defeats Dark Cure with the Floral Power Fortissimo. Dark Cure falls to the ground, the gemstone on her chest breaking. She hobbles over to the direction of Cure Moonlight, but Professor Sabaku catches her in his arms and tells her that she can rest now. Dark Cure then fades away into light, but not before smiling and giving the other half of Cure Moonlight's Pretty Cure Seed back.

Dark Cure appears to be a very formidable opponent, even to Pretty Cure themselves. She is able to generate red shields that are powerful enough to defend herself against Pink Forte Wave with ease. They can also be used offensively, but still with great force. Furthermore, her closed gold eye, once open, seems to have the ability to drastically strengthen her attacks, and can also create violent gusts of winds to throw back the opponent.

With her Dark Tact, she can use Dark Forte Wave and Dark Power Fortissimo. Both attacks seem to be stronger than the Pretty Cure's versions, making her nearly unbeatable. However, Cure Moonlight is able to fight in par with her, and once she regains her Heart Flower, Cure Moonlight can even defeat her. 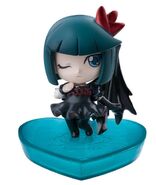 Retrieved from "https://villains.fandom.com/wiki/Dark_Cure?oldid=3520925"
Community content is available under CC-BY-SA unless otherwise noted.