Destroying Amity Park and other places in the world.

Ensure that his younger self becomes him (failed).

Destroying Amity Park and other places in the world (succeeded, but then failed).
Escape the Fenton Thermos (ongoing)

He was voiced by Eric Roberts, who also played The Master in the Doctor Who film, Sal Maroni in The Dark Knight, Mongul in Justice League and Justice League Unlimited, Dr. Albert Beck from the Stalked By My Doctor films, and James Munroe in The Expendables.

In the original timeline (before Clockwork intervened), Danny Fenton used his powers to cheat on the Career Aptitude Test. However, Danny's teacher, Mr. Lancer who'd been suspicious of him, asked his family to come to the Nasty Burger for a meeting. Sam and Tucker were also there, but the Nasty Burger's vat of condiments exploded, killing everyone present except Danny.

Left orphaned and alone by the tragedy, Danny was forced to move in with Vlad Masters, since no one else could understand his situation and despite the hatred that the two had shared for each other prior, Vlad treated Danny with great sympathy and they eventfully bonded. However, Danny couldn't deal with the guilt anymore and asked his former archenemy to remove his ghost powers, believing that it was responsible for the deaths of his family and friends as wella as former teacher. He also thought that his ghost half would be free of all emotion, ridding him of the pain and guilt that he was feeling.

Vlad agreed to help and tore Danny Phantom out of Danny Fenton with the Ghost Gauntlets, but after the procedure, Danny Phantom turned hostile and did the same to Vlad. He then bonded with his ghost half, resulting in the two selves fusing together, with Danny's ghost half as the dominant personality. As a result, Vlad's evil overwhelmed and destroyed any humanity that Danny Phantom may have had and as such, Dark Danny was born. Now, no longer possessing any empathy or remorse, Dark Danny responded by brutally murdering his former human self before blowing up Vlad's mansion. With that mission complete, Dark Danny then flew off to unleash a ten year period of destruction throughout the Human and Ghost Worlds while heartlessly torturing his human counterpart's former foes.

When the Observants saw the terrible future that Dark Danny had unleashed, they commanded Clockwork to destroy Danny in the past so as to prevent Dark Danny from ever coming into being. However, the time ghost instead sent in various future ghosts that set off a series of events that caused Danny to end up in the future to confront Dark Danny, who was reducing the future Amity Park to rubble, having finally gotten through its ghost shield with his Ghostly Wail power. Danny was no match for his evil older self and eventually Dark Danny fused him with a time medallion that trapped him in the future so that the half-ghost wouldn't be able to stop him from coming into being.

Realizing that Clockwork was trying to stop Danny from turning into him, he threw his past self into the Ghost Zone to make sure he stayed out of the way and then transformed himself into a fourteen year old version of his human self. Dark Danny used another time medallion to go to the past to ensure the events that created him would happen, however Danny's sister, Jazz, found out what he really was.

He successfully cheated on the C.A.T. using the answers (which Danny had obtained earlier by accident), causing Lancer to call his parents over to the Nasty Burger as a demonstration of what awaited those who failed the test.

Sam and Tucker came to try and warn them of the imminent explosion and Jazz arrived, proceeding to use the Fenton Ghost Peeler to reveal Dark Danny. He managed to used ectoplasm to trap them on the condiment vat,which was coming close to exploding, but then Danny Phantom arrived, having succeeded in getting the time medallion out of him with help from the future version of Vlad.

Dark Danny could not kill his younger self, since he needed to ensure his existence but only had to hold him off until the sauce exploded. They fought but even with the Specter Deflector and Ghost Gauntlets, Danny couldn't defeat his evil older self.

However his determination to save his family and friends caused Danny to unleash the Ghostly Wail power, which he had used earlier while under attack by future versions of ghosts he had fought. This shocked Dark Danny, since he was not supposed to gain that power for another 10 years and Danny told him that the future apparently was never as predetermined as he'd thought. He unleashed a second Ghostly Wail that blasted Dark Danny into a building, who emerged extremely battered and weakened and was trapped in the Fenton Thermos.

However, he pointed out that Danny was too late to save his family and friends in time, but Clockwork's intervention saved them and he sent the half-ghost back to before the test so as to give him a chance to change his future. Danny then gave the test answers back to Mr. Lancer. Therefore creating a new timeline where Dark Danny was never born and all the harm he cased was erased.

The time ghost then took charge of Dark Danny, who now existed outside of the time stream since Danny would never become him. At the end, he was seen smashing against the sides of thermos, apparently attempting to escape. Since he was laughing it possible he planned it so that next time he will kill Danny for good.

Dark Danny himself is completely heartless and utterly callous, and while the other Danny Phantom villains had some level of morality, he has nothing of the sort, making him the most evil villain in the show. He is brutal, sadistic, destructive, ruthless, misanthropic, vicious, and remorseless, as well as being perfectly willing to kill anyone, even if they were people his human self cared about, in order to fulfill his own goals.

Dark Danny is also highly prideful, cocky, arrogant, and egocentric, most likely because there was no one in the future able to fight him, and this made him underestimate his younger self. As such, it was his arrogance that proved to his major weakness, as it led to his defeat by his younger self. He proved just as inhumane and merciless to even his fellow ghosts, as he injured, scarred, or otherwise deeply embittered many of the villains in the series in his realm.

For all his pride and arrogance, he is also very intelligent, manipulative, and persuasive, as he was able to fool his younger version's friends in his world into thinking he is the one true Danny, at least for a brief time until he revealed his true colors. He is also shown to have a rather warped and sadistic sense of humor, as he quipped to his younger self's parents, "Hello? Danny Fenton? Danny Phantom? Ever notice the similarity?", though this could have been to sadistically taunt at his parents rather than make a joke.Thus, his attempts at humor make him more henious than anything else.

Though he comes off as sadistic and arrogant by heart, he is also actually capable of fear, as he was stunned to see his counterpart developed the ghostly wail, a power that he wouldn't develop for a decade and was seen worried when Danny used it on him a second time.

Dark Danny has the combined powers of Danny Phantom and Vlad Plasmius at his command, making him extremely powerful. Similar to his good counterpart, he can sense nearby ghosts and half-ghosts with red wisps of mist emerging from his nose when one is nearby. Dark Danny's ghost powers grant him superhuman strength, speed, agility, and durability and he can fly and turn invisible and intangible. This along with his experience made defeating his past counterpart an easy task before his pride led to his downfall.

His most powerful attack is his Ghostly Wail, a powerful shriek of sonic force that sounds like moaning ghosts and can use it more than once without losing energy, unlike Danny who can only use it one or two times before feeling a severe energy drain. Dark Danny has a wide variety of powers and can possess other people, fire ectoplasmic energy blasts, unleash a pseudo-electrical attack to shock people, generate an ectoplasmic energy shield, create duplicates of himself, form bonds made of ectoplasm, teleport, shape-shift into a version of his younger self, create portals to the Ghost Zone, manipulate the shape of his body, use a sleep beam to knock people out, turn into ghostly vapor, and fuse objects into beings with his intangibility powers, making it unreachable by human or ghost means. That said, while he is powerful, him getting defeating by his younger self's Ghostly Wail proved that he has limits. Even then, that was only because he understimated him. 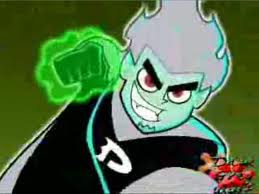 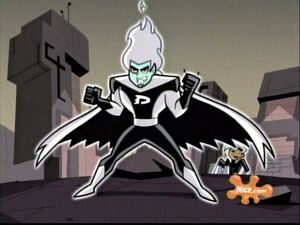 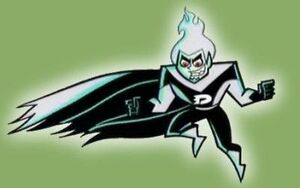 Dark Danny in the air. 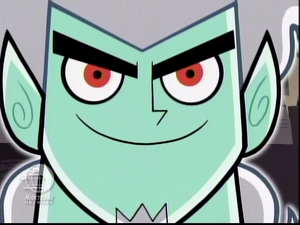 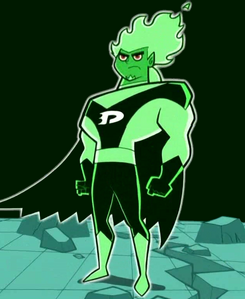 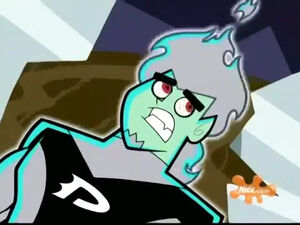