Can remain undetected until it is too late

Kill off all of humanity in a world without electricity which will strengthen them (partially succeeded).

The Dark Demons are the main antagonists of the Creepypasta story "Light No More".

In the story, electricity begins failing, such as computers and TV would switch off. This is implied to have been caused by something supernatural. The darkness then gradually descends, as more and more electricity stops working, until finally humanity "has been thrust 500 years back". Everybody goes mad, governments collapse, and the Army and organizations stop working.

The protagonist, a marine, realizes that technology was actually good, he just never appreciated it at the time because he realizes with its loss that it kept humans sane, and stopped riots, mass death and mass murder. With technology and electricity gone, this is what is happening in the world.

Soon corpses litter the streets, many killed by humans, but there are some that look like they've been skinned or eaten alive. Too sickened by what he believes is the worst of humanity, the protagonist becomes a misanthropic man, wanting nothing else to do with his species.

But soon the marine realizes what has been killing these people - in the dark his house is broken into by a soldier and then a monster. The monster is illuminated briefly and revealed as a large black demon, with glowing white eyes and gore-filled fangs. It eats the soldier, who is seemingly swallowed by darkness.

The marine then realizes what has been killing the humans who have been eaten. Soon he realizes that light is fatal to the demons; he saw one marine brandishing a torch at the demons, and killed one, who burned to nothing upon being hit by light. It left a scorch mark.

But a storm breaks and the demons snuff out the light and eat the man. The marine shelters inside, trying to ignore the demons, but is relieved when lightning happens and destroys seventeen demons.

But for all he knows there could well be millions of the demons, and tonight they'll be back again, but he'll be prepared. 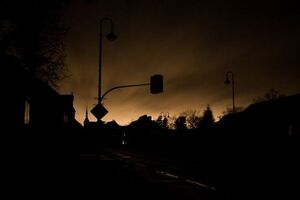