All kinds of powers and energy draining

Swallow all of the Light in the world and plunge it into Darkness and take over it.

The Dark Emperor, formerly known as the Dark Lord, is the main antagonist in the Find Mii series. Though he is the mastermind behind the events of the series, he does not appear until the end, where he acts as the final boss of Find Mii II.

After the defeat of the Ultimate Ghost, the Dark Lord swoops down and grabs the Monarch by the tail. He plans to swallow up all the light in the world, transforming it into a land of darkness. He is defeated by the Hero and explodes.

The Dark Lord reappears in the Secret Quest mode in a more powerful form, dubbed as Dark Emperor, after gaining a tremendous boost in power. He plays the same role as he did in the first game where he is defeated once more by the Hero.

The Dark Emperor also appears in the Find Mii stage in Super Smash Bros. for Nintendo 3DS, acting as a pseudo-boss. From the background he can use magic to either increase or decrease the fighters' stats. He can also create an earthquake to destroy either of the two platforms temporarily. He will sometimes come foreground to face the fighters. He attacks by roaring to produce soundwaves. Defeating the Dark Emperor grants the fighter that dealt the final blow a temporary increase in stats. He will respawn after a few minutes have passed.

The Dark Emperor reprises its role in the Find Mii stage as the stage boss.

The Dark Emperor also appears in Ultimate as a spirit, which is a legendary shield-type primary spirit. His Spirit Battle is against a giant Ridley on the Find Mii stage. The Dark Emperor boss hazard also boosts Ridley's stats. Alternatively, he can be summoned using the cores of Prophet, Vaati, and Necrozma. 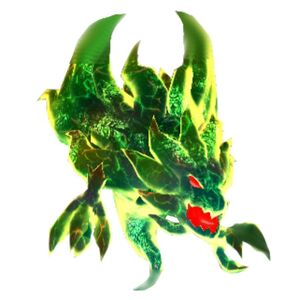 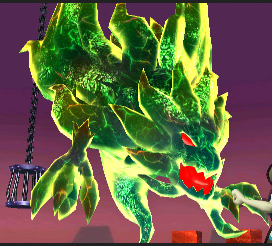 The Dark Emperor as seen in Super Smash Bros. 4.