All powers of all villains

Conquer the universe and all existence

The Dark Emperor (in Japanese: ダークエンペラー "Dākuenperā" or 闇の皇帝 "Yami No Kōtei") is the main villain of Samurai Shodown V. A powerful demon, the Dark Emperor offers unlimited power to those who seek him, then possessing them to satisfy his own bloodlust.

600 years before the game's events, this evil spirit had possessed Liu Yunfei, a martial arts master, making him go berserk and go on a killing spree. Yunfei was finally stopped by his students, who imprisoned him into a stone. However two of the students, Enja and Suija, ended up becoming demons as well due to the Dark Emperor's influence.

He finally leaves Yunfei's body after 600 years, possessing Gaoh Kyougoku Hinowanokami. Yunfei, now free from the stone seal, goes after Gaoh intent on sealing the Dark Emperor. Once Gaoh is defeated, Yunfei draws the Dark Emperor into his own body and pledges for Gaoh to kill him. With Yunfei's death, the Dark Emepror is sent back to Makai. 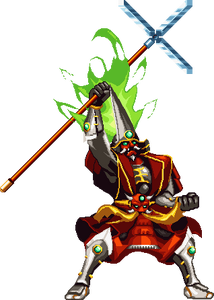 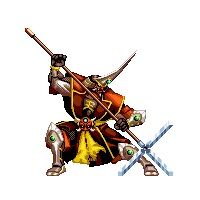 The Dākuenperā aka the Dark Emperor.