Fulfill directives given by Dakar (Dark Bloom, abandoned after turned back).

Fulfill directives given by Wizards of the Black Circle (Mitzi, Sally and Darma).

The Dark Fairy is an evil Fairy. However some Alfea Fairies have been shown having bad behavior and manners during their revenge, been more on the bad side without really turning evil, but they still remained normal Fairies and did not become Dark Fairies.

A Dark Fairy is either a Fairy who has turned to evil or whose powers become fueled by Evil and Darkness more like a Witch's powers while the powers of normal Fairies are fueled by Light.

A Dark Fairy can also be a person who is able to become a Fairy but instead of gaining good magic gains evil magic. It seems that an evil spell is needed to turn people into Dark Fairies, like Lord Darkar turned Bloom into Dark Bloom or when the Wizards of the Black Circle turned Mitzi and her friends into Dark Fairies.

Just like Witches, the bad nature of Dark Fairies' powers are shown by their dark clothing.

The first time a Dark Fairy was shown was in Season 2 when Bloom was turned into an evil Fairy by the fake professor Avalon at Alfea.

Mitzi, Sally and Darma as Dark Fairies also appeared in Season 4, when the Wizards of the Black Circle turned Mitzi and her friends Sally and Darma into evil Fairies. It was their magical powers which were then fueled by Evil and Darkness that made them evil (with help of their own bad feelings). They caused negative feelings to appear in the hearts of nearby people in opposition to Believix which causes good feelings to appear in the hearts of people.

However the Winx helped the nearby persons and used the power of their Believix to cause good feelings to appear in the hearts of the people. This weakened the evil powers of Mitzi and her friends, which were fueled by the bad feelings of people, till their Dark Fairy powers were destroyed and the spell of the Wizards broken. Mitzi and her friends then turned back into normal humans, but could no longer remember anything from when they were Dark Fairies, and possibly from when they met the Wizards, though it could be that it was a ruse by them so that they do not have problems. 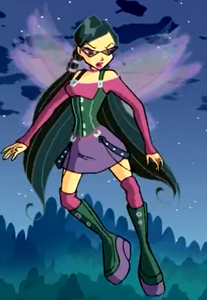 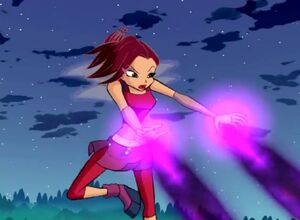 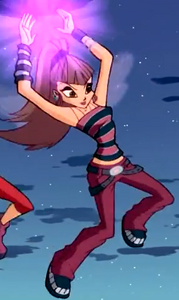 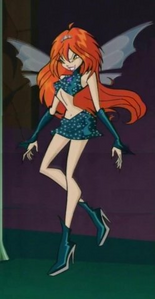 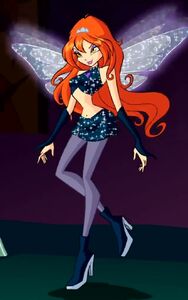 Dark Bloom Nick Version.
Add a photo to this gallery
Retrieved from "https://villains.fandom.com/wiki/Dark_Fairies?oldid=3146657"
Community content is available under CC-BY-SA unless otherwise noted.