Cause destruction, despair and harm upon others (failed).

Dark Gaia's Minions are a species of supernatural monsters and are the central antagonists in Sonic Unleashed. They are energy fragments of Dark Gaia, having gained physical form and life of their own after its premature awakening caused it to disperse across the shattered Earth. They serve as the enemies fought by Sonic as the Werehog in the nighttime stages of the game.

Dark Gaia's Minions are a very diverse in terms of anatomy, coming in a variety of different shapes and sizes, ranging from the insectoid Killer Bees, to the anthropomorphic lizard-like Nightmares, to the towering and cyclops-like Titans. Physical characteristics they share are usually freakishly appearances, blackish blue skin, and glowing body markings in different neon colors. Stronger variants of them though possess neo red skin. Their bodies are all completely composed of Dark Gaia's energy.

Dark Gaia's Minions lack any traits of sentience and operates solely on an innate desire to cause destruction, despair and harm to others. As such, they are very hostile and aggressive, attacking everyone that comes anywhere near them. They are also naturally compelled to cause psychological problems in other beings by possessing them and drive them to perform irrational actions and strange behavior.

As the night and darkness are their element and they cannot withstand light, Dark Gaia's Minions are exclusively nocturnal creatures and only comes out at night.

For many of Dark Gaia's Minions, there exists an empowered version of it, such as the Dark Fright and the Red Fright. These Dark Gaia's Minions are usually born from stronger forces related to those that created their weaker counterpart and are both stronger and tougher. These variants can be recognized by their neon red skin with cyan markings.

Dark Gaia's Minions as a whole possesses a diversity of powers, with each variant possessing their own specified selection of powers, such as elastic limbs, flight, reproduction, or even energy projection for power argumentation or devastating attacks. Humanoid members of Dark Gaia's Minions, such as the Nightmare variant, the Master variant and the Titans, have profound skills in hand-to-hand combat, and can be dangerously ruthless fighters, while more animal-like members simply attack by biting or stinging.

The level of physical abilities between Dark Gaia's Minions differs greatly between their rank; lesser members are very weak and slow, while more evolved members can be much stronger and faster. In other words, the bigger and/or more monstrous the Dark Gaia Minion, the more powerful it is. The most powerful members tend to have abilities that reaches superhuman levels, such as super strength, super speed and other excessive abilities.

A common power amongst Dark Gaia's Minions is their ability to terrorize humans on a psychological level by literally possessing people and directly generating despair, negative emotions or even erratic behavior that are completely opposite to the person's personality, by latching onto the deepest, darkest part of the heart. An example of this is when the Ice Cream Vendor in Apotos starts to have a nervous breakdown when Sonic and Chip meet him again at night. People that are possessed by Dark Gaia's Minions have small purple clouds emitting from them. Each of Dark Gaia's Minions can also teleport to another location in a puff of purple smoke or emerge from black puddles on the ground. When Dark Gaia's Minions are defeated in battle, they dissolve back into energy form.

Dark Gaia's Minions have certain unique weaknesses. They cannot handle sharp sources of light which tend to weaken them or at least disturb their powers. As such, they can be exorcised with the light from the blitz of a camera. Also, if a person possesses a strong enough will, the psychological-changing effects from Dark Gaia's energies are nullified.

The entirety of Dark Gaia's Minions were created in the beginning of Sonic Unleashed. Seeking to harness Dark Gaia's limitless energies to construct Eggmanland, Dr. Eggman sought to awaken the entity within Earth's core. As such, the doctor lured Super Sonic into his Chaos Energy Cannon and used the power of the seven Chaos Emeralds to force Dark Gaia to emerge from its slumber prematurely. However, because Dark Gaia had yet to reach full maturity inside the Earth's core when Dr. Eggman awoke it, it was unable to support the weight of its own mass when it rose form the core, and as a result, broke into countless energy fragments that scattered across the globe. It was from these fragments Dark Gaia's Minions were born from.

From this point on, Dark Gaia's Minions began to terrorize the world as monsters that would appear at night and endanger the safety of Earth's people, and making Sonic's quest to restore the world back to normal more difficult as well. This continued for some time, until Dr. Eggman, being the one at fault for the sudden appearance of these monsters, devised a machine that created a homing beacon which could make all of Dark Gaia's Minions converge in one spot, so that he could rebuild Dark Gaia.

At the time Sonic (as a Werehog) and Chip confronted Dark Gaia in the core of the planet, the beast had presumably reabsorbed all of its rouge minions in order to restore its being. When Perfect Dark Gaia then was defeated by Super Sonic and the Gaia Colossus, it was then sent back into dormancy and sealed in the Earth's core with Dark Gaia's Minions sealed along with it.

Dark Gaia's Minions also appear in the Sonic the Hedgehog Comic Series and its spin-off comic series' published by Archie Comics, where they are called Dark Gaia Monsters. In this media, they began appearing around Sonic's World during the Shattered World Crisis where they would appear at nighttime, and are tied to a dark energy leaking from the planet. They first appeared in Sonic Universe #63 where a group of them ambushed Knuckles, but were defeated by Knuckles and the Chaotix. 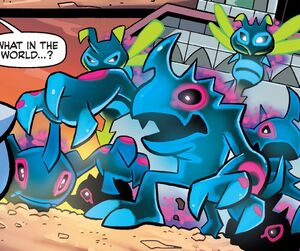 The Dark Gaia Monsters in the comics