Capture Princess Vespa, so that he can persuade her father to give up Planet Druidia's air shield combination lock (succeeded).

Steal the air from Planet Druidia to save Planet Spaceball (succeeded, but later failed when Lone Starr put the vacuum in reverse.).
Kill Lone Starr (failed).

Dark Helmet is the central antagonist of the Star Wars spoof Spaceballs. He is a parody of Darth Vader. He holds grudges easily, especially with his archenemy Lone Starr, and seems to make an enemy out of everyone.

He was portrayed by Rick Moranis, who also played the Toy Taker in Rudolph the Red-Nosed Reindeer and the Island of Misfit Toys.

When Planet Spaceball began to run out of the air, President Skroob sent Dark Helmet to kidnap Princess Vespa from the planet Druidia to ensure her father King Roland would give up the code to the air shield so they can suck out all the air and save the planet. He led the ship Spaceball-One with his right-hand man, Colonel Harland Sandurz. During this time, he also desired to have bounty hunter Lone Starr killed.

Upon arriving at Planet Druidia, Dark Helmet ordered that they wait until Princess Vespa leaves the planet. Once she did, Dark Helmet had Spaceball-One capture the Princess' ship. However, unbeknownst to him, Lone Starr and his partner Barf saved Princess Vespa after literally jamming their radar. Infuriated by this, Dark Helmet ensured a pursuit. After the bounty hunters went into light-speed, Dark Helmet, much to the shock and concern of his crew, ordered they go into 'ludicrous speed'. However, they accidentally go light-years past the bounty hunters, and after ordering an immediate stop, Dark Helmet crashed into some computers and say they take a "five-minute break".

Later, Dark Helmet and Sandurz continue searching for the protagonists. After no success, Sandurz brainstorms that they use a videocassette of Spaceballs: The Movie, breaking the fourth wall and surprising Dark Helmet. Using the cassette, they see a part of the movie that was happening that their exact time, breaking the fourth wall again, and also confusing Helmet. However, the plan with the cassette did eventually work and they found them on the desert moon of Vega. After arriving, they follow Skroob's orders to "comb the desert", although they were being too literal. As night felt, Helmet eventually found their hideout through the presence of fellow Schwartz user Yogurt, who was far more powerful than Helmet. However, Helmet tricked Vespa and lured her and Dot Matrix outside and therefore captured them both.

Before returning to Planet Spaceball, Dark Helmet was secretly playing with dolls of himself, Vespa, and the other protagonists. He was interrupted by Sandurz who informed him of their arrival to the planet's capital, Spaceball City. Upon arriving, Dark Helmet threatened King Roland to give up the combination lock to the air shield, or a plastic surgeon would give Vespa back her old nose (which was not a pleasant sight). Roland gave up the lock, which was 1-2-3-4-5, which Helmet said: "was the kind of thing an idiot would have on his luggage". After Skroob arrived and telling him a combination lock, he confessed he had the same lock on his luggage, much to the shock of Helmet and Sandurz. They then left the planet and headed for Planet Druidia.

After arriving at Druidia and opening the air shield, they had Spaceball-One transform into "Mega-Maid" and proceeded to suck out all of Druidia's air. However, just as they were almost successful, Lone Starr used the Schwartz to reverse the air back onto the planet. Dark Helmet then became aware of Lone Starr breaking into the ship. He then confronted Lone Starr and they then battled in a Schwartz-saber duel. Helmet then tricked Lone Starr into threw away his ring, saying that "good is dumb". Just as he was about to deliver the final blow, Lone Starr deflected a Schwartz laser back at Helmet's balls, which forced him into the self-destruct button. In the heat of panic, all of the escape pods were taken by everyone except him, Sandurz and Skroob. After learning of a cancellation button, the three tried to use it, but it was "out of order". Mega-Maid then blew up, but the three were left floating adrift in Mega-Maid's intact head.

Much later, the head crashed onto a distant planet (a parody of Planet of the Apes). The three then climbed out of Mega-Maid's nose. This was witnessed by apes who said "Oh shit. There goes the planet". It is unknown what happened to Helmet, Skroob, and Sandurz afterward.

Dark Helmet will attack anyone who threatens his power by use of the Schwartz (parody of the Force). He sticks his hand out and sends out a laser with his all-powerful, mystical ring. Whatever motion he makes with his hand will happen to the person. One example is the laser shot to his minion's groin and if you watched carefully he closes and rotates his hand. Because of this, whenever he confronts one of his minions, they cover their groin. 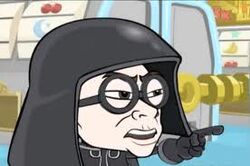 He was once Panakin Crybaby but became Dark Helmet because he needed the president to make a helmet for him to cover up a bump on his head (according to the animated series).

He is a lot shorter than he was in the movie.